December 22, 2020       Comments Off on [Briefing] Year’s End Brings No Letup in China’s Persecution of Rights Activists and Citizen Reporters 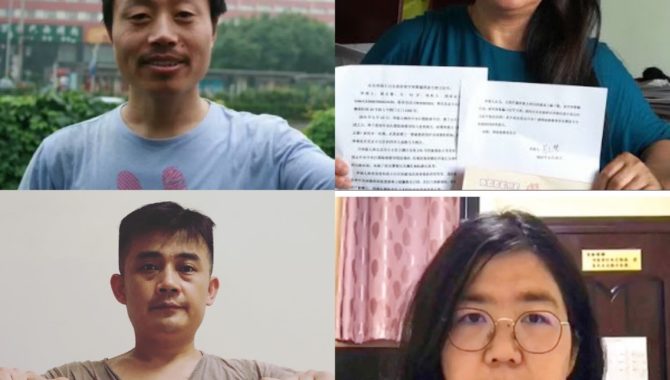 Citizen journalist Zhang Zhan is to face trial on the charge of “picking quarrels & provoking trouble” at the Shanghai Pudong New District Court on December 28, 2020. Authorities detained Ms. Zhang, a Shanghai-based outspoken online commentator, in May after she had traveled to report on the COVID-19 outbreak in the locked down city of Wuhan in February. After her detention, police took Ms. Zhang back to Shanghai, where she has since been held in the Pudong New District Detention Center. She went on a hunger strike at the facility “in protest of her persecution,” as she told her lawyer. Guards inserted a feeding tube to force feed her despite her protest. This is a case of arbitrary detention as authorities are retaliating against Ms. Zhang for exercising her freedom of the press and expression. In 2019, she spoke out in support of Hong Kong protesters, which landed her in criminal detention for two months, during which, she was reportedly forced to undergo psychiatric tests.

In another blow to independent journalism in China, police detained photojournalist Du Bin, a former New York Times freelance photographer, on suspicion of “picking quarrels & provoking trouble” in Beijing on December 16, 2020. According to his sister, who got a phone call from police, Mr. Du’s detention was said to “have something to do with his online speech.” Mr. Du, 48, is being held at the Daxing District Detention Center in Beijing. Du is known for his investigative documentary films on the down-trodden and disadvantaged social groups in China. In 2011, authorities rejected his application for a permit to work for the Times, so he had quit his freelance work there. He has since worked as an independent film maker. Mr. Du was detained in 2013 after he made a documentary about  a women’s forced labor camp in China and published a book, “Tiananmen Massacre,” about the 1989 pro-democracy protests in Beijing.

In apparent reprisal against human rights monitoring and reporting, police in China criminally detained rights activist, Ou Biaofeng, and placed him under “residential surveillance in a [police] designated location,” a notorious form of state-enforced disappearance, on December 18, 2020. Mr. Ou, who reported on rights abuses and mobilized action on social media, @oubiaofeng, was earlier placed under a 15-day administrative detention by police from the Lusong District Branch of Zhouzhou City Public Security Bureau on December 3, after he disclosed online information about the psychiatric detention of the “ink girl,” who defaced Xi Jinping’s poster by throwing ink on it. Police have blocked Mr. Ou’s lawyer from meeting with him. Police raided his residence in Ningxiang, Hunan, on the 18th, the day before he was expected to be released from administrative detention. Police told his wife that Ou had been detained on suspicion of “subversion against state power,” without informing her of his exact location. Police warned her not to disclose this news or accept any foreign media interviews.

Authorities put on trial Ge Zhihui, a human rights defender with disabilities, on December 15, 2020. Ms. Ge is an advocate for social and economic rights, who had been disabled by a demolition team while resisting the forced eviction of her family from their home. At her December 15 trial at the Beijing Fengtai District Court, she faced the charge of “picking quarrels & provoking trouble.” The prosecution’s case against her included the claims that Ms. Ge had showed support for persecuted human rights defender Cao Shunli, protested against officials who were interfering in a village election, and posted critical comments online. Except for her lawyer, nobody was allowed into the courtroom, not even her family members. The court did not announce a verdict. Police detained Ms. Ge in July 2019 and she has since languished at the Fengtai District Detention Facility. China ratified the international Convention on the Rights of Persons with Disabilities in 2008, The UN’s disability rights and social, economic and cultural rights treaty bodies are both currently conducting reviews of China’s implementation of the treaties.