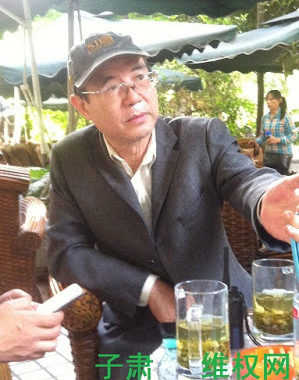 Zi Su (子肃), a retired professor who formerly taught at a Chinese Communist Party School, was detained in his hometown of Chengdu, Sichuan Province in April 2017 just hours after he released an open letter arguing that President Xi Jinping was unsuitable to serve as the leader of the Chinese Communist Party (CCP). In the letter, Prof. Zi called for democratic elections at the 19th Party Congress that October to replace Xi, and suggested a more progressive leader instead, after derisively noting Xi’s suppression of universal values. At least six other people across China were confirmed to have been detained for expressing support online for Zi’s proposal.

After police criminally detained Zi in May 2017, his family, including his sister (also a Party member) and defense lawyer, Ran Tong (冉彤), sent a letter in June 2017 to the Sichuan Commission for Discipline Inspection of the CCP, decrying the abuse of power in detaining Zi in violation of his right to freedom of expression. A week later, Zi was formally arrested on suspicion of “inciting subversion of state power” by the National Security Bureau in Chengdu. However, authorities indicted Zi on the more serious charge of “subversion of state power” in December 2017. The case indictment accused Zi of “attacking” the socialist system and trying to “overthrow” the state and, specifically, Xi Jinping, the “core leader.” On June 26, 2018, a pre-trial hearing in the case was held at the Chengdu City Intermediate People’s Court, and Zi denied that he had committed any crimes.

According to information CHRD received from a trusted source, authorities put Zi Su on trial on December 7, 2018 and coerced Zi into accepting a government-appointed lawyer and firing his independent lawyer (Ran Tong). Zi was told he could face up to ten years in prison if he didn’t fire his lawyer, and that if he accepted the government’s lawyer, he could receive a sentence of around 3-5 years. The court did not pronounce a verdict at the end of the trial, which Zi’s sister was allowed to attend. On April 15, 2019, the Chengdu court convicted Zi of “subversion” and sentenced him to four years in prison.

Born on November 23, 1955, Zi Su graduated from the Politics Department of Yunnan University in 1983 before teaching economics at the CCP School of the Yunnan Provincial Party Committee. As a Party School instructor, Zi grew disenchanted after observing corruption within the institution and the broader Party apparatus, and he began to share his ideas online about constitutional democracy, individual freedoms, and human rights. Zi also gave interviews with foreign media in which he disparaged the CCP’s political power, leading to summons for interrogation and threats from national security officers.

Zi retired in 2014 and returned to live in Chengdu in 2015. By then a CCP member for over three decades, Zi turned to social media and continued to criticize the Party and government while speaking out for democracy and rule of law in China. Prior to his current detention, Zi had also expressed support for the four men detained in Chengdu for producing a wine label that commemorated June Fourth. In connection with that advocacy, police seized Zi on October 25, 2016, and detained him on suspicion of “inciting subversion,” releasing him on “bail pending further investigation” a month later.

“Involving the proposal issued on the direct democratic election of the party general secretary, a retired teacher of the Yunnan Provincial Party School was taken away by officers of the Chengdu National Security Bureau,” 发表党内民主直选总书记建议云南省委党校退休教师子肃被成都国家安全局带走(Chinese), April 29, 2017, Human Rights Campaign for China