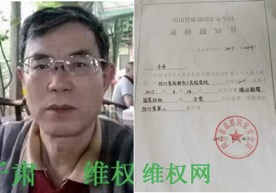 In the run-up to the Chinese Communist Party (CCP)’s 19th Congress, which opens on October 18, police across China have detained activists and tightened control over political expression online. As of October 16, CHRD has documented 14 criminal detentions and two cases of enforced disappearance. Many others have reportedly been put under administrative detention or soft detention at home, forced to “travel” with police escort, visited by police, or warned not to post sensitive messages in social media.

Most of the 14 under criminal detention face the charge of “picking quarrels and provoking trouble,” which has been widely applied by police as a pretext for incarcerating government critics, including posting comments or sharing information online that authorities deem threatening to “political stability.” Police have increasingly used the charge against civil society activism since the Supreme People’s Court issued a relevant interpretation in 2013 which stipulated that the Internet is a “public space” that can be “disrupted” by speech.

Below are the 14 confirmed cases of criminal detention:

Several Chinese netizens and activists, in violation of their free expression rights, have been detained for sharing information and opinions about the corruption allegations made by Chinese businessman Guo Wengui against CCP officials. The allegations against top Party leaders have galvanized world attention as the government has geared up for 19th CCP Congress. Below are the cases that CHRD has documented:

Sichuan police arrested a retired CCP School professor in June, after he released an open letter in April in which he called for democratic elections at the 19th Party Congress. Prof. Zi Su (子肃), 61, was formally arrested in Chengdu on suspicion of “inciting subversion of state power” on June 14. Zi had released his open letter on WeChat critical of Chinese President Xi Jinping on April 28, pointing out that Xi was unsuitable to continue to serve as head of the CCP and suggesting a replacement be elected. (See below for CHRD’s translation of Zi’s letter.)

Police had previously seized Zi on October 25, 2016, criminally detaining him for two days on suspicion of “inciting subversion.” Zi was released on “bail pending further investigation” on November 25. Chengdu national security officers took him away on April 29, 2017, the day after his open letter was released. Zi’s family was informed on May 11 that police had again put him under criminal detention. Zi is being held at Chengdu No. 2 Detention Center, and his lawyer has not been able to meet him. Zi Su’s family, including his sister (also a Party member), and defense lawyer sent a letter in June to the Sichuan Commission for Discipline Inspection of the CCP, decrying police abuse of power in detaining Zi in violation of his right to freedom of expression.

At least six other individuals across China are confirmed to have been detained for expressing support for Zi’s proposal online. All but one has been released:

Zi Su, a Chengdu native, taught economics at the Yunnan Provincial Chinese Communist Party School. A CCP member for 30 years, Zi turned to social media and often criticized the CCP and advocated for democracy and rule of law in China. He retired in 2014 and moved back to Chengdu in 2015. Prof. Zi continued to speak up for human rights and, prior to being taken into custody in 2016, had expressed support to the four men detained in Chengdu for producing a wine label with images commemorating June Fourth.

“Proposal for Democratic Direct Elections at the 19th National Congress and Nomination of Mr. Hu Deping as New General Secretary of the Chinese Communist Party”

The Chinese Communist Party is at a turning point in history, and the question is: Will it follow the historical trend towards democratic constitutionalism, or instead go down dictatorship’s timeworn road to collapse?

Mr. Xi Jinping has been in office for five years since being elected general secretary of the Chinese Communist Party at the 18th Party Congress in 2012. In judging his overall record, I think that Mr. Xi Jinping has served with some distinction. His main achievement has been to confront the corruption that festered during the previous administration of Hu Jintao. He has punished several corrupt officials. However, Xi’s crucial mistake has been to imitate Mao Zedong by creating a personality cult around himself and focusing on concentrating his power. This has been manifested by Xi heading up more than a dozen groups and committees, which goes against the democratic constitutional orientation of reforms to the political system.

Xi also has launched an unbridled attack on human rights defenders and democracy activists, while increasingly suppressing free speech online. His anti-corruption drive has been conducted under a one-party dictatorship, with Xi making substantial use of the Central Commission for Discipline Inspection to investigate corruption cases of Party and government officials. However, the campaign has been executed selectively, and even without transparency about the standards of criteria used [to target officials]. Xi’s biggest mistake has been to institute the “Seven Taboos,” and comprehensively restoring the ideology of the Maoist era. Such a policy was fervently opposed by Deng Xiaoping, Hu Yaobang, Zhao Ziyang, and other past Party leaders who advocated policies of reform and opening.

In view of this, many people inside and outside the CCP believe that Xi Jinping is unsuitable to continue in the role of General Secretary of the Central Committee. I propose launching a direct election for the upcoming 19th National Congress of the CCP [in the fall of 2017]. I personally suggest that Mr. Hu Deping, the son of former General Secretary Hu Yaobang, assume the post of general secretary. Since Hu Deping’s political philosophy leans toward democratic constitutional reform, it provides the Party and the country an opportunity to reverse the course of Maoist-era restoration that is occurring at this historical juncture.

For the future of both the CCP and China, I think it is the responsibility and duty of every Party member and Chinese citizen to select a CCP and national leader who can conform to the historical trend toward democratic constitutionalism. I invite those inside and outside the Party who agree with my opinion to sign this proposal.