The crackdown on peaceful assembly and free expression that has gone on for months has taken an even more disturbing turn with the criminal detention of Beijing professor and activist Xu Zhiyong (许志永), and the subsequent beating of his lawyer, Liu Weiguo (刘卫国), who has been seized by police. Taken into custody on July 16, Xu has been charged with “gathering a crowd to disrupt social order.” Police also searched Xu’s residence and took away three computers, a cell phone, and other personal belongings. On July 18, police prevented lawyer Liu from seeing Xu at Beijing No. 3 Detention Center. Officers then took away Liu, who is being held at the time of writing at the Daxing Public Security Bureau’s Sun Village Police Station, where police have reportedly beaten him. Officers also took into custody several of Xu’s supporters who came to the detention center to leave money for him. Heavily pressured by authorities to drop Xu’s case, Liu has said that he will make public any efforts to block him from doing so.

The detention of Xu makes clearer that authorities have been targeting activists involved in—or inspired by—the “New Citizens’ Movement,” a loose grouping of human rights defenders who for the past couple years have advocated for democratic and rule-of-law reforms, constitutionalism, human rights, and social justice. The “movement” has grown out of the “Open Constitution Initiative” (Gongmeng, 公盟), a pro-democracy NGO founded by Xu that the government shut down in 2009. (See CHRD’s statement). 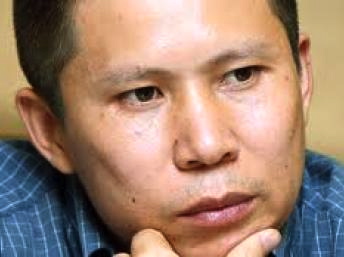 Professor and activist Xu Zhiyong has been criminally detained for “gathering a crowd to disrupt social order.”

In other developments with the crackdown, activist Song Ze (宋泽), a close associate of Xu Zhiyong and others who have been detained, is reportedly being held at Beijing No. 3 Detention Center. Originally from Hubei Province, Song had gone missing in the capital on July 12. Also on July 12, two other Beijing activists, Li Gang (李刚) and Li Huanjun (李焕君), were criminally detained on charges of “gathering a crowd to disrupt order of a public place” for activism linked to the New Citizens’ Movement. Police searched and confiscated several of Li Gang’s possessions, including computers, books, and items emblazoned with the Chinese characters for “Citizen” (公民), which has become the adopted logo by some activists associated with the movement. Li Huanjun, a kindergarten teacher-turned-activist, has faced harassment from authorities for seeking justice over the forced demolition of her home, and has become involved in calling for top Chinese officials to disclose their personal wealth. Li Gang is being detained at Beijing No. 3 Detention Center, while Li Huanjun is at Beijing No. 1 Detention Center.

Among the five activists seized in Hubei Province on June 25, Chen Jianxiong (陈剑雄) and Li Yinli (李银莉) were released on “bail awaiting trial” on July 13, and are facing charges of “inciting subversion of state power.” The three other detainees in Hubei have been arrested and remain in police custody; Huang Wenxun (黄文勋) and Yuan Xiaohua (袁小华) are facing charges of “inciting subversion,” while Yuan Fengchu (袁奉初, aka Yuan Bing，袁兵) has been arrested on suspicion of “subversion.” All five activists were detained in Chibi City while on an “advocacy trip” that was intended to encourage citizen activism and spread ideas of democracy and rule of law.[1]

To date, 25 individuals in Beijing and the provinces of Guangdong, Jiangxi, and Hubei—including activists, lawyers, and other citizens—have been confirmed criminally detained since February for publicly appealing for an end to official corruption and for promoting other politically “sensitive” goals. Sixteen of these individuals have been formally arrested.

Go to CHRD’s website to view case details on those detained in the ongoing crackdown on peaceful assembly and free expression as well as a gallery of images and background information on the detainees.

A court in Qinghai Province has reportedly sentenced a Tibetan monk to 10 years in prison on charges of “intentional homicide,” a harsh punishment reflecting the policy of criminalization that Chinese authorities have adopted towards self-immolations by Tibetans. Handed down in Xining City on July 12, Tsultrim Kalsang’s sentence is likely related to a self-immolation protest carried out by two Tibetans in June 2012, according to sources for the Tibetan Centre for Human Rights and Democracy. Armed police initially seized Tsultrim Kalsang in September 2012 from his monastery in Chenduo (Tibetan: Tridu) County in Yushu (Jyekundo) Tibetan Autonomous Prefecture in Qinghai. About a month after he was detained, he was briefly returned to his monastic residence due to failing health, but he was then summoned twice for questioning in Xining and held for long periods of interrogation. In February 2012, Tsultrim Kalsang was detained after taking part in a non-violent protest in Chenduo calling for Tibetan freedom and the return of the Dalai Lama to Tibet. Also, following the protests that rocked Tibet in March 2008, police held Tsultrim Kalsang in custody for about six months.[2]

Beijing activist Hu Jia (胡佳), who requires regular treatments for cirrhosis of the liver, has been under tightened restrictions for the past three weeks, with national security officers delaying him from going to a hospital for his exams and to get medicine. On July 16, Hu was set to go to Youanmen Hospital when officers prevented him for two hours from leaving his residence, where he has often been under “soft detention.” He was eventually able to go to the hospital, but only under tight police escort. Four days earlier, more than 10 officers had harassed Hu and blocked him from going to the hospital for medication, leading the activist to produce a knife to defend himself. From June 28, officers reportedly kept Hu confined to his home for 10 days, though they did not provide any reason in limiting his movements.[3]

Authorities in Henan Province have blocked a lawyer who has provided pro bono services for rights defense cases from finding employment at law firms, according to a CHRD source. In early June, the Zhengzhou Bureau of Justice reportedly passed down a verbal order to government bodies to pressure the firm where lawyer Ji Laisong (姬来松) had been working to fire him. Within weeks, two other law firms in Zhengzhou successively accepted his application to transfer, but the offers were rescinded under pressure from the justice bureau. Ji remains unemployed after contacting six more law firms. The sole reason given by officials in blocking Ji from being employed is that he has taken part in “civic activities.” In the past, authorities are known to have used other means, such as outright intimidation and delaying of annual license renewals, to harass human rights lawyers.

Ji Laisong has called for reform of the Re-education through Labor system and review of the “tomb-flattening” policy in Henan, where authorities have converted graveyards into farmland, and has defended a case of involuntary psychiatric commitment.

On July 18, more than 20 officials from the Beijing Bureau of Civil Affairs, accompanied by policemen, searched the office of the Transition Institute on Social Economic Research in Beijing, took away the group’s publications, and produced an official document ordering the group to “abolish ‘Transition Institute’.” Located in the capital’s Haidian District, the Transition Institute belongs to another group that is registered as a commercial firm due to government restrictions for granting independent groups legal status as non-governmental organizations. The Transition Institute works closely with the banned “Open Constitution Initiative” (Gongmeng) and has been active in China’s civil society campaigns for years, particularly on issues involving local elections, land rights, migrant labor, tax reform, and democratic transition. The group, especially its director Guo Yushan (郭玉闪), who has often been put under soft detention, played a pivotal role in the “Free Chen Guangcheng” campaign.[4]

CHRD has released partial data on human rights defenders (HRDs) who have been detained or subjected to torture and other forms of mistreatment since January 1, 2012. Compiling information through June 30, 2013, the data include records on approximately 150 new cases since March 1, including individuals seized in the ongoing crackdown against peaceful assembly and free expression (see above). The data is based on reports by human rights organizations working within China. The entire list of data, which is maintained on a regular basis, has information on more than 740 HRDs.

On July 1, CHRD sent a letter alleging arbitrary detention and torture on behalf of Xing Shiku (邢世库) of Heilongjiang Province, a petitioner who has been forcibly held for over six years in a psychiatric hospital in Harbin City. Xing was seized in early 2007 in Beijing and taken back to Harbin in retaliation for filing complaints to government authorities about corruption and violation of labor rights. In an interview, Xing said he has been tied up in chains, and that hospital staff have struck his head with electric pricks. In addition, he has suffered problems in his legs and other illnesses due to the extended detention and abuses.[5]

Last fall, CHRD sent an urgent appeal to the UN about seven other petitioners who, like Xing, have been involuntary committed. In August 2012, CHRD released a report that broadly analyzed psychiatric commitment in China, and submitted it to the UN Committee on the Rights of Persons with Disabilities for a review of the country’s compliance with the Convention on the Rights of Persons with Disabilities.

Go to CHRD’s website to view case details on those detained in the ongoing crackdown on peaceful assembly and free expression as well as a gallery of images and background information on the detainees.

[3] “Hu Jia Placed Under Soft Detention for Many Days, Blocked From Gong to Hospital for Examination” （胡佳被软禁多日，例行到医院检查受阻）， July 16， 2013， WQW