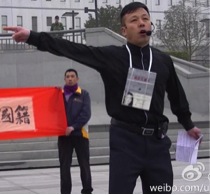 Beijing police seized Yuan Dong  along with three fellow activists, Ma Xinli (马新利), Zhang Baocheng (张宝成) and Hou Xin (侯欣) in March 2013 after they held a demonstration in Beijing’s Xidan district calling on officials to disclose their wealth. The protest was part of an anti-corruption campaign that began in late 2012, spearheaded by the New Citizens’ Movement—a loose network of activists promoting social justice and legal reforms. Originally detained on charges of “unlawful assembly,” Yuan was tried and convicted in January 2014 of “gathering a crowd to disrupt public order.” Born in Henan in 1968, Yuan had been working as a stockbroker since 2007.