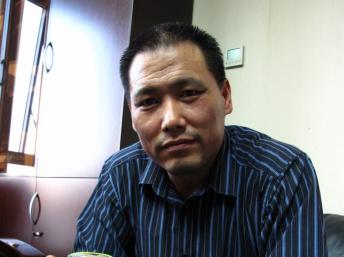 (The Network of Chinese Human Rights Defenders – June 13, 2014) – Prominent human rights lawyer Pu Zhiqiang (浦志强) has been formally arrested after more than a month in detention, charged on June 13 with “creating a disturbance” and “illegally obtaining personal information.” A notice issued by the Beijing Municipal Public Security Bureau said that “police are conducting further investigation of other criminal facts concerning Pu Zhiqiang,” indicating that more charges may be made against him. CHRD urges the Chinese government to release Pu Zhiqiang and others who have been detained for peacefully exercising their rights to free expression and assembly, including dozens in custody due to the crackdown around this year’s June Fourth anniversary.

“The arrest of Pu Zhiqiang shows the escalation of Xi Jinping administration’s assault on dissent, especially against highly influential figures in civil society,” said Renee Xia, CHRD’s international director. “Pu has become a major symbol of the momentum for political and legal reform inside China, making admirable use of his wisdom, passion, and eloquence along with his legal professionalism. Authorities want to alienate him from the population, marginalize his work, and silence his voice—just as they have done to others who challenge the government.”

The formal arrest order for the 49-year-old Pu comes days after authorities rejected an application for him to be released on medical bail, claiming that it would “pose a danger to society,” as reported by Rights Defense Network. When Pu’s arrest was approved, the legal limit for holding him under criminal detention without either arresting or releasing him—37 days—was set to expire. If convicted of “creating a disturbance,” Pu could be sentenced to more than five years or up to 10 years in prison, according to China’s Criminal Law (Article 293). For “illegally obtaining personal information,” he could be sentenced to up to three years (Article 253(1)).

In addition, lawyer Qu Zhenhong (屈振红), Pu’s niece, has been formally arrested, CHRD has learned from sources inside China. Criminally detained in Beijing on May 15, Qu had served on her uncle’s defense team. The reason for Qu’s arrest has not been confirmed, but some activists speculate that she was seized for assisting journalists in “illegally obtaining personal information” about Zhou Bin (周滨), the son of the former national security chief Zhou Yongkang (周永康), who has been the subject of a corruption investigation. Lawyer Pu has also been charged with the same crime, perhaps due to an open letter he sent to authorities in February requesting an investigation of Zhou Yongkang for violations of “rule of law” and the Chinese constitution. Zhou is also a retired member of the powerful Politburo of the CCP Standing Committee.

With the arrests of Pu and Qu, CHRD has confirmed four arrests from suppression tied to this year’s Tiananmen anniversary. In addition, 51 others are known to have been criminally detained (see CHRD’s ongoing updates).

A prolific writer and an outspoken critic of government policies, Pu Zhiqiang participated in the 1989 student demonstrations and has assisted the group Tiananmen Mothers in seeking accountability for their loved ones killed in the massacre. Due to his activism, he was not assigned a job when he graduated from China University of Politics and Law with a Masters in law in 1991. Having practiced law since 1997, Pu has defended many high-profile human rights cases. Among those he has represented are artist and activist Ai Weiwei (艾未未), activist and environmentalist Tan Zuoren (谭作人), and Tang Hui (唐慧), who was sent to Re-education through Labor after seeking justice for her daughter, who was raped at the age of 11.

Every year around the June Fourth anniversary, Pu would return to Tiananmen Square to pay respects to those who died in the violent crackdown, but police began putting him under house arrest around that time several years ago.

“I have a ‘June Fourth complex’…25 years have passed, and I must pay a price,” said Pu Zhiqiang to his lawyer at the detention center. “It’s an absolute obligation, [I have] no complaint or regret. I will not change my mind just because of this incident…I hold fast that I have the right to express these views, which has nothing to do with ‘creating disturbance.’”

Currently held at Beijing No. 1 Detention Center, Pu was taken from his home on May 5 and criminally detained the next day on a charge of “creating a disturbance.” Soon after being detained, Pu told his attorneys that he was not receiving proper treatment for illnesses, particularly diabetes, for which he needs daily medication. Due to his physical condition, Pu’s lawyer, Zhang Sizhi (张思之), twice sought his release on medical grounds, with the second application denied on June 9 on the grounds that Pu would “pose a danger to society” if released. When Zhang recently visited his client, Pu said he has now been given some treatment for diabetes, including insulin, but that his legs are swollen, a typical sign that a diabetic patient is not being properly treated. He also told Zhang that he has been subjected to interrogation for 10 hours a day, an exhausting situation that is likely only to worsen his health.

“Pu’s health condition greatly concerns us,” says Renee Xia. “He has serious diabetic conditions which require close monitoring and regular medication, and for which he was hospitalized a few years ago. China’s detention facilities are notorious for providing no or minimal, low-quality care, and persecution of detained activists by depriving medical care is a well-documented problem. We have seen this end tragically, like with Cao Shunli, who died in March after not getting necessary medical care. Authorities will seemingly stop at nothing to try and break down political detainees.”

Pu is the only individual still in custody among those seized after taking part in a private event on May 3 commemorating June Fourth. Four others in attendance were released on June 5. In addition, two journalists detained with ties to Pu have also been let go on bail. Though no longer detained, all of these individuals still face restrictions, such as not being allowed to leave Beijing, write articles, or conduct other activities for up to a year without police permission (see report).