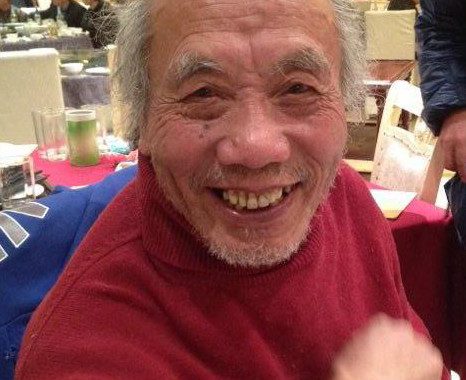 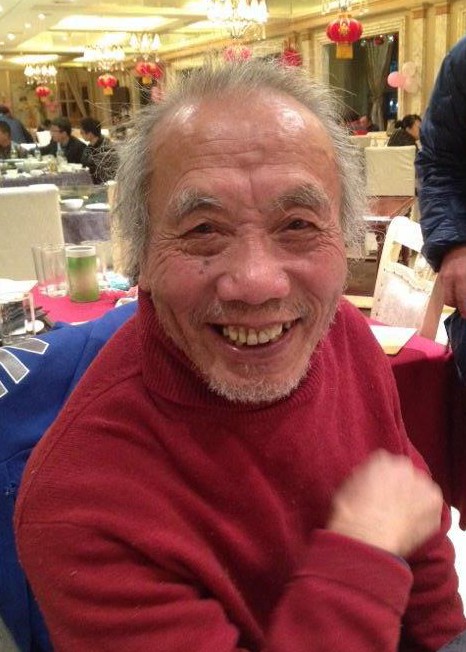 Dissident writer Tie Liu (铁流), pictured after his trial and release on February 25, was issued a 30-month sentence for “illegal business activity” suspended for two years, in a case of government reprisal that violates his free expression rights.

A court in Sichuan put on trial the writer Tie Liu (铁流), an outspoken government critic, on February 25, convicting him of “illegal business activity” but issuing him a suspended sentence in a case fraught with rights abuses. The trial at the Qingyang District People’s Court in Chengdu lasted for about one hour, and the court sentenced Liu to two-and-a-half years in prison, suspended for four years, and issued him a fine of 30,000 RMB (approx. $4,900). Tie’s caretaker, Huang Jing (黄静), was tried as an accomplice in the same case and sentenced to one year in prison, suspended for two years, and fined 5,000 RMB (more than $800). Both were let go after the trial. According to Chinese law, they will only serve prison time based on the court’s decision if they are found to commit further crimes during the periods of their suspended sentences.

A plea deal was apparently struck before the proceedings that led to the suspended sentences. Tie and Huang both said they “admitted guilt” when the presiding judge asked in court, and they each requested reduced punishments. While Tie Liu’s family welcomed his release, the case has been seriously marred by human rights abuses and political interference in the judicial process. It presents a window into the workings of the Chinese government’s manipulation of the country’s criminal justice system to enforce censorship and punish free expression.

The case against Tie is clearly the government’s way to retaliate against the writer, whose real name is Huang Zerong (黄泽荣), for exercising his basic rights. His conviction for “illegal business activity” centered on two manuscripts that Tie self-published, according to prosecutorial evidence produced in court. One was a journal called “Small Traces of the Past” (往事微痕), which consists of memoirs by those purged by the Chinese Communist Party for criticizing the party during the CCP’s “anti-rightist” purge in the late 1950s. At that time, hundreds of thousands of intellectuals were jailed, tortured, or sent to remote rural areas and forced to perform hard labor. The other publication contained reprinted reading materials. The court cited financial transaction records of about 860,000 RMB (more than $140,000) as evidence of “illegal business activity,” which, Tie pointed out during the trial, was mostly debt paid back to him and donations from readers, not commercial charges for purchasing the publications. At trial, Tie also said that the journal and reprinted materials were not for widespread public consumption.

“Illegal business activity” has been used as a criminal charge against other vocal critics of the party and government policies. A prominent case was that of Guo Feixiong (郭飞雄), who was sentenced in 2006 to five years in prison for the offense after publishing a book criticizing government corruption. Authorities appeared to escalate its use in 2014, and not only to target freedom of expression but also free association, in an alarming move to stifle NGO work. Blogger Dong Rubin (董如彬) and documentary film producer Shen Yongping (沈勇平) were sent to prison after being convicted of the crime last year. Those affiliated with NGOs who were detained for “illegal business activity” in 2014 include: Chang Boyang (常伯阳), a board director of the Zhengzhou Yirenping, which promotes social justice and public health; Guo Yushan (郭玉闪), co-founder of the think tank Transition Institute on Social Economic Research; Transition Institute’s administrative director, He Zhengjun (何正军); and Liu Jianshu (柳建树), manager of the rural libraries run by the Liren Group. Guo and He were arrested on the charge in January and remain in detention, while Chang and Liu have been released.

Tie and Huang’s case, from initial detention to trial, has been deeply flawed with violations of the law and legal procedures. Tie has been held in police custody despite a Public Security Ministry regulation that exempts individuals above the age of 70 from being held in detention facilities unless they are charged with a violent or gang-related crime, which he was not. Tie also was subjected to harsh interrogations and mistreatment in the initial months of his detention, including deprivation of medical treatment. Despite Tie’s poor health, authorities refused his lawyer’s applications for release on medical bail. In September, he was taken to the emergency unit of the Red Cross Hospital in Beijing when he fainting and suffered from incontinence after grueling overnight interrogations at Beijing No. 1 Detention Center.

Beijing police first criminally detained Tie and Huang on suspicion of “creating a disturbance,” apparently due to an article he wrote criticizing the Communist Party’s propaganda chief. Beijing police arrested them both a month later with the additional charge of “illegal business activity.” Although the Chengdu Public Security Bureau recommended indictment on both charges, the Chengdu procuratorate later dropped the “creating a disturbance” charge and indicted them only for “illegal business activity.” The change may have been part of a plea bargain in exchange for Tie and Huang to “admit guilt.”

Knowing the harsh treatment that he has suffered, and with the prospect of Tie serving years in prison in poor health and at his advanced age, Tie’s family asked supporters for understanding of the deal made with authorities: “We only wanted Tie Liu to be freed, it doesn’t matter whether he admitted guilt,” his wife reportedly told those who came to show support outside the courtroom. Only two family members were allowed into the court. Tie Liu said in his closing statement at the trial, “I won’t do these things anymore, I’m old, I don’t have the energy. I have high blood pressure, blood clots in the brain, heart disease, and prostate illness. If the law forgives me, I will keep my wife and children’s company and live a peaceful life.”

It is unclear what pressure authorities may have exerted on Tie Liu and his family. Indications of a shift came when the family hired a different lawyer for him after the case moved from police investigation to prosecution, and quietly dropped the human rights lawyer Liu Xiaoyuan (刘晓原), known for his unflappable defense of high-profile activists and dissidents, who was initially authorized by the family to represent Tie. Liu Xiaoyuan reportedly said that he understands the family’s concern that perhaps a bargain made with authorities might fall apart if he continued to be involved in the case. (The court appointed a lawyer for Huang.) The court put Tie and Huang on “trial with simplified procedures,” which is another indication that both had agreed to plead “guilty” before the trial. Lawyer Liu expressed surprise on his Twitter account when he heard that Tie admitted guilt in court: “When I visited him at the detention center in Chengdu last November, he insisted on his innocence. Why has such a drastic shift taken place?”

Tie and Huang were criminally detained in Beijing, where they live, but they were sent to Chengdu in Sichuan Province on November 24, where they since had been held at Chengdu City Detention Center. The relocation of this case was perhaps due to Tie’s household registration, which may have remained in Sichuan, though Huang was originally from Guizhou Province. No document was presented during court proceedings to show authorization by the Supreme People’s Court, as required by Chinese law, for a case to be handled outside the location where the accused lived and the suspected “criminal acts” were committed. Without showing such an order from the highest court, the court in Chengdu has failed to establish its jurisdiction over the case, said lawyer Liu Xiaoyuan.

Though Tie and Huang are able to go home, authorities have arbitrarily deprived their liberty for more than five months—they were seized on September 13 last year—on the basis of their exercise of the right to freedom of expression and the press. Those officials responsible for arbitrarily depriving their liberty should be held criminally accountable, and the government should provide the necessary remedies, including exonerating them by removing the verdicts and charges against them and granting them compensation for the harm they suffered during their arbitrary detention.

A veteran journalist with Chengdu Daily, Tie Liu was the victim of the “anti-rightist” political purge in 1957 and was held in labor camps from 1958 to 1980. After his release, he continued writing, including doing a column for the overseas website Boxun, and drafted open letters denouncing media censorship. Both his wife and son have been barred from leaving the country ever since Tie was detained.[1]