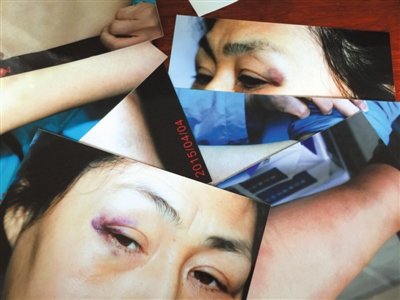 CHRD joins more than 300 lawyers in China in calling for an independent investigation into the alleged violence against lawyer Cui Hui (崔慧), and for the perpetrators to be held legally accountable. Judges and bailiffs at a Beijing courthouse attacked Cui on April 2. The physical assault on Cui, a 51-year-old female attorney at the Beijing Hengqing law firm, follows a pattern of increased violence against Chinese human rights attorneys while they conduct their work. One of the most outrageous incidents in the past year involved the torture of four rights lawyers in police custody in Heilongjiang Province in March 2014, which authorities still have not investigated.

Judges Yang Yu (杨宇) and Lai Xiulin (赖秀林), both male, assaulted Cui at the Tongzhou District People’s Court after she requested a long-overdue ruling on a contract dispute case. Cui said that the assault took place after she went to file a complaint with the procuratorate about the court’s unresponsiveness. According to Cui, Lai Xiulin punched her in the face, and when she fled downstairs, she encountered Yang Yu, who refused to help her and instead told two court bailiffs, who she could not identify, to beat her. The beating only ended when a female judge in the courthouse assisted Cui and promised to alert the head of the court. Cui was treated at Beijing Tongren Hospital after the incident. Doctors found injuries to her eye sockets and soft tissue damage to her face, back, neck, and limbs. She subsequently filed a report with the Liyuan Police Station as well as a complaint with the Tongzhou District People’s Procuratorate, the Tongzhou and the Beijing Lawyers Associations, and the discipline inspection office of the Tongzhou District People’s Court

According to other lawyers familiar with the case, under Chinese law, the Tongzhou District Public Security Bureau should have put the two judges who assaulted Cui under administrative detention. The lawyers said that the two should be detained while waiting for the evaluation by judicial authorities of medical reports on injuries that Cui sustained, before authorities decide whether to put them under criminal detention. But the Tongzhou police have taken no action against the two men. Meanwhile, police have not considered Cui’s request for an evaluation of the medical report. The delay only means that no criminal investigation can proceed and the suspects remain free.

The Tongzhou District People’s Court did not respond to Cui’s original complaint for 14 days. So far, the court has not asked about Cui’s injuries nor offered any apology. On April 13, the court issued a brief statement—after Cui went public with the incident—saying it would conduct an investigation. The Tongzhou court is not well-positioned to investigate behavior of its own personnel in a impartial manner. The court may also be attempting to preempt any investigation by the police or the procuratorate.

Lawyer Cui Hui (崔慧) was injured in an assault at the Tongzhou District People’s Court by judges and bailiffs on April 2. (Image: Beijing News)

In recent years, other incidents of violence against human rights lawyers have not been promptly and impartially investigated. Authorities in Heilongjiang Province never responded to lawsuits filed by four lawyers who were detained and tortured by police in March 2014 after they tried to visit clients held in an extralegal detention facility in Jiansanjiang City. In December 2013, plainclothes police and thugs in Jiangxi Province attacked defense lawyers for three detained activists outside the Yushui District People’s Court in Xinyu City before the start of the second day of the activists’ trial. Additionally, lawyers Cheng Hai (程海), Li Changqing (李长青), and Sui Muqing (隨牧青) have all reported acts of violence against them by police or unknown thugs while attending trials or visiting clients in detention in the past two years; they have also pointed out that police at the scenes of the assaults simply stood by and watched.

As CHRD noted in the latest annual report on the situation of human rights defenders, these acts of violence have occurred as criminal prosecution of rights lawyers in 2014 reached the highest level since such individuals emerged in China’s civil society in the early 2000s.

This fall, the UN Committee against Torture will review the Chinese government’s implementation of the Convention against Torture and Other Cruel, Inhuman or Degrading Treatment or Punishment. CHRD calls on Chinese authorities to take measures to properly investigate the numerous allegations of officially-sanctioned violence against human rights lawyers. China, as a state party to the treaty, has an obligation under Articles 12 and 13 of the Convention to promptly and impartially investigate allegations of torture and hold those found guilty legally accountable.[i]