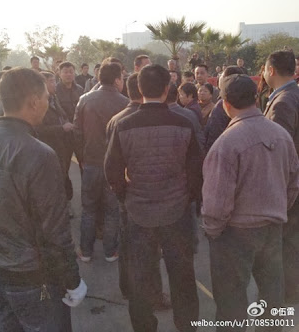 Rights Activist Arrested in Hunan for Freedom of Expression

Police seized rural activist Zhao Fengsheng (赵枫生) on November 28 in Hunan Province and detained him at Hengyang County Detention Center. The authorities put him under criminal detention on the same day on charges of “subversion of state power.”  Police also confiscated Zhao’s computer. His wife received a notification the following day of his status, citing Article 80 of China’s Criminal Procedural Law (concerning situations that permit the police to detain a suspect without prior approval). It is believed that his detention was related to drafting an open letter. Zhao had previously lived under tight surveillance and he was forced to leave Beijing in 2011 after he tried to organize a group of farmers and form a national union. If convicted as the main instigator of subversion, according to China’s Criminal Law, Zhao could face a sentence of life in prison or at least a ten-year term.[1]

Nine Tibetans have been sentenced in Diru (Ch: Biru), Nagchu (Ch: Naqu) Prefecture, Tibetan Autonomous Region (TAR) as it increasingly becomes the frontline in the clashes between locals and the Chinese Communist Party’s restrictive policies in Tibet (see previous CHRB). The names of only three of those sentenced are known, and all three have been convicted of maintaining contacts with the “Dalai clique” and “engaging in activities to split the nation.” Topden, a 30-year-old Tibetan writer, was arrested on October 28 and sentenced to five years. His sentence reportedly may be in connection to a poem he wrote that mentioned the recent crackdown in Diru. Layman Tenzin Rangdol, 32, was arrested on October 18, sparking protests the next day outside government offices, and was sentenced to five years on November 30. Kunchok Choephel, a 28-year-old monk, was arrested on November 18 and sentenced to six years.[2]

The long-delayed and suspended trial of Jiangxi activists Liu Ping (刘萍), Wei Zhongping (魏忠平), and Li Sihua (李思华) resumed on December 3 at Yushui District Court. The three defendants have been detained since April for their anti-corruption and other rights activities. Their first trial in October was adjourned after their lawyers resigned in protest over the violations of their clients’ legal rights (see previous CHRD statement). The resumed trial, however, has been marred by similar violations, as a number of key witnesses and supporters of the defendants were put under house arrest or restricted in their movements in advance of the trial. In addition, police harassed the defense lawyers at a guesthouse where they were staying in Xinyu City, and confiscated materials, including Li Sihua’s defense statement. On December 4, the second day of the trial, the scene outside the courthouse at times reportedly became chaotic, as a large number of plainclothes police officers and thugs attacked the lawyers and supporters, leading one lawyer to resign from the courtroom in protest over such blatant harassment. The trial of the three activists is among the first group of a likely impending series of trials of dozens of detained activists in the ongoing nationwide crackdown on peaceful assembly, association and expression.[3]

A large number of plainclothes officers and thugs harassed the lawyers and supporters of the three Jiangxi activists outside the courthouse on the second day of the resumed trial.

Trial of Anhui Activist Zhang Lin to Begin in Mid-December

The trial of the Anhui-based activist Zhang Lin, detained in July on charges of “gathering a crowd to disrupt order of a public place,” is set to begin on December 18 at Bengshan District People’s Court. Authorities seized Zhang in an apparent retaliation for protests in support of his 10-year-old daughter, Annie Zhang, who was blocked by authorities from attending school in Hefei City. On February 27, Annie was removed from Hefei Hupo Elementary School and detained before she and her father were under house arrest. In April, Zhang Lin along with several activists and lawyers tried to help Annie return to her school by staging rallies in front of government buildings, but with no success.[4] Police have since detained several other activists in connection to the same protests.

On December 3, 2013, two unidentified men physically assaulted defense lawyer Li Changqing (李长青) at the entrance to Jining Intermediate Court in Shandong Province. Li requested assistance from a policeman in patrol van but the officer refused and left the scene. He asked security guards at the courthouse to extract video images from surveillance cameras, but the guards refused to take any action citing that no staff was on duty. Li is representing his client Li Erfa (李尔法) in an administrative lawsuit against the Yutai County Government over alleged illegal eviction.[5]

In a separate incident, Cheng Hai (程海), who is representing detained human rights lawyer Ding Jiaxi (丁家喜), was beaten inside the Beijing No. 3 Detention Center while visiting his client on November 26. Cheng had Ding’s consent to take a photo of Ding, an action permitted by Criminal Procedure Law, but police intercepted and assaulted Cheng. Then a scuffle broke out when police officers forcibly took him away. Police held Cheng at the detention facility for five hours. Ding Jiaxi is being held for his involvement in New Citizens Movement’s anti-corruption campaign. He is one of several dozens of activists detained in the ongoing crackdown on peaceful assembly, association and expression.[6]

On November 8, with the assistance of Chinese rights activists who monitor the case closely, CHRD submitted further information to UN rights experts about the case of Xing Shiku, a petitioner who is held against his will for more than six years. The new information supports the allegations of human rights violations made on Mr. Xing’s behalf. The Chinese government, upon receiving inquiry from the experts, responded by denying the allegations. The new information serves as a reply to the government’s responses to the UN experts’ inquiry based on an allegation that CHRD submitted on July 1. Xing has been forcibly committed to a psychiatric hospital by authorities in Daowei District, Harbin, Heilongjiang Province, even though doctors at the facility acknowledged that Xing does not have any mental illness. Xing’s family has consistently requested his release, but to no avail.

[3] “Trial of Liu Ping and Others Resumes in Xinyu of Jiangxi As Witnesses Put Under House Arrest, Defense Statement Taken Away and Lawyers Harassed” (江西新余刘萍等人案开庭前证人被软禁辩护词被收走律师受骚扰),” December 2, 2013, WQW; “The Xinyu Three Notables’ Case Begins for the Second Time, Many Restricted as They Try to Attend” (“新余三君子案”二次开庭，多人因参与围观遭控制),” December 3, 2013, WQW; “Xinyu in a State of Emergency: On the Second Day of the Trial of Liu Ping and Others in Xinyu City of Jiangxi, Numerous Plainclothes Police Attacked Lawyers” (新余告急：江西新余刘萍等人案庭审第二天大量便衣攻击律师),” December 4, 2013, WQW.

[4] “Zhang Lin’s Trial to Begin on December 18, on Suspicion of “Gathering a Crowd to Disrupt Order of a Public Place” (张林涉嫌“聚众扰乱公共场所秩序罪”案将于本月18日开庭), December 2, 2013, WQW.