December 22, 2015       Comments Off on Verdict against Human Rights Lawyer Pu Zhiqiang A Travesty of Justice 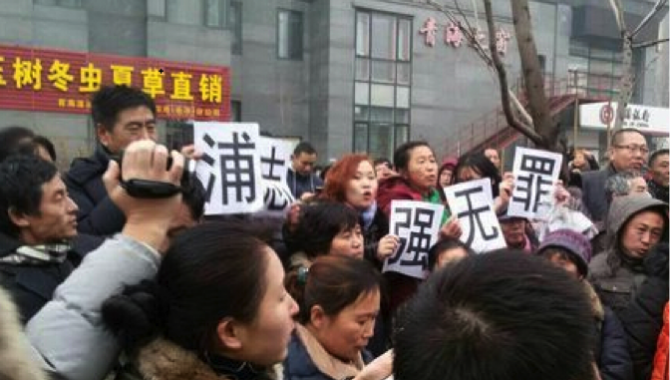 (Network of Chinese Human Rights Defenders—December 22, 2015) CHRD condemns the guilty verdict, with a suspended three-year sentence, handed down to prominent human rights lawyer Pu Zhiqiang (浦志强) by the Beijing No. 2 Intermediate People’s Court today. The ruling makes a mockery of the Chinese President Xi Jinping’s “rule of the country with law” and China’s criminal justice system. Pu Zhiqiang may walk home today, but he is not free. He has paid a heavy price for exercising his freedom of speech – he was detained for 19 months, his health has degenerated due to poor medical treatment, and, with this conviction, his career as a lawyer is over.

CHRD urges the international community to push for Pu Zhiqiang’s unconditional freedom and end China’s ongoing persecution of human rights lawyers. More than twenty lawyers have been put under secret detention since July 9 this year. Pu’s colleague, rights lawyer Xia Lin, has been detained for more than one year. CHRD urges the international community to pressure the Xi Jinping government to drop the charges against Pu and push for the immediate and unconditional release of all other detained or disappeared human rights lawyers.

We are seriously concerned about Mr. Pu’s health and freedom after today’s verdict. Exactly nine years ago today, on December 22, 2006, another human rights lawyer, Gao Zhisheng, was given a three-year sentence, with a five-year reprieve. But Mr. Gao has never been free, and even worse, he was subjected to solitary confinement at home, repeatedly beaten, his family collectively punished, and eventually taken back into prison and subjected to torture. Today, released from prison, Gao Zhisheng still lives under close surveillance and is barred from seeking medical treatment and joining his family abroad. 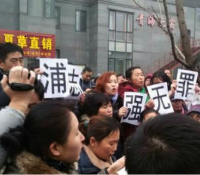 Supporters of convicted human rights lawyer Pu Zhiqiang (浦志强) chant and hold up “Pu Zhiqiang is Innocent” outside the court during his trial.

Today’s verdict against Pu Zhiqiang was unexpected, as Pu’s family was given a one-day notice, while Chinese law stipulates authorities should provide a notice at least 3 days in advance. Pu was put on trial last week, on December 14, on charges of “inciting ethnic hatred” and “picking quarrels and provoking troubles,” after he spent 19 months in pre-trial detention. The trial was closed to the public and marred by violence—as uniformed and plainclothes police shoved and roughly manhandled diplomats, foreign journalists, and Pu’s supporters. Police took away more than 20 supporters outside the courthouse, and have since put four of them under criminal detention on unknown charges. Authorities are holding activists Mr. Zhang Zhan (张占) from Hebei, Ms. Wang Su’e (王素娥) from Liaoning, Ms. Qu Hongxia (渠红霞) from Beijing, and Ms. Ran Chongbi (冉崇碧) from Guandong, at the Beijing Fengtai District Detention Center.

Police first took Pu into custody in May 2014 after he attended a private event memorializing victims of June Fourth. During his prolonged pre-trial detention, Pu was mistreated, including being deprived of medical treatment and contact with his family. (See CHRD’s statement before Pu Zhiqiang’s trial for more details).

The charges against the 50-year-old lawyer were based on seven weibo postings that authorities attributed to him, which criticized government policies, including in Xinjiang. The postings also included comments that mocked Chinese Communist Party (CCP) leaders, including one where Pu remarked that several senior CCP leaders ascended to their positions due to “luck and bloodlines” and by “pretending to be fools and being actual fools.” The persecution of Pu Zhiqiang signals that the Xi government will continue its zero-tolerance policy towards critical comments on the Internet about its repressive policies in the Xinjiang Uyghur Autonomous Region, and towards anyone, like Pu, who seeks justice for victims of 1989 Tiananmen massacre.

Pu Zhiqiang’s case is emblematic of the crackdown on online speech under Xi Jinping. Since a 2013 Supreme People’s Court interpretation expanded the definition of a “public place” to include cyberspace, police have been punishing Internet speech under the crime of “picking quarrels and provoking troubles.” In autumn 2014, authorities used the crime to detain without charge dozens of individuals who peacefully posted messages online in support of the Hong Kong Umbrella Protests.

Pu Zhiqiang was a student leader in the1989 prodemocracy protests. He rose to prominence after he undertook a number of high profile cases involving free speech and arbitrary detentions under the notorious Re-education Through Labor system. He won a landmark case that was credited for helping bring about an end to the labor camps and also took on a case that drew attention to shuanggui, an extralegal disciplinary system for Chinese Communist Party officials. Pu was one of the first signatories of “Charter 08,” a manifesto of political and legal reforms for advancing democracy and human rights in China.