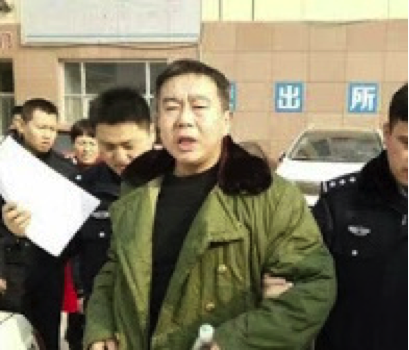 Human rights lawyer Shu Xiangxin (舒向新) was reportedly subjected to torture and other forms of ill-treatment in a detention center on January 4, in a case emblematic of the harsh reprisals and punishment that Chinese human rights lawyers face. The incident reflects the persistence of torture in China’s detention facilities. Torture continues despite the observations and suggestions put forth by the UN Committee against Torture (CAT) during its November 2015 review of China’s compliance with the Convention against Torture. China has been a party to the Convention since 1988.

Abruptly seized and formally arrested by police on January 2, Shu detailed his ordeal to his two lawyers who, after being denied access, eventually were permitted to visit him on January 4-5 at Jinan City No. 2 Detention Center in Shandong Province. During lawyer Cai Ying (蔡瑛)’s meeting with Shu on January 4, Shu described being subjected to torture and degrading treatment earlier that day. Shu told lawyer Cai that he was handcuffed, severely beaten, deprived of food and water, and forbidden from using the toilet. According to a signed statement by Shu, which the lawyer obtained, officer Zhang Zhongwei (张仲伟), the detention center’s head of “discipline management,” cuffed Shu to a staircase after Shu had refused to perform hard labor inside the detention center. (Such labor is against detention center regulations.) Officer Zhang verbally assaulted Shu and repeatedly punched the lawyer in view of other officers, none of whom intervened. Eventually, Shu saw a pool of his blood form on the floor before losing consciousness. Detention center officers left him handcuffed to the staircase for seven hours. During another meeting with Shu on January 5, lawyer Cai and lawyer Li Fangping (李方平) saw visible injuries on Shu’s face and wrists. Shu told his lawyers that he would “rather be dead” than endure the kind of torture that he was subjected to.[1]

Chinese authorities detained Shu Xiangxin on suspicion of “defamation.” In the past few years, government officials have intimidated and harassed Shu as he took on cases of farmers who had lost land in Guan County while also defending victims charged with “extortion” for seeking state compensation for abuses by officials.

The egregious assault of Shu underscores the lack of protections from abuses for detainees in police custody in China. Like many other cases, Shu’s case demonstrates the persistence of torture by police and highlights the conditions under which torture in detention thrives. CAT raised problems of such abuse and torture in China during its review in November, including issues noted below. In December, CAT issued strong recommendations (in its “Concluding Observations”) for overhauling the system that has failed to prevent torture and punish torturers in China.

Shu Xiangxin’s recent mistreatment illustrates that little has changed since the UN Committee against Torture made recommendations intended to urge the Chinese government to abide by its international treaty obligations.