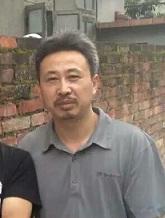 Police took activist Wang Mo into custody in October 2014 during the suppression of mainland supporters of the pro-democracy protests in Hong Kong. Authorities detained Wang after he and activists Xie Fengxia (谢丰夏) and Sun Liyong (孙立勇) held up a banner in a Guangzhou park calling for freedom and support for the Hong Kong protestors. Initially held on suspicion of “picking quarrels and provoking trouble,” Wang was arrested on the more serious “inciting subversion” charge a month later and held in Guangzhou No. 1 Detention Center. Authorities indicted Wang and Xie on May 18, 2015, and then tried them together. (Sun Liyong was released after 30 days in detention.)

Authorities accused Wang and Xie of being involved in pro-democracy Internet campaigns beginning in 2012, and using different online personas to post information about freedoms, human rights, June Fourth, and detained human rights defenders. The court verdict against them claimed Wang and Xie had been “influenced” by foreign ideas about freedoms, and that their conduct had been aimed at inciting the overthrow of the Chinese Communist Party. Their lawyers argued at trial that their activities were protected under the right to freedom of expression and peaceful assembly.

According to Wang’s older brother, the prison alerted the family in October 2016 that Wang is suffering from an edema in his left kidney, and cysts in his right kidney. Wang’s condition is believed to be serious, according to the brother, but prison authorities will not allow a family visit until the following month.

Wang was released in April 2019 after completing his sentence. After he returned home, police took him away and threatened him to not speak out or take part in certain activities, warning that he can be re-arrested during the subsequent three years of political deprivation that he must serve.

Wang, born on December 15, 1972, is a cyber activist and participant in the Guangdong “Southern Street Movement,” which has consisted of activists taking to the streets or other public spaces to conduct rights advocacy and express political ideas. Originally from Jiangsu Province, Wang has often been administratively detained by police, including three times in 2014.