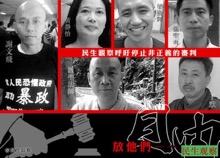 Prison sentences issued by Chinese courts to six human right defenders on April 8 are reminders of ongoing arbitrary detentions and relentless persecution of dissent in China under Xi Jinping’s rule. Courts in Guangdong and Hubei convicted the six activists of “inciting subversion of state power” and sentenced them to prison terms of between 18 months and four-and-a-half years. The convictions bring to 16 the total number of human rights defenders (HRDs) sentenced to prison who were first detained in two separate crackdowns in 2014. Two of the six recently sentenced activists were taken into custody around the 25-year anniversary of June Fourth, and the four others were detained for expressing support for Hong Kong’s pro-democracy movement.

The progression of these cases follow a now-familiar pattern of persecution of detained human rights defenders in China, namely restricted access to legal counsel, unreasonably prolonged detention before being brought before a judge, alleged torture and inhumane treatment, and the use of a serious “endangering national security” crime to persecute HRDs for exercising free speech and peaceful assembly.

With last week’s verdicts, 11 HRDs detained in the clampdown around the 2014 anniversary of the Tiananmen Massacre, and five seized after they took to the streets to express support for the Hong Kong protests, have been issued prison sentences. Among others still in custody from those two crackdowns, two activists still await verdicts after being tried in 2015, while three others have been indicted but not yet brought to a trial, and another has been formally arrested (but not indicted), according to CHRD’s records.

The two activists (below) sentenced by the Wuhan City Intermediate People’s Court on April 8 had both been detained on May 17, 2014, just before the June Fourth anniversary. They were tried nearly a year later, on April 21, 2015, and thus had to wait almost one more year for the court to finally issue its verdict.

The four men sentenced on April 8 by the Guangzhou Municipal Intermediate People’s Court have been held at Guangzhou No. 1 Detention Center:

Six rights defenders were sentenced on April 8, given punishments of 18 months to four-and-a-half years for “inciting subversion.”

Like other activists detained in these crackdowns, officials held the six individuals incommunicado after first taking them into custody. The activists were then detained for between nine and 13 months before facing trial. From the point of initial detention, each one was behind bars for between 13 and 23 months more before being sentenced last week.

All together, 16 HRDs detained in the 2014 crackdowns have now been sentenced. In addition to the six above, several others include:

In addition, two other activists were tried in 2015 after being detained in the suppression around the Hong Kong protests, but have yet to be sentenced:

The following five HRDs from the crackdowns still languish in excessively prolonged pre-trial detention. The first four have already been indicted.