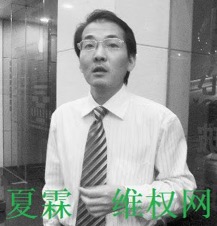 (Network of Chinese Human Rights Defenders—September 22, 2016) – CHRD denounces the Chinese government’s political persecution of human rights lawyer Xia Lin (夏霖) and urges authorities to release him immediately. The Beijing No. 2 Intermediate People’s Court convicted Xia on trumped-up charges of “fraud” on September 22 and handed down a 12-year prison sentence. The punishment against Xia Lin is the longest known sentence given to a Chinese human rights lawyer since Xi Jinping’s government began cracking down over three years ago on the country’s increasingly independent community of rights lawyers. Xia Lin will appeal his conviction and sentence, according to his attorney, Wang Zhenyu (王振宇).

Beijing police detained Xia on November 8, 2014, when he was the lawyer for detained liberal intellectual Guo Yushan (郭玉闪), then the head of the Transition Institute, an independent think tank. Guo had been detained in October 2014 during Xi’s crackdown on supporters of Hong Kong’s “Occupy Central” movement. Xia Lin had also served on his colleague Pu Zhiqiang (浦志强)’s legal team after Pu was detained in May 2014. Prosecutors indicted Xia on a “fraud” charge in December 2015 after twice sending his case back for further investigation. The first-instance trial hearing was held on June 17, 2016. Xia has been held at Beijing No. 3 Detention Center.

The prosecution’s alleged “fraud” case was built on shaky grounds, according to lawyers Ding Xikui (丁锡奎) and Wang Zhenyu, who argued for Xia’s innocence in court. The indictment against him claimed that he defrauded certain individuals an amount over 10 million RMB (approx $1.5 million) for gambling, though the judge convicted Xia over taking 4.81 million RMB (appox. $720,000). His lawyers argued that the supposed victims of fraud had not brought any criminal or civil charges against Xia, and apparently had lent him money willingly. Furthermore, authorities did not provide any evidence of Xia’s gambling debts during the trial proceedings.

The “fraud” charge seemingly was trumped up to punish and tarnish Xia for his longstanding work defending the rights of detained dissidents, rights lawyers, and victims of capital punishment. Lawyer Ding Xikui said in Xia’s defense that his client had told him that police interrogations had not focused on any alleged fraud but exclusively on his work on politically “sensitive” cases, such as those involving Guo Yushan, the Occupy Central movement, Pu Zhiqiang, and Ai Weiwei (艾未未). Xia told his lawyers that he was innocent of all charges, and said the prosecution was a clear act of reprisal against his professional activities.

The prosecutor’s case and the court’s verdict must be thrown out because of numerous breaches of Chinese law and clear violations of international fair trial standards:

A lawyer with Beijing Huayi Law Firm, Xia Lin often worked alongside prominent lawyer Pu Zhiqiang and took on many politically “sensitive” cases pro-bono. He first gained prominence in 2006 for defending Cui Yingjie (崔英杰), a migrant worker and street peddler who had killed a City Urban Administrative and Law Enforcement (chengguan) officer who had confiscated his property and manhandled him. In 2009, Xia represented Deng Yujiao (邓玉娇), a migrant hotel worker who killed in self-defense a local official who tried to rape her, in a case that made headlines around the world. That same year, along with Pu Zhiqiang, Xia worked on the case of arrested environmental activist Tan Zuoren (谭作人), who received five years in prison for attempting to investigate school buildings that collapsed during the Sichuan earthquake in 2008. Xia and Pu also represented Ai Weiwei and his wife in the tax evasion case brought against their company Beijing Fake Cultural Development, Ltd. following the artist’s detention in 2011. Xia has also been an active voice in the legal community, highly critical of China’s frivolous laws, lack of judicial independence, and disrespect for rule of law.

CHRD asks the international legal community, international human rights NGOs, governments maintaining a respect for rule of law, and multilateral human rights bodies to join us to call for the release of lawyer Xia Lin and all other arbitrarily detained/imprisoned lawyers in China. The UN High Commissioner for Human Rights and independent experts—the Special Rapporteur on the Independence of Judges and Lawyers, the Working Group on Arbitrary Detention, and other relevant thematic Special Procedures—should make inquiries and speak out about the travesty of justice in China’s intensifying persecution of human rights lawyers.

Lawyer Xia Lin received a 12-year prison on September 22, in one of the Chinese government’s harshest acts of political retaliation against human rights lawyers under President Xi.