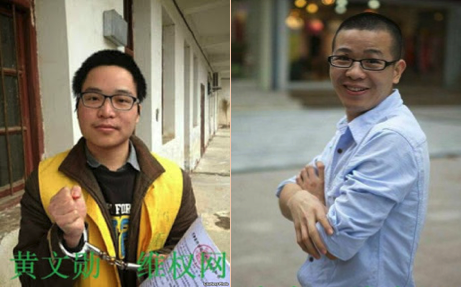 Huang Wenxun (left) has received a 5-year prison sentence for exercising his right to peaceful assembly. Xiao Yuhui (right), who has assisted victims of family-planning policies, has been criminally detained.

Young activist Huang Wenxun (黄文勋) received a five-year prison sentence on September 28 in Hubei Province, after spending three years in pre-trial detention, one of the longest such cases that CHRD has documented in recent years. The Xianning City Intermediate People’s Court convicted Huang, 26, of “inciting subversion of state power.” The verdict cited his role in a human rights advocacy tour called “Enlightening China,” which he had initiated in order to encourage civic activism and raise awareness of democracy and rule of law.

Huang’s trial, held on on June 24, was marred by violations of his legal rights. During the trial, the judge repeatedly cut off Huang’s lawyers as they tried to present their defense argument and question the prosecution’s “evidence.” Before the trial, Huang had been held for over 37 months without seeing a judge after Chibi City police detained him on May 25, 2013. Huang was reportedly tortured with electric shocks at the Jiayu County Detention Center, where he was initially held. Huang was later transferred to Chibi City Detention Center, where he is now held. His sentence is set to be completed in May 2018. This past May, two fellow participants in the rallies, Yuan Xiaohua (袁小华) and Yuan Fengchu (袁奉初), received respective sentences of three-and-a-half and four years.

The court stated in its verdict that Huang had used the Internet, street protests, and the advocacy tour to “endanger national security,” an ill-defined act under Chinese law. As “evidence” of his crimes, the court referenced articles and interviews that Huang had given to the overseas website Boxun News. The court sentenced Huang for participating in acts of “inciting subversion” (Article 105) but not for acting as a ringleader, which carries a minimum five-year sentence. However, the court cited Article 106 when handing down the heaviest possible sentence for a non-ringleader, which calls for certain national security offenses to receive heavier penalties if the defendant colluded with foreign forces.

Guangdong police criminally detained activist Xiao Yuhui (肖育辉) on suspicion of “credit card fraud” on October 4. In the month prior to his detention, Xiao had engaged in many advocacy activities, particularly to help victims of family-planning regulations in seeking redress. On October 3, plainclothes state security personnel and local police investigating financial crimes seized Xiao at his relative’s home, after forcing their way into the residence in Huizhou City. The officers warned Xiao’s family to not inquire about the case since it allegedly involves “national security.” Police also searched Xiao’s residence on October 4, seizing phones and computers, and summoned Xiao’s ex-wife for questioning the next day. According to Xiao’s lawyer, police claimed that his client accumulated 10,500 RMB (approx. $1,500 USD) in credit card debt with the Shanghai Pudong Development Bank. Xiao is being held at Huizhou City Detention Center. Xiao could face up to five years in prison because the amount of money he is accused of defrauding is considered “relatively large,” according to Article 196 in the Criminal Law.

Born in 1980, Xiao Yuhui has for years provided legal assistance to families who lack household registration for children born “illegally”—as out-of-quota births—and have to pay a fine called a “social maintenance fee” that local governments demand for registering such children (in order to provide them public benefits). Xiao has reportedly helped families file over 100 administrative lawsuits against government agencies related to such cases of policy discrimination, including many in Guangzhou and Zhongshan.