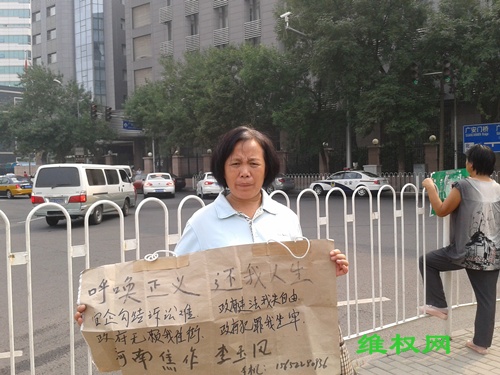 Henan activist Li Yufeng and about 10 petitioners were seized by police at the Beijing South Railway Station on October 26, 2015, apparently after the group took a photograph at a social outing. Li was criminally detained the next day on suspicion of “gathering a crowd to disrupt order of a public place,” while the others were only given five-day administrative detentions. On November 26, Li was released on bail, with police stating that her “offense was not serious,” and she was forcibly sent home to Jiaozuo City. However, once back in Jiaozuo, Li was criminally detained again on suspicion of the same alleged “crime,” and sent to Jiaozuo City Detention Center. Li was formally arrested four weeks later. Petitioners taken into custody in Beijing at the same time as Li believed that her detention was clearly an act of reprisal for her overall advocacy work.

Defended by rights lawyer Chang Weiping (常玮平), Li was tried in closed proceedings in July and August of 2016, but the court only announced her four-year sentence in January 2017. The punishment was upheld on appeal on May 8, 2017. Li’s sister went to visit her in prison on June 12, 2017, but was unable to see her. The sister instead was given information that made her concerned about Li’s condition; officials reportedly said that Li had been taken to a hospital after having a “conflict” with police officers, and a doctor told her sister that Li was suffering from gallstones. According to December 2017 update from Li’s sister, the prison gave Li treatment for the gallstones, though she is still in pain.

Li was released in February 2019 at the end of her sentence.

However, on July 5, 2019, Li Yufeng went with her friend Feng Xixia to file an appeal at the Supreme People’s Court in Beijing, and then went to the Henan Provincial Court’s office in Beijing to file a complaint about how she had allegedly suffered a case of miscarriage of justice. She was then taken away by “stability maintenance” people from Jiaozuo while in Beijing. She was criminally detained on August 8, 20219 on the charge of “picking quarrels and provoking trouble”.  She is currently detained at the Jiaozuo Detention Center.

In September 2020, the case was transferred from the procuracy to the Jiaozuo City Central Station District Court.

On September 26, 2021 she will go on trial at the same Jiaozuo City Central Station District Court.

According to her lawyer, the procuracy’s case of “picking quarrels and provoking troubles” against her consists of three main parts:

Before her current detention, Li Yufeng had been targeted by authorities for over a decade due first to her petitioning and then her broader activism. Most recently, she had been put under criminal detention on October 1, 2014, after helping organize and taking part in an activity to greet activist Yuan Dong (袁冬) upon his release from prison. She was charged with “disrupting order of a public place” and arrested on November 6, 2014. Li alleged to her lawyer that she had been tortured into confessing to criminal behavior, and she was held for over nine months before finally being released in June 2015, on “bail pending further investigation.” That detention coincided with the crackdown on mainland supporters of the Hong Kong pro-democracy protests that took place in the fall of 2014, when authorities were on especially high alert to stifle acts of assembly and expression by Chinese activists. In addition, Li has been among many in China’s civil society to annually memorialize the victims of the 1989 Tiananmen Massacre.

Li began petitioning in the early 2000s, studying law on her own and filing a lawsuit over the demolition of her home. Though a court ruled in her favor, authorities did not respect the court’s decision or provide Li any compensation, leading her to petition to seek justice. In retaliation, authorities sent Li to Re-education through Labor (RTL) for 15 months in October 2004, accusing her of “disrupting work order.” After her release, Li resumed petitioning and started to help others defend their own rights. She suffered more retaliation when she was issued a two-year prison sentence for “disrupting official business” in December 2007. As a past RTL detainee, Li actively called for the abolition of that now-defunct system of administrative detention.

Born on March 10, 1958, Li Yufeng, a Christian, was nominated in 2017 for the “Oscar Freedom Human Rights Award,” which was established in 2014 by overseas Chinese in the United States to honor the advocacy work of human rights defenders in China.