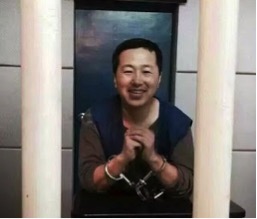 Courts in Guangdong Province sentenced four activists to prison between November 24-27, with the punishments sparking international criticism over the unfair trials and mistreatment of the detainees. The activists have languished in detention ever since being seized during the first crackdown against civil society under President Xi Jinping, which began in the spring of 2013.

On November 27, the Tianhe District People’s Court in Guangzhou sentenced Guo Feixiong (郭飞雄 aka Yang Maodong 杨茂东) and Sun Desheng (孙德胜 aka Sun Sihuo 孙思火) for their alleged roles in early 2013 demonstrations in Guangzhou calling for media freedom and government transparency. Guo received a six-year sentence while Sun received two-and-a-half years’ imprisonment. Both men were sentenced for “gathering a crowd to disrupt order of a public place,” but the court unexpectedly charged and convicted Guo with the additional crime of “creating a disturbance.” The court only added the charge to Guo’s sentence on the day of the hearing, which allowed the court to lengthen his punishment and prevented his lawyers from mounting a defense against the charge. One clear effect of this harsher sentence is that he would not become eligible for release as soon, as pre-trial detention is counted as time served. Guo and Sun had been put on trial almost exactly one year ago, on November 28, 2014.

Authorities accused the two men of being the “ringleaders” of a number of advocacy campaigns that were targeted in President Xi Jinping’s crackdown on peaceful assembly, association, and expression, which began in March 2013. Taken into custody in August 2013, Guo and Sun have been held at Tianhe District Detention Center. Guo’s health has seriously declined in detention, and he has allegedly been tortured. Sun is expected to be released in about three months.

Also on November 27, the same Tianhe court handed activist Liu Yuandong (刘远东) a three-year prison sentence. Liu had been accused of taking part in some advocacy campaigns with Guo and Sun, including a rally for press freedom held in support of Southern Weekly newspaper in January 2013. He was put on trial in January 2014, on charges of “gathering a crowd to disrupt order of a public place” and “fraudulent reporting of capital during incorporation of a company.” Liu has told his lawyer about torture and mistreatment he has faced in Tianhe District Detention Center. With time served, Liu is due to complete his sentence in February 2016.[1]

In another case, the Shenzhen Intermediate People’s Court sentenced Yang Lin (杨林 aka Yang Mingyu杨明玉) to three years on a charge of “inciting subversion of state power” on November 24. Police first seized Yang in June 2013, after he took part in anti-corruption protests and pro-democracy activities around the anniversary of June Fourth. Yang turned to political activism after he faced reprisals for seeking remedies for workplace injuries. Tried in May 2014, Yang has been held in Shenzhen No. 2 Detention Center.[2]

Activist Chao Baowen (柴宝文), who was given a 3-year prison term, is one of five human rights defenders sentenced in late November .

Anhui activist Chai Baowen (柴宝文) was sentenced to three years in prison by a Heilongjiang court, which held its hearing behind closed doors on November 17, according to Chai’s lawyer. The Xiangfan District People’s Court in Harbin convicted Chai of “creating a disturbance,” but his lawyer reportedly only learned about the sentencing on November 20, after he received a call from the presiding judge. Police took Chai, also known by his screen name Wild Jasmine Wanderer (野茉莉走天涯), into custody on June 21, 2015, after he posted a message on weibo about the police shooting death of petitioner Xu Chunhe (徐纯合) in a train station in Heilongjiang in early May. Chai had previously taken part in a campaign in 2013 in Hefei City for the right of the daughter of activist Zhang Lin (张林) to attend elementary school.[3]

Verdict Upheld Against Gao Yu But Sentence Reduced, Medical Parole Will Allow Her to Serve Punishment Outside Prison

The Beijing Higher People’s Court upheld the guilty verdict against dissident journalist Gao Yu (高瑜) for “illegally disseminating state secrets overseas” on November 26, but reduced her seven-year sentence by two years. On the same day, the Beijing No. 3 Intermediate People’s Court, which sentenced Gao in April 2015, granted the journalist medical parole, a decision that will allow her to serve her term outside of prison. The charge against Gao Yu is reportedly related to the leak of a Communist Party directive against “universal values,” referred to as Document No. 9, to an overseas website in June 2013. Taken into custody in April 2014, the 71-year-old Gao has reportedly been in poor health, suffering from heart disease and high blood pressure. Gao had to be repeatedly hospitalized while held at the Beijing No. 1 Detention Center, and there have been concerns that she may die in prison if not released.[4]

Police in Guangdong took activist Huang Yan (黄燕) into custody on November 26 and criminally detained her the next day on charges of “deliberately spreading false terrorist information.” She was seized by a dozen officers from Shunde District in Foshan City, who also searched her home. Police reportedly claimed that Huang’s detention is related to a message she posted online claiming to want to bomb a police station, which Huang denies was sent. During interrogations, police focused solely on her work helping others defend their land rights in Shunde District. Huang is being held at Shunde District Detention Center. She reported to her lawyer during a December 2 meeting that police have denied her food and water for periods of time, beaten her, and attempted to force her to sign a confession. She spent six days on a hunger strike to protest her treatment. Huang, a cancer survivor, suffers from diabetes and is in very poor health. She has long supported persecuted lawyer Gao Zhisheng (高智晟) and has faced numerous reprisals as a result.[5]

In addition, Henan activist Li Yufeng (李玉凤) and approximately 10 other petitioners were seized by police at the Beijing South Railway Station on October 26. While the petitioners were given five-day administrative detentions, Li was put under criminal detention on unclear charges. On November 26, Li was released on bail and forcibly returned home to Jiaozuo City, where two days later she was criminally detained again for “further investigation” of the same alleged criminal activity. Others involved in the incident in Beijing believe Li’s detention is police retaliation for her activism. Li previously served two years in prison after defending her rights following the forced demolition of her home. She also was detained during the crackdown last fall on mainland supporters of the Hong Kong pro-democracy protests.[6]

The Rights Defense Network, an advocacy group based in the mainland, has documented the cases of 122 human rights defenders who are currently detained or under enforced disappearance in China. The cases include individuals who have been held without trial or tried but not yet sentenced, as well as those under “residential surveillance at a police-designated location,” essentially a form of enforced disappearance. Of the 122 documented cases, the largest numbers are in Beijing/Tianjin Municipalities (23 individuals), Guangdong Province (22), Zhejiang Province (23), and Hubei Province (13).

These cases reveal troubling realities. Eighteen human rights lawyers are among those now under enforced disappearance—a sobering reflection of their suppression under Xi Jinping. Also, two practices affecting human rights defenders have become commonplace: They are being subjected to extended periods of investigation or pre-trial detention—for as long as nearly three years—and are almost always denied medical bail even when suffering from serious health problems.[7]