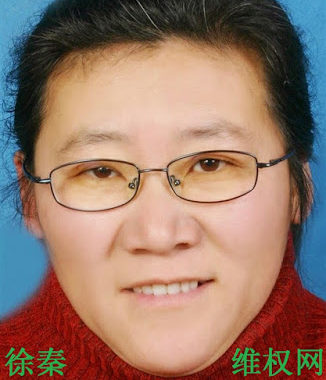 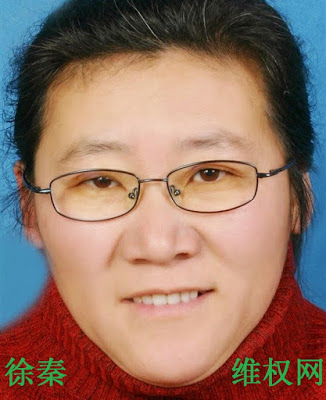 Xu Qin (徐秦), a human rights researcher and activist, was seized by police on February 9, 2018, from her residence in Gaoyou City in Jiangsu. She was put under criminal detention the next day, accused of “picking quarrels and provoking trouble,” though her family did not receive a detention notice until almost two weeks later. Xu Qin’s family brought on lawyer Peng Jian (彭剑) to represent Xu on March 14, and he immediately tried to visit Xu. An officer at the Yangzhou City Detention Center told Peng that Xu Qin had been transferred on March 11 into “residential surveillance at a designated location.” On March 22, authorities cancelled a scheduled meeting between Xu and Peng, apparently because the charge against Xu had changed to “inciting subversion of state power,” a more serious offense in the category of “endangering state security.”

On November 5, 2021, Xu Qin was suddenly taken away from her home by police.

On July 27, 2022, Xu Qin’s family revealed that her lawyer Ji Zhongjiu visited her at the Yangzhou Detention Center and he learned that on June 27, 2022 Xu had become paralyzed. Upon seeing her, Xu was sitting in a wheelchair, looking exhausted, and with poor physical health.

But even in light of her other physical conditions, including heart disease, high blood pressure, and having suffered a stroke, and even after being detained for nearly two years cumulatively, the authorities still have not been able to shake Xu’s determination to plead not guilty.

After the news of her paralysis got out, in September, detention center authorities denied Xu Qin’s lawyer permission to visit her. They also threatened the lawyer and her family about revealing any conditions related to her detention — or else they would be detained in retaliation. But on September 20, Xu Qin’s lawyer was able to visit her. She said she was doing a bit better, and the detention center had arranged for a medical check up and medicine in August.

On November 4, one of Xu Qin’s lawyers received a notice saying that she would go on trial at the courtroom inside the Yangzhou City Detention Center at 9:30am on November 7, 2022 on the. charge of “inciting subversion of state power”.

Before being taken into custody, Xu had engaged in a broad range of advocacy actions, several of which may have precipitated her detention. She had actively called for the release of high-profile human rights defenders, including lawyer Yu Wensheng (余文生), detained in January 2018, and citizen journalist Ding Lingjie (丁灵杰), for whom Xu had launched “Ding Lingjie Watch,” a WeChat discussion group, to raise awareness of her disappearance. Xu also had tried to attend a disbarment hearing in January 2018 for human rights lawyer Sui Muqing’s (隋牧青). Police prevented her from entering, however, and then closely monitored her.

In addition, after joining the group “Human Rights Watch in China” (HRWIC) in 2014, Xu had written articles and granted interviews to both foreign and Chinese media about the government’s rights violations. Xu took up a prominent leadership role with HRWIC in early 2015, becoming its main spokesperson, or general secretary, after the group’s founder, veteran activist and dissident Qin Yongmin (秦永敏), disappeared that January. She and Qin are among many individuals involved with the group, which is mostly made up of petitioners, to be detained or disappeared since 2015, a reflection the government’s increased suppression of independent groups that document and report human rights abuses. Xu Qin was released on “bail awaiting trial” on September 2, 2018. She remained under tight police surveillance and could not be easily contacted.

Born on January 14, 1962, Xu Qin began seeking justice for herself in 2010 by petitioning over an accident involving counterfeit medical equipment that left her disabled. She was detained in November 2013, likely for her role in exposing China’s Food and Drug Administration’s cover-up of hospitals using sham medical products. After failing to gain redress for her personal grievance, Xu, then a Chinese Communist Party member, became disillusioned with the China’s political and judicial system and broadened her advocacy to push for systemic changes, including democratization. She eventually wrote a statement renouncing her Party membership which was posted online in March 2015. Xu was disappeared in January 2016, largely for her deepening engagement in rights defense activities with HRWIC, but was released on “bail awaiting further investigation” four weeks later.