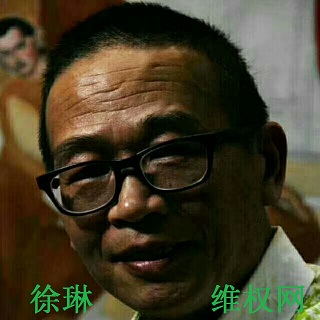 Xu Lin, a Guangzhou-based songwriter, freelance writer, and activist, was seized in his hometown of Zhuzhou in Hunan Province in September 2017 by officers from the Guangzhou City Public Security Bureau. At the time, Xu had returned to Hunan to take care of his ill father. Before taking him to Guangzhou, the officers searched the residence and confiscated many of his possessions, including his computer, cell phone, books, and notebooks. On the day Xu was seized, Liu Sifang (刘四仿), a singer-songwriter and Xu’s musical collaborator, was criminally detained in Yichun Ciy, Jiangxi Province.

Just prior to their detentions, the two men had released songs dedicated to professor and dissident Liu Xiaobo (刘晓波), who had died in custody in July 2017 while serving an 11-year prison sentence. They had also drawn attention to a so-called “Twitter Party,” a reference to the Twitter followers of Guo Wengui, the self-exiled business tycoon who had frequently accused top Chinese officials of corruption. Xu Lin and Liu Sifang were among many from China’s civil society detained in the summer and fall of 2017 for expressing support for Liu Xiaobo and, more broadly, for promoting democracy and human rights online. Police detained human rights defenders during that period of time due to the led up to the 19th Party Congress in October and Liu Xiaobo’s recent death. On November 2, 2017, Xu was formally arrested while Liu was released on bail.

Reportedly, after Xu was detained, he had said he did not wish to have a lawyer, since he wanted to avoid having anyone targeted by authorities for defending him in such a sensitive case. Despite his supposed wish, Xu’s family hired lawyer Liu Zhengqing (刘正清), who requested to visit Xu on October 16, 2017, but authorities did not permit them to meet. On November 13, another lawyer, Lin Qilei (蔺其磊), met Xu in the detention center and assumed representation in his case. Xu told lawyer Lin that police had questioned him intensely in three shifts between October 5-20, unsuccessfully trying to get him to confess to criminal behavior on video. Xu said he was mostly interrogated about his songs, writings of his that appeared online, and comments he had posted on social media. Even though Xu was given time to rest during the two-week span of questioning, he was unable to sleep well since his detention cell was so overcrowded.

Prosecutors indicted Xu in January 2018, and the Nansha District People’s Court heard his case on July 27, 2018; Xu’s lawyer and wife only received four days’ notice of the hearing. The court did not issue a verdict after the proceedings. In his defense statement, Xu Lin insisted he was a victim of political persecution and told the court: “If I am found guilty, it’s not my humiliation, but your humiliation.” Xu’s wife said she was prevented from attending the trial, which was held in a very small courtroom, and she instead had to watch a video feed in a nearby room. In addition, police blocked Xu’s friends and supporters from coming near the courthouse.

Xu was sentenced to three years’ imprisonment on December 7, 2018. In its verdict, the court stated his punishment was based on Xu’s use of social media and other online tools in disseminating “disruptive” content, including his song lyrics. He appealed the sentence, but the original ruling was upheld on May 14, 2019. On June 5, 2019, authorities transferred Xu to Foshan Prison to serve his sentence. Xu was released in September 2020 at the completion of his sentence.

Xu’s lawyers and family have been concerned that he has been tortured and ill-treated in detention, including possibly being beaten by officers who have tried to force a confession. In May 2018, Xu was admitted to Guangzhou Armed Police Hospital with a medical emergency. When Xu’s wife asked the detention center about his condition, police claimed that he had gotten ill due to food in detention, but she doubted that reason since he had not previously complained about the food. In June 2018, Xu Lin was diagnosed with “breast hyperplasia,” an enlargement of breast tissue that often occurs in the early stages of cancer. Worried about Xu’s health, his wife and lawyer applied for his release on medical bail, but authorities denied the request. Xu’s wife has maintained that he did not have any health problems before being detained.

Born on April 9, 1964, Xu Lin had long been concerned about China’s human rights situation, which he adopted as a major theme in his songwriting and other activities promoting democracy and human rights. Xu, an independent Chinese PEN member, began writing political articles, poems, and songs in the late 1990s. Starting in 2010, he had frequently taken to streets in Guangzhou and Shenzhen, participating in public rallies, making speeches, and organizing gatherings of other citizens supportive of political reforms in China.

In the past few years, authorities had taken Xu Lin into custody many times due to what they perceived as politically provocative behavior, particularly as expressed in his songs. In 2012, Xu recomposed the poem “It’s Time,” which was written by Zhejiang dissident Zhu Yufu (朱虞夫) during the period of Jasmine Rallies the year before. In retaliation for the song, which Xu titled “Now Is the Time” (《就是现在》), Guangzhou police detained him in April 2012 on suspicion of “inciting subversion of state power” and later placed him under house arrest. After police lifted restrictions on his movement, Xu planned to take part in a pro-democracy rally in August 2012 in Guangzhou and deliver a speech about China’s political situation. However, police took him into custody before the event and then held him in a secret location for three months. Authorities pressured Xu’s employer into firing him in 2015 after he released “Song for Justice Lawyers” (《正义律师之歌》) that August. The song, in which Xu expressed support for Chinese lawyers detained in the “709 Crackdown” and other victims of rights violations, also led police to put Xu under house arrest for a month.