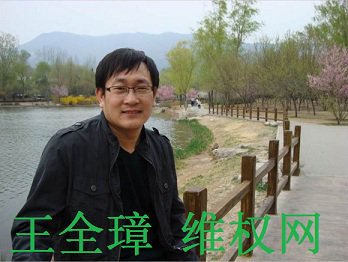 (Network of Chinese Human Rights Defenders—January 28, 2019) Human rights lawyer Wang Quanzhang (王全璋) received a 4.5-year prison sentence for “subversion of state power” today, after a closed-door trial in late December and over three years of incommunicado pre-trial detention. The Chinese government must release Wang Quanzhang immediately and unconditionally, end the harassment of his family, compensate Wang and his family for the harm done to them, and ensure an independent investigation is conducted into allegations that state agents subjected Wang to torture, forced disappearance, and arbitrary detention.

Tianjin No. 2 Intermediate Court convicted Wang at a secret hearing and announced his sentence as 4 years and 6 months imprisonment and deprivation of political rights for 5 years. Police once again prevented Wang’s wife Li Wenzu (李文足) from attending the hearing. It is unknown if Wang had any legal representation after he dismissed his government-appointed lawyer at the start of the December 26 trial.

Li Wenzu released a statement after the verdict announcement, restating that her husband is innocent of all charges, and that public security and judicial officials are guilty of torturing him and violating his and other lawyers’ legal rights.

The conviction of Wang is unfair after the government’s systematic abuse of Wang’s legal rights and human rights from day one of his detention on August 3, 2015 during the “709 Crackdown” on human rights lawyers. According to the prosecutor’s indictment, the case against Wang is centred on his legitimate activities in exercising his human rights and defending his clients’ legal rights. Authorities subjected Wang to months of enforced disappearance (secret detention at an undisclosed location under “residential surveillance at a designated location”), held him in prolonged pre-trial detention, reportedly tortured him with electric shocks during interrogations, and denied him all access to lawyers of his own choice and cut off all communication with his family.

One of Wang’s family-hired lawyers, Yu Wensheng (余文生), has been detained incommunicado for over a year in reprisal for his work as a human rights defender, including trying to defend Wang Quanzhang’s rights.

The UN Working Group on Arbitrary Detention ruled in August 2018 that the Chinese government’s detention of Wang Quanzhang was arbitrary and demanded his immediate and unconditional release. The Chinese government, itself a member of the UN Human Rights Council, defiantly ignored the ruling and proceeded with its prosecution of Wang in reprisal for his exercise and defence of human rights.

The international community, including governments, the EU, the UN, bar associations, law firms doing business in China, and law schools with exchange programs with Chinese universities, should express serious concerns about the grave injustice involved in the imprisonment of Wang Quanzhang and other human rights lawyers when meeting with any Chinese official at any level of the government, and call for their release and for China to respect international human rights standards.