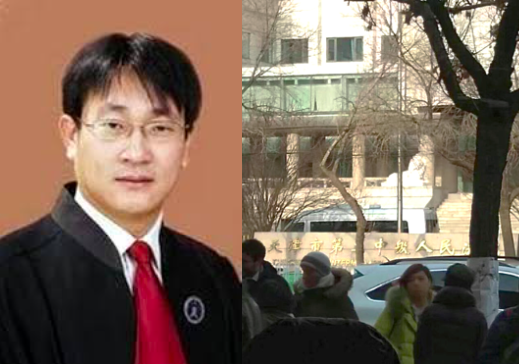 (Network of Chinese Human Rights Defenders – December 26, 2018) – There has not been any resemblance of justice in today’s show trial of human rights lawyer Wang Quanzhang (王全璋) for “subversion of state power” at the Tianjin No. 2 Intermediate Court. The Chinese government and Xi Jinping, who touted “ruling the country with law” along his ascendance to power, should instead be on trial for violating Wang Quanzhang’s legal rights written in Chinese law and for abusing his human rights.

Chinese authorities subjected Wang Quanzhang to 3.5 years arbitrary and incommunicado detention, during which he was reportedly tortured. Authorities put Wang’s wife, Li Wenzu, under house arrest on December 25 to block her from attending the trial. In the early morning on Christmas day, she found police blocking all the exits from her housing compound when she tried to get out.

This morning’s trial, conducted behind closed doors, appeared to end without a verdict being announced. A brief notice appeared on the court’s official website in the early afternoon: “the case involves state secrets, the court decides not to conduct public trial. The case’s verdict will be announced on a selected date.”

Short of freeing Wang Quanzhang and compensating him for depriving him of his liberty and abusing his human rights, no trial or any verdict against him could possibly be fair. The Tianjin No. 2 Procuratorate’s 2017 indictment indicates that the harsh persecution of Wang Quanzhang is in reprisal for his human rights activities. The indictment cited as “evidence” of “subversion” Wang’s collaboration with a Swedish activist in registering an NGO in Hong Kong and receiving overseas funding for legal assistance, trainings, and publishing human rights reports. Authorities also cited Wang’s participation in protests against the 2014 detention and torture of four rights lawyers in Heilongjiang, where Wang himself was briefly detained and tortured. His legal representation of criminal cases involving “evil cults,” referring to prosecuted Falun Gong practitioners, in 2013-14 was also cited as “criminal activities.” The Beijing Fengrui Law Firm, where Wang practiced law, became the main target of a sweeping government crackdown on human rights lawyers launched in July 2015.

The UN Working Group on Arbitrary Detention ruled in August 2018 that the Chinese government’s detention of Wang Quanzhang was arbitrary and demanded his immediate and unconditional release, with state compensation for the harm done to him.

Prior to the trial, police put many rights activists and lawyers under soft detention in their homes. Outside of the Tianjin courthouse, dozens activists and citizen journalists who travelled from all over the country to show their support, were reportedly blocked from entering the court and taken away by police. Some of them remain unaccounted for. Among those who arrived to observe the trial but denied entry are foreign correspondents and diplomats.

The persecution of Wang Quanzhang by China’s legal system has been devoid of any of the markers of “a country ruled with law,” as Xi Jinping wants the world to view China. Since August 2015, Wang has been held in a secret location for several months, denied access to legal counsel most of the time and denied any visits or communication with by his family. He was reportedly subjected to repeated electric shocks, causing him to pass out, during interrogations.

Tianjin authorities denied him access to independent legal counsel for three years, until granting the first meeting with a state-approved lawyer, Liu Weiguo (刘卫国), in July 2018. During that meeting, Wang revealed that authorities had forced him to take unknown medication that caused him to suffer headaches and blurred vision. Two of his previous lawyers, blocked by authorities from ever meeting him, have been punished for taking on his case—authorities removed the law license of lawyer Yu Wensheng (余文生) and then detained Yu in January 2018 and have held him incommunicado on “inciting subversion” charges. Another lawyer, Wang Qiushi (王秋实), was briefly detained in January-February 2017 and forced to drop the case.

In reprisal for her persistent efforts to demand authorities provide any information about her husband’s whereabouts, Wang’s wife Li Wenzu (李文足) has been subjected to collective punishment, including denial of their son’s schooling, evictions from housing, house arrest, and brief detentions on a number of occasions.

Many of Wang’s colleagues at Fengrui Law Firm and in the Chinese human rights legal community have been convicted and sentenced as a part of the “709 Crackdown.” Activist Wu Gan (吴淦), who had been Wang’s colleague at Fengrui Law Firm, is serving an eight-year sentence after being sentenced exactly one year ago today. In August 2016, Tianjin No. 2 Intermediate Court sentenced lawyer Zhou Shifeng (周世锋), the head of Fengrui Law Firm, to 7 years, and activist Hu Shigen (胡石根) to 7.5 years. Lawyer Jiang Tianyong (江天勇) is serving a two-year sentence in Hunan Province for efforts to support detained lawyers. Activists Gou Hongguo (沟洪国) and Zhai Yanmin (翟岩民), and lawyers Li Heping (李和平) and Xie Yang (谢阳) were all convicted and handed suspended prison sentences. Activists Yin Xu’an (尹旭安) and Wang Fang (王芳) received prison sentences for supporting Wu Gan.

Just days after the nationwide crackdown began in July 2015, a Xinhua state media listed Wang Quanzhang in an article that accused Beijing Fengrui Law Firm, of running a “criminal syndicate” and serving as a platform to incite “social disorder” and gain “profits.” Wang went into hiding before policetook him into custody on August 3, 2015. The next day, Wang was criminally detained on suspicion of“picking quarrels and provoking trouble” and “inciting subversion of state power,” and then put under “residential surveillance at a designated location” in Tianjin. After six months of incommunicado detention, Wang was formally arrested on January 8, 2016, for “subversion of state power”—a more serious charge than either for which he was first detained—and transferred to Tianjin No. 2 Detention Center, before later moving him to Tianjin No. 1 Detention Center in July 2017, where he is still being held. Prosecutors indicted Wang in February 2017.

The international community, including governments, the EU, the UN, national and international bar associations, law firms doing business or law schools with programs in China must take action. They can raise the case of Wang Quanzhang, sound the alarm over the gross injustice in this case, and ask for his release when meeting with any Chinese official at any level of the government during conferences or visits.