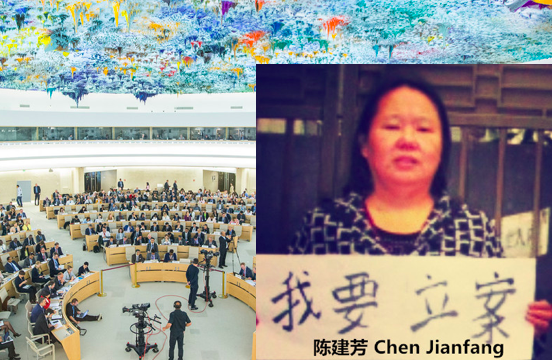 (Chinese Human Rights Defenders—September 9, 2019) A group of non-governmental organizations have sent a letter to UN members states calling for action at the 42nd Session of the Human Rights Council over the Chinese government’s jailing of many human rights defenders protecting economic, social and cultural rights, and closure of civil society organizations promoting equal protection of those rights.

The letter urges UN member states to take action to hold China accountable to its human rights obligations. Governments should raise the cases of individual economic, social and cultural rights defenders who have been detained, the systematic human rights violations in Xinjiang and Tibet, and defend the universal rights of the people of Hong Kong in speeches on the floor of the Human Rights Council, with the delegation of the People’s Republic of China, and in public statements.

The “China model” that champions economic development at the expense of equal protection of universal human rights, promoted by the Chinese government at the UN, has led to violations of all types of human rights in China. In the past year, the Chinese government detained a number of human rights defenders working on environmental, housing, land, labor, public health, and disability rights, as well as those who fight for equal protection against discrimination. Some of them have disappeared into police custody. Authorities also punished citizen journalists and NGO workers who reported on and documented economic, social and cultural rights violations. The systemic violations of civil and political rights in Xinjiang and Tibet have posed an existential threat to the cultural rights, as well as economic and social rights of millions of ethnic minorities in these regions. This so-called “China model” also threatens the greater freedom the people in Hong Kong enjoy under “one country, two systems.”

Some of the individual cases raised in the letter include Cheng Yuan, Liu Dazhi and Wu Gejianxiong, staff of the anti-discrimination and health rights NGO Changsha Funeng, who have been formally arrested on charges of “subversion of state power” and held incommunicado since July 22. He Fangmei, the mother of a baby disabled by a faulty vaccine, has been indicted on charges of “picking quarrels” for campaigning for improved regulations and protection for victims of one of the worst public health crises in China in recent years—defective vaccinations. Environmental rights defenders Ji Shulong and Xue Renyi are in custody for speaking out about pollution and need for environmental protection.

Chen Jianfang, a land and housing rights activist, has been involuntarily disappeared since March 19 after she penned a tribute to the late activist Cao Shunli. Labor rights advocates, including factory workers, activists, researchers, NGO staff, and social workers, have faced increased suppression since a July 2018 crackdown on striking workers at the Jasic Technology Factory in Shenzhen. Citizen journalists reporting on economic, social and cultural rights abuses have faced the wrath of the Chinese government, including the editors of the online independent media platform “iLabour,” Ke Chengbing, Wei Zhili, and Yang Zhengjun, and citizen journalists and NGO workers Huang Qi and Liu Feiyue are serving prison sentences for reporting on rights abuses.

Human rights are indivisible, interdependent, and interrelated. Deprivation of any human right negatively impacts the enjoyment of all other human rights. The Chinese government’s violation of the rights of numerous defenders to civil and political rights of freedom of expression, peaceful assembly and association, the right to be free from arbitrary detention, torture, forced disappearance, and the protection of due process rights, guaranteed in the Universal Declaration of Human Rights, is detrimental to the enjoyment of economic, social and cultural rights in China.

China has failed in providing equal protection of economic, social and cultural rights to all Chinese citizens, as well as, and partly due to, its systematic deprivation of civil and political rights. As a member of the Human Rights Council, China is expected to uphold the highest standards of human rights. We are calling for UN member states to hold the Chinese government to this standard.