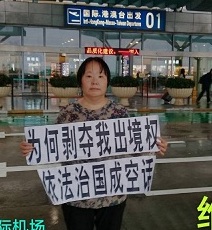 Shanghai police officers seized Chen Jianfang on the night of March 19-20, 2019 from her home in Shanghai and held her under enforced disappearance for months afterwards. Her friends last had contact with Chen through an online messaging platform at 23:15 on March 19 and according to neighbours, on March 20 in the morning, they witnessed approximately seven police cars outside her home. Her whereabouts and any criminal charges against her are unknown. Her husband was taken away at the same time and also put under enforced disappearance, and plainclothes officers have kept their home under surveillance. Authorities have pressured Chen Jianfang’s daughter and the her neighbors to not speak out about her case.

Just days before Chen was seized, she had penned a tribute to a fellow activist and colleague, Cao Shunli (曹顺利), marking the fifth anniversary of Cao’s death in custody, on March 14. On the same day that Chen’s essay was posted, several UN independent human rights experts also released a statement, renewing calls for an investigation into Cao Shunli’s death. In Chen’s essay, she denounced the government’s failure to set up an independent investigation into Cao’s case, writing: “I use my grief as a force to carry on the unfinished work of Ms. Cao Shunli, to continue to defend human rights, and never take a break until China achieves genuine freedom and democracy.”

On June 11, several of Chen’s friends and lawyer Zhang Lei (张磊) attempted to meet with her parents in Hangtou Village, Pudong, Shangai, but were obstructed by a young male relative who kept threatening to call the police. Reportedly, the parents seemed concerned about their daughter’s arrest but were fearful of involving lawyers. The group believed the elderly parents may have been subjected to police intimidation in the three months since Chen disappeared. When the group left, they found a police car parked outside. Lawyer Zhang then went to the Pudong Public Security Bureau (PSB) and attempted to submit credentials to act as a defence lawyer for Chen. The PSB bureau refused to accept Zhang as her defence attorney after speaking with the national security department. Zhang then filed a complaint with the petition office of the Pudong PSB and applied to the Pudong Procuratorate to investigate the refusal of the PSB from accepting his credentials as her defence lawyer.

On July 2, 2019, lawyer Zhang Lei was orally informed by Shanghai authorities that Ms. Chen had been formally arrested on an unknown date in June 2019 on charges of “inciting subversion of state power.” They would not tell the lawyer where she is being held and her location remains unknown. The exact date of her arrest is also unknown. Before Ms. Chen was detained, she had signed an entrustment notice for lawyer Zhang Lei to represent her. However, at this July 2 meeting, authorities rejected lawyer Zhang’s attempt to act as her counsel, stating that the entrustment notice is signed but not dated and thus is not “valid”.

In October 2019, Chen’s lawyer received information that the Shanghai No. 1 Procuratorate had indicted her on September 3 on the more serious charge of “subversion of state power.” The case has been transferred to Shanghai No. 1 Intermediate Court pending trial. Chen is now being held at Shanghai Detention Center. Lawyer Zhang Lei has still not been granted a single meeting with her.

According to the reply to a letter from the UN Special Procedures sent by the Chinese government on October 10, 2019, Chen was arrested on May 22 and indicted on August 30.

Chen Jianfang’s other lawyer, Wu Li (吴莉), had applied for but has not been granted a meeting with Chen. Lawyer Wu Li tried to visit her in early June 2020, the detention center denied the visit on the grounds that they have a rule due to coronavirus pandemic that lawyers can only visit once per investigation stage and that Chen had already had a visit from a lawyer during this stage on September 26. The identity of this lawyer is unknown. Lawyer Wu Li filed a complaint with the local procuratorate over the denial of the right to legal counsel.

On October 1, 2020, Chen’s friend Liu Shihui tweeted that he had received information that Chen had been convicted and sentenced to three years in prison. The trial date, court, and details from the hearing are unknown. We have not been able to verify information about the trial or sentencing with Chen’s family. Neither of Chen’s lawyers were informed.

In 2018, Chen Jianfang was a co-recipient, along with activist Li Xiaoling (李小玲), of the Cao Shunli Memorial Award for Human Rights Defenders, which was established by several human rights organizations in 2014 after Cao’s death. The award recognized Chen’s efforts to promote human rights at the grassroots level, protect vulnerable social groups from abuses, push for civil society participation in international human rights mechanisms, and monitor the Chinese government’s implementation of its human rights obligations. Chen had been a leading land rights activist in Shanghai, railing against rampant land grabs and home demolitions which have become symbolic of a Chinese “development” model virtually devoid of human rights protections. A decade before receiving the award, Chen had begun to work closely with Cao Shunli on advocating for a role for civil society in China’s national report for the country’s first Universal Periodic Review, which took place in 2009. At that time, however, authorities refused to accept any such information from activists and instead retaliated against them.

Chen Jianfang and other activists, including Cao, were again subjected to abuses for their advocacy in the run-up to China’s second UPR, in 2013. Chen and others took to the streets in Shanghai that June and handed out copies of “UPR Recommendations” to China, which UN Member States had made as part of the 2009 review. This action helped raise awareness of the Universal Periodic Review process at the grassroots level; upon learning of the recommendations, some Shanghai residents reportedly expressed hope that more countries would encourage the Chinese government to improve its policies and practices.

Chinese security forces have twice prevented Chen from going abroad to take part in events related to human rights. On September 13, 2013, authorities stopped Chen from boarding a flight at Baiyun International Airport in Guangzhou to attend a human rights training and observe a Human Rights Council session in Geneva—on the same day that Cao Shunli was abducted by police while heading to the same program. Chen insisted that airport security agents produce legal documents for barring her from leaving the country, but they refused. Instead, they reportedly said to her: “Shanghai police told [us] to do this” and that “you are barred from traveling abroad for life.” One officer threatened Chen by saying that they would resort to “armed violence to handle” her if she tried to force her way past security, and another officer tore her plane tickets to pieces. When she protested the deprived freedom to travel, airport police issued her an administrative warning for “disrupting public order” of the airport. Police forcibly returned Chen to Shanghai, where she was detained, interrogated for about 10 hours, and closely monitored by police. Chen was then disappeared in November 2013—just a week prior to the Human Rights Council election, when China would be voted to the body for a second term despite a bleak human rights record and efforts by many, including Chen, to expose the government’s record of rampant rights violations. Chen was again prevented from traveling abroad in October 2017, when she was to take part in a human rights forum in Ireland.

Born on January 23, 1970, Chen Jianfang was formerly a farmer, and she began defending land and housing rights after she and her family lost land to government-backed developers. She went on to expand the scope of her advocacy, exposing systemic causes of rights abuses and the Chinese government’s persecution of social and economic rights defenders’ civil and political rights. Under constant threat of state reprisal, Chen has been locked up in “black jails” (makeshift detention facilities), and police also detained her for 15 months at a Re-education through Labor camp in 2010-11.