September 26, 2019       Comments Off on China: Order Independent Investigation into Death in Detention of Hunan Activist 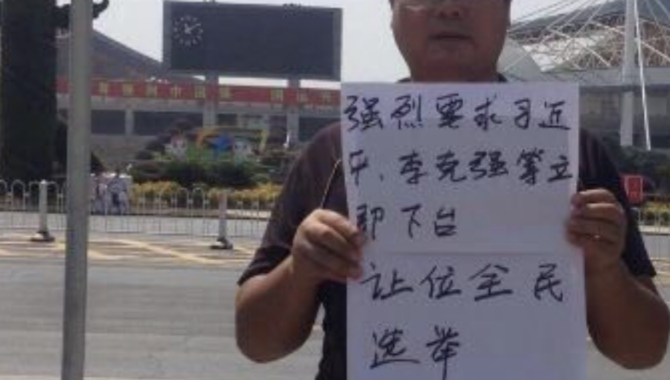 (Chinese Human Rights Defenders—September 26, 2019) The Chinese government must investigate allegations of torture and the death in detention of human rights activist Wang Meiyu (王美余) and hold the perpetrators of torture and extrajudicial killing criminally accountable. Authorities must remove physical restrictions on Wang Meiyu’s family members and they should be free to speak and pursue justice for Mr. Wang.

On September 23, Cao Shuxia, Wang’s wife, received a call from the police that her husband had died that day at Hengyang City People’s Liberation Army No. 169 Hospital. Police did not provide any information about the exact cause of his death. Cao reportedly viewed Wang’s corpse and saw injuries to his face and bloodied eyes, ears, mouth and nostrils. Police pressured her to accept their assertion that Wang’s death had been an accident following an acute illness, but she refused. Since the evening of September 23, Cao and Wang’s mother have been under police control at their home and Cao’s cellphone has been disconnected, according to CHRD’s sources. Human rights lawyer Xie Yang (谢阳) and activist Chen Yanhui (陈燕慧) were put under police control after armed officers arrived at their hotel in Hengyang City, Hunan in the evening of September 25 and held until around 3pm the next day. They had met to discuss the case and Xie to offer legal advice.

Police detained Wang two months ago in apparent reprisal for his repeated attempts to exercise his right to freely express his political views. In 2018, Wang had publicly held up signs calling for China’s top leaders Xi Jinping and Li Keqiang to step down and for national democratic elections to be held, and then later, posted photos of his protest online. Police briefly detained him in July after his protest and subjected him to torture, in allegations Wang wrote about online in November 2018. Afterwards, Wang began petitioning (trying to submit complaints) at the Hunan provincial Letters and Petitions Office in Changsha.

Police suddenly detained Wang again on July 8, 2019 in Changsha in an apparent nationwide crackdown to prevent citizens from petitioning in Beijing and provincial capitals during the “sensitive” period ahead of China’s National Day on October 1. Police brought him back to Hengyang and put him under criminal detention. On July 11, Hengyang police informed Wang’s family he was being held on suspicion of “picking quarrels and provoking trouble” at Hengyang City Detention Center. Wang had been allowed to meet his lawyer three times, once on July 17, when he reported very poor conditions in the detention center, in August, and for the final time in early September. Wang, 38-years-old, began his civic activism after his home was forcibly demolished years ago.

Wang Meiyu’s death follows a similar pattern of detainees being tortured to death while in custody in China, where the accused torturers and officials responsible for the deaths have largely enjoyed total impunity. In most of these cases, the victims have been human rights activists, dissidents, or from certain religious or ethnic minorities. In two recent cases in Liaoning Province, after two activists died under suspicious circumstances in detention in October 2018 and January 2019, authorities reportedly responded by covering up the deaths, blocking information, intimidating family members, and refusing to investigate or prosecute the accused perpetrators.

The Chinese government has failed to abide by China’s own criminal code sanctioning acts of torture and providing access to families for legal redress and state compensation. As a party to the Convention against Torture and Other Cruel, Inhuman or Degrading Treatment or Punishment, the Chinese government is obligated under international law to take effective action to prevent torture, allow a prompt and impartial investigation of allegations of torture, hold the perpetrators accountable, and ensure the victim’s family receives fair and adequate compensation. As a member of the UN Human Rights Council, China has the responsibility to promote and protect human rights and should be transparent about acts of torture within its borders and measures taken to end torture.