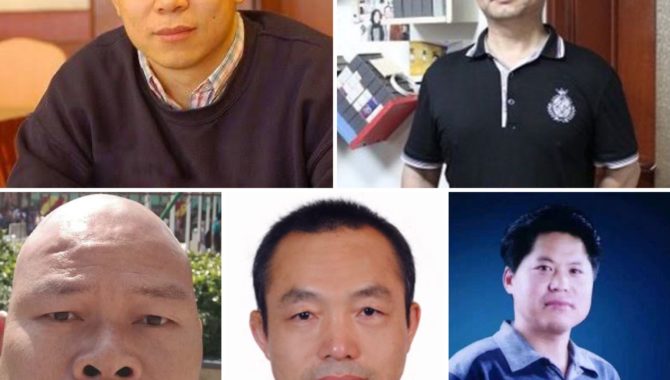 Police in Shandong Province have charged debarred lawyer Ding Jiaxi (丁家喜) with “inciting subversion of state power” and put him under formal arrest, according to a notification dated June 19, received by his family on June 23. Mr. Ding is detained at the Linshu County Detention Center in Shandong. Xu Zhiyong’s (许志永) sister received a phone call from Shandong police about Xu’s formal arrest on June 20, though the family has not received a formal notice. Xu’s exact location and the specific charges against him remain unknown.

Ding Jiaxi and Xu Zhiyong, two leading figures in the New Citizens Movement, crushed in 2013 by the government, have already spent years in prison. On February 15 this year, Xu was detained on suspicion of “inciting subversion” in Guangzhou where he was laying low after participating in a peaceful gathering in Xiamen in December 2019. Authorities also detained Mr. Ding and several other activists between December 2019 and February 2020 for their participation in the same gathering. Officials released some activists after questioning but subjected four individuals to enforced disappearance under “residential surveillance in a designated location” for months. On June 18, the four detainees, Zhang Zhongshun (张忠顺), Dai Zhenya (戴振亚), Li Yingjun (李英俊), and Li Qiaochu (李翘楚) were released on bail awaiting trial on “inciting subversion” charges.

The Suzhou Intermediate Court in Jiangsu Province sentenced human rights defender Ge Jueping (戈觉平) to 4.5 years in jail on “inciting subversion of state power” charges on June 24. Mr. Ge has already been subjected to a 3-year and 8-month prolonged pre-trial detention, including being put under “residential surveillance in a designated location.” His trial took place more than a year ago on May 13, 2019. Mr. Ge, who suffers from serious illnesses, including hypertension, heart palpitations, parotid gland cancer, has not received proper medical treatment at the detention center.

Human rights lawyer Chen Jiahong (陈家鸿) (aka Chen Wendan, 陈文胆), was put on trial in a closed-door hearing on “inciting subversion” charges at the Yulin City Intermediate Court, Guangxi Zhuang Autonomous Region, on June 24. It’s unclear whether Mr. Chen had legal representation during the trial, as he had been pressured to fire the lawyers of his choice in March after telling one he had been mistreated in detention. The trial came more than one year after he was taken into custody. The charges against him have been linked to his online speech critical of the government, his condemnation of the abolition of presidential term limits, as well as his pro-democracy views. Mr. Chen had been held at the Yulin City Detention Center.

Police in Liaocheng City, Shandong Province, formally arrested poet Zhang Guiqi (张桂祺, pen name Lu Yang 鲁扬) on “inciting subversion” charges, according to his wife, who received a police notification on June 19. Mr. Zhang, a member of the Independent Chinese PEN Center, was detained on May 1 this year for his comments critical of the government, which he made online under his screenname “Luxi Fanatic” (鲁西狂徒). He is being held incommunicado at the Liaocheng City Detention Center.