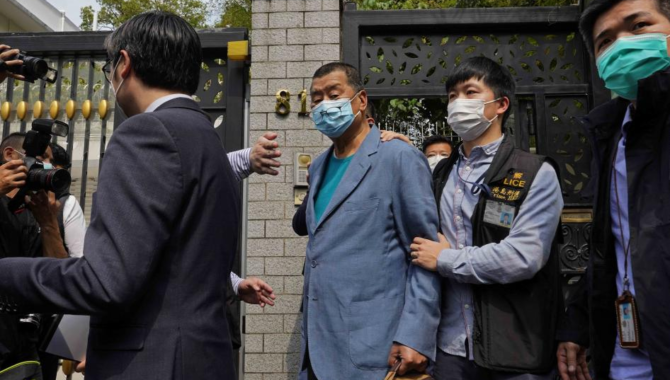 (Chinese Human Rights Defenders—August 25, 2020) Eight weeks since the Chinese Communist Party imposed the National Security Law on Hong Kong, authorities have deployed it in an escalated crackdown in violation of Hong Kong residents’ human rights and the city’s rule of law system. The crackdown began soon after the law went into effect on June 30. It has involved arbitrary arrests of peaceful protesters and pro-independence advocates, media censorship, interference in the democratic election process, and intimidation against overseas activists who fled the city out of fear for retaliation. The National Security Law has been used to legitimize the violation of human rights enshrined in Hong Kong’s Basic Law and the International Covenant on Civil and Political Rights. The Hong Kong Police Force, now armed with a national security unit, have carried out these operations under the pretext of implementing the National Security Law.

Beijing imposed the National Security Law in response to the mass protests in Hong Kong, which broke out since the anti-Extradition Bill demonstrations in June 2019. Though the protests quieted down amid the COVID-19 pandemic, authorities exploited the public health emergency to clamp down on pro-democracy activities. The CCP imposed the law on Hong Kong on June 30, 2020 as the leaders in Beijing felt threatened by Hong Kong people’s strong opposition to its encroachment on their autonomy.

The international community has urged Beijing to withdraw the National Security Law on the grounds that its enactment violates the Hong Kong Basic Law and its provisions run counter to Hong Kong’s international treaty obligations to protect human rights. Hong Kong is a party to the International Covenant on Civil and Political Rights (ICCPR) since the UK ratified the covenant in 1976 and extended it to Hong Kong, under which, the Hong Kong government is obligated to guarantee freedom of expression, peaceful assembly, association and other civil political rights. Based on these legal and treaty commitments, the Hong Kong government must release anybody arrested under the National Security Law for exercising their basic civil and political rights. Government officials, including police officers, must be held accountable for violating human rights. The rapid decline of human rights conditions in Hong Kong demands continuous international attention and strong substantive actions.

On July 1, 2020, the day to mark the 23rd anniversary of Hong Kong’s handover to China, the police reported that they arrested over 370 people, including six males and four females on suspicion for breaching the National Security Law, including for showing leaflets and banners with the reference to “Hong Kong Independence.” Others were arrested for offences including “unlawful assembly,” “disorderly conduct in a public place,” “furious driving” and “possession of offensive weapon.” Also on the same day, a 22-year-old youth wearing a T-shirt with the phrase “Free Hong Kong” was arrested and only released on bail after 30 hours.

On July 6, the police arrested eight protesters in a shopping mall in Kwun Tong in Kowloon because they held blank placards in a silent protest after the government claimed that the popular slogan “Liberate Hong Kong; revolution of our times” was illegal.

On July 29, 2020, Hong Kong police arrested four former members of pro-independence student group Studentlocalism, which was disbanded before the law came into effect, on suspicion of “inciting secession.” The four, aged 16-21, were released on bail pending further investigation on July 31. Police ordered them to remove social media messages and banned them from leaving the city for the next six months.

On the same day, police arrested three student leaders: Agnes Chow, student activist who quit the now disbanded Demosistō the day before the National Security Law came into force; Wilson Li Chung-chak, a freelancer for ITV and former member of now disbanded student activist group Scholarism; and Andy Li, a member of Election Observation Mission. They were released on police bail on the next day.

Censorship of public expressions and the media

After the National Security Law was imposed, there were a number of incidents raising concern about censorship of protest-related public expression. On July 2, 2020, a restaurant in Shau Kei Wan on Hong Kong Island said police warned it to remove its “Lennon Wall”, which was a popular act in support of the Umbrella Movement. Supporters posted colorful post-it memo papers with written messages to stand up with the protests, which became popular again and spread to various public places and restaurants during the Anti-Extradition Bill protests since June 2019. The restaurant owner said the police warned him that displaying such materials could amount to breaching the National Security Law.

Foreign journalists also face challenges, such as losing their work visas if they cover political and human rights issues under the new Law. Out of concerns for the National Security Law’s overreach to press freedom, the New York Times announced on July 14, 2020 that it would relocate its Hong Kong-based digital news operations to Seoul, South Korea. The paper also revealed that authorities in Hong Kong refused to renew a work permit for a China correspondent of the New York Times who had to leave Beijing in May after the Chinese government refused to renew his journalist visa. In early August, the Foreign Correspondents Club of Hong Kong said that foreign journalists in the city have experienced unusual delays in getting visas in recent months. It said that the Hong Kong government has not explained any change to its visa policy despite multiple enquires from media.

Hong Kong authorities took several measures under the new Law to cripple the opposition political camp that challenge Beijing-backed candidates. On July 30, 2020, 12 pro-democracy candidates, including former legislators, were disqualified by election officials from running for the Legislative Council in the upcoming election. The sanction clearly targeted them due to their political views, criticism of the National Security Law, and calls on the international community to sanction Beijing and Hong Kong officials.

On July 31, 2020, the Hong Kong government invoked emergency legislation to postpone for one year the Legislative Council elections, which was originally scheduled to take place on September 6, 2020, citing challenges arising from the COVID-19 pandemic. The Hong Kong government sought approval from the Standing Committee of the National People’s Congress to resolve the legal issues created by delaying the LegCo term beyond what is allowed under the Basic Law. This sounded the alarm about China’s top legislature directly interfering in Hong Kong’s autonomy.

Days after the law was implemented, public libraries removed books from the shelves including those written by prominent student activist Joshua Wong and pro-democracy legislator Tanya Chan.

On July 31, 2020, Benny Tai, a law professor at the University of Hong Kong, was sacked by the university. Tai was one of the initiators of both the “Occupy Central” movement and the pro-democracy primary of the Legislative Council. This incident indicated further concern of diminishing academic freedom in the city. The timing of the stripping of his professorship raised alarm in the academic community about the blatant restrictions under the new Law on freedom of expression and exercise of civil and political rights on university campuses. Benny Tai was sentenced to 16 months’ imprisonment in April 2019 for his role in the Umbrella Movement in 2014. He was granted bail in August 2019, pending an appeal.

Within the first month of the law’s implementation, Hong Kong authorities used the controversial Article 38 provision to target overseas activism and intimidate critics in the international community, including one US citizen.

On July 31, 2020, China’s state television CCTV announced that Hong Kong authorities had issued arrest warrants for six pro-democracy activists on suspicion of violating the National Security Law. China’s state media named the six: Nathan Law (founding chair of the now disbanded student-led political party Demosistō and a former legislator);  Wayne Chan Ka-kui (convenor of the political group Hong Kong Independent Union); Honcques Laus (founder of the pro-independence group Hongkonger Utilitarian Party); Samuel Chu (a US citizen who founded the DC-based Hong Kong Democracy Council and the son of Reverend Chu Yiu-ming, one of the three founders of the Occupy Central movement); Simon Cheng (a former officer of the British Consulate-General in Hong Kong who was arrested and detained during a trip to Shenzhen in August 2019), and Ray Wong Toi-yeung (founder of the localist group Hong Kong Indigenous who fled to Europe in November 2017).

The National Security Law has had a profound chilling effect in the short nearly two months of its implementation in Hong Kong. The Law is particularly potent in suffocating the free expression characteristic of Hong Kong’s vibrant civil society.

CHRD urges the international community to speak out publicly about the rapidly deteriorating human rights conditions in Hong Kong. China must face real consequences for its blatant attempt to eradicate the space for freedom, democracy, and rule of law enjoyed by Hong Kongers, guaranteed to them until at least 2047. Democratic governments must take concerted actions on multilateral platforms to halt China’s human rights travesties.