May 22, 2020       Comments Off on China: Reverse Decision to Impose National Security Law on Hong Kong 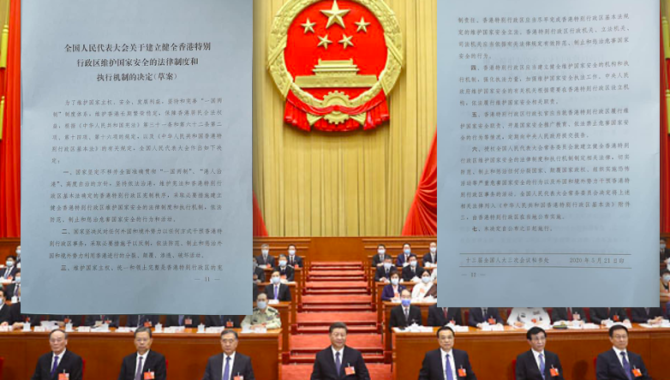 (Chinese Human Rights Defenders —May 22, 2020) The Chinese government must reverse its decision to impose a national security law on Hong Kong. This is a dangerous move. China’s national security legislation systematically punishes peaceful protests and free expression in mainland China. Imposing a Chinese Communist Party-drafted national security law in Hong Kong would mean stripping away any remaining human rights and fundamental freedoms of Hong Kong residents. It would erase any existing political separation between the semi-democratic territory and the one-party authoritarian mainland China. By taking this step, Beijing is side-stepping Article 23 of the Basic Law, which stipulates that Hong Kong shall “enact laws on its own” to address national security. Beijing has effectively announced it is no longer bound by the treaty-based “one country, two system,” which is supposed to be in effect for another 27 years.

Late in the evening of May 21, Beijing announced that the National People’s Congress (NPC) would introduce a “Draft Decision on the Establishment and Improvement of the Legal System and Implementation Mechanism for the Safeguarding of National Security in the Hong Kong Special Administrative Region” (关于建立健全香港特别行政区维护国家安全的法律制度和执行机制的决定（草案）) during the annual NPC session opening on May 22. Upon adoption, the decision would grant the NPC Standing Committee the authority to draft a national security law for Hong Kong. The decision would also allow the Central Government’s national security agencies to operate in Hong Kong.

The NPC-drafted national security law would be inserted into Annex III of the Basic Law. The law would then be either directly promulgated or applied in Hong Kong through local legislation. The law could be drafted and passed by China’s rubber-stamp congress, which passes anything the Chinese Communist Party puts in front of it, as early as June-July.

What conduct constitutes a threat to national security is vaguely defined in Chinese legislation. This permitted Chinese police and courts to arbitrarily use “endangering national security” crimes, in 2019 alone, to punish activities such as NGO advocacy against discrimination, writing essays critical of the government or commemorating the 30th anniversary of Tiananmen Massacre, defending clients in court, and documenting human rights violations. Armed with national security legislation, authorities have targeted civil society groups with perceived or actual ties to international civil society organisations, including receiving overseas funding or organizing joint activities with international NGOs. Authorities have prosecuted individuals for using overseas website servers or giving interviews to foreign media as “providing state secrets to foreign entities.”

In 2015, China enacted a National Security Law with an overly broad and vague definition of “national security.” The UN High Commissioner for Human Rights denounced the law since “it leaves the door wide open to further restrictions of the rights and freedoms of Chinese citizens.”

Crimes in the category of “endangering national security” under China’s Criminal Law, including such crimes as “subversion” and “inciting subversion,” “separatism,” “inciting separatism,” and terrorism and state secrets-related offences. These crimes have been regularly used to prosecute rights activists, political dissidents, those defending religious and ethnic minority rights in Tibet and Xinjiang, and journalists reporting on or exposing rights violations. Chinese police cite “endangering national security” to deny detainees’ access to their lawyers or disappear them into the “residential surveillance at a designated location” system. Activists, lawyers, and their children and spouses have been banned from travelling overseas on the grounds it may “endanger national security.”

Some emblematic cases of the abusive nature of China’s use of “national security” include:

In 2019, the UN Working Group on Arbitrary Detention found all the detentions of Chinese charged with “inciting subversion” and “subversion” it examined to be arbitrary. The Working Group wrote in November 2019 that the crime “could be used to deprive individuals of their liberty without a specific legal basis and violate the due process of law guaranteed…[in] the Universal Declaration of Human Rights.” It also warned the Chinese government that systematic use of arbitrary detention may constitute a crime against humanity.

The Chinese government, in bypassing Hong Kong’s legislative process, is forcing upon Hong Kong a draconian legal regime. This could strip Hong Kong residents of their rights to freedom of expression, assembly, and association, in violation of the city’s mini constitution and international human rights law. Hong Kong’s Basic Law guarantees Hong Kong residents the right to free speech, a free press, freedom of association, and assembly and the right to be free from arbitrary arrest. The International Covenant on Civil and Political Rights applies to Hong Kong under Article 29 of the Basic Law. Any national security legislation enacted by Beijing and imposed on Hong Kong would practically upend these human rights guarantees.

Under a Beijing-imposed national security law, Hong Kong pro-democracy legislators could face persecution for “sedition” or “subversion” by challenging Beijing or the Chinese Communist Party (CCP). Attempts to form genuine political opposition in China, such as the China Democracy Party, has led to criminal convictions on charges of “subversion of state power.” Speech on social media could be criminalised and Hong Kong residents could potentially be imprisoned for criticising the CCP, Hong Kong or Beijing governments, or the Hong Kong Police Force. Protestors could face “terrorism” charges. Hong Kong journalists could find themselves accused of national security crimes for independent reporting.

In recent weeks, Hong Kong and Beijing authorities have taken advantage of the COVID-19 pandemic to infringe upon the rights of Hong Kong residents and the human rights situation in Hong Kong has deteriorated.