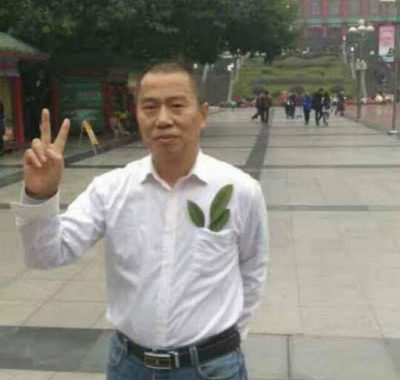 Chongqing police forcibly disappeared activist Xue Renyi (薛仁义), the founder and head of the environmental group Green Leaf Action (绿叶行动), on May 1, 2018. They also raided his home. Authorities disappeared Xue and other activists who had demonstrated on May 1, International Labor Day, after online calls urged Chinese citizens to demand rights protections in “National Resonance” (全民共振) rallies.Police seized Xue, who has gone by the screen name Renli (人力), in Jiefangbei Square in Chongqing, where he had been taking photographs while carrying green leaves in his shirt pocket. The calls for May 1 demonstrations, which originated in the mainland and were then promoted by overseas Chinese activists, put China’s authorities on high alert, leading to widespread detentions and other forms of restricted movement.

Others seized on the same day as Xue were soon released, but police warned them not to speak out online or do interviews with foreign media. On May 7, 2018 police reportedly told Xue’s family that he was in custody and being investigated by the Dianjiang County Public Security Bureau, but they also told the family that they should not try to locate him. Police eventually formally placed Xue under criminal detention on July 31, 2018.

Officials at the county detention center falsely denied for over eight months that Xue was being held there. Police harassed and intimidated his girlfriend, activist Zhao Anxiu (赵安秀), who advocated for Xue by trying to verify both his whereabouts and the legal basis for his detention. On May 15, 2018, police from Baqiao Police Station in Dianjiang took Zhao in for questioning related to Xie. The interrogation, for which police reportedly refused to produce a written summons, lasted over 20 hours, with Zhao released in the late morning of May 16. Zhao said she was mistreated while being questioned; her legs were shackled, she was slapped in the face, and she was not allowed to eat, rest, or use the toilet. An officer told Zhao that Xue was being held on suspicion of “picking quarrels and provoking trouble,” but she was not given police documentation to confirm this. Relenting to her request for any evidence of Xue’s criminal wrongdoing, officers gave her some materials but reportedly took them back—and also took her cellphone—before police escorted her home. In early September 2018, police began restricting Zhao’s movement for a period of time, first forcibly returning her from Beijing and then stationing guards to watch over her residence, with Zhao only able to go out in their company.

In January 2019, authorities finally acknowledged to Zhao that they were holding Xue Renyi at Dianjiang County Detention Center. At the time, Zhao indicated authorities claimed that Xue was getting treatment for diabetes, which he had prior to being detained. Zhao was able to deposit money for Xue at the center for the first time on January 9, 2018, meaning he may have been unable to purchase daily necessities during his first eight months in custody.

Xue Renyi’s detention illustrates the hazards of NGO work in China after the government’s adoption of lawson overseas NGOs and domestic charities. Authorities have apparently targeted him because Green Leaf Action had been campaigning for universal healthcare, social security, environmental protection, and food safety,which were once considered “non-sensitive” advocacy issues. Shortly before Xue was seized, police warned him that Green Leaf Action was being “controlled” and “manipulated” by “foreign forces,” and said that his group’s demands constitute “illegal activities.” The Law on the Management of Domestic Activities of Overseas NGOs reflects how the government has taken aim on the perceived threats of “foreign influences” and “national security,” which have led to escalated suppression against independent advocacy groups of all sorts in China.

Born in Chongqing on June 8, 1960, Xue Renyi worked at a state-owned enterprise and then in private business ventures before becoming an activist. Prior to starting Green Leaf Action in early 2016, Xue had been harassed by authorities for promoting environmental protection and for more general activism. He was taken in for police questioning in December 2016, and he was briefly detained in June 2017, after visiting detained environmental activist, Pan Bin (潘斌), who had taken part in advocacy work with Green Leaf Action.