May 3, 2018       Comments Off on China Must Release Detained Crane Workers on Strike & Would-Be May 1st Protesters 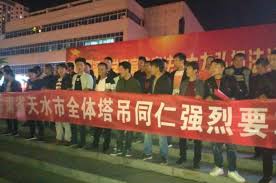 (Chinese Human Rights Defenders, May 3, 2018) – CHRD urges the Chinese government to end its suppression of citizens exercising their right to freedom of peaceful assembly, including workers who have recently gone on strike across the country. Prior to the May 1st International Labor Day, police intimidated and detained workers and other citizens who had planned nationwide strikes and protests. Based on information CHRD has confirmed, police suppressed crane operators from holding strikes in many Chinese cities, at which they were to demand higher pay and safety protections. Meanwhile, police also put many Chinese citizens under house arrest to prevent them from responding to online calls to hold countrywide, or “National Resonance” (全民共振), protests meant for citizens to push for rights protections on May 1. Authorities must release all those detained for exercising their human right to freedom of peaceful assembly and expression.

Under President Xi Jinping, China has aggressively promoted an alternative world order reflecting his vision of “human rights with Chinese characteristics.” In prioritizing “development” with no safeguards for human rights, rule of law, or social justice, the Chinese government has failed to protect socioeconomic rights, including rights to fair wages, workplace safety, and equal access by rural migrant laborers to housing and education for their children. Chinese citizens are being met with force and repression for trying to exercise civil and political rights to voice their grievances or criticize government policies that have deprived them of equal participation in economic development and a fair share of its benefits.

Suppression of May Day Strikes by Crane Operating Workers

Crane operators in China began organizing a strike through social media in late April, disseminating information in a WeChat group called “Crane Operators’ Union,” where a petition was posted calling for a national strike on International Labor Day to demand better safety protection and higher pay. Crane operators, toiling at a job with a high risk of injury, make a monthly salary as low as 4,000 RMB (approx. $611 USD). Over the next few days, crane workers in as many as 30 cities in 19 provinces staged demonstrations by gathering and unfurling banners highlighting their demands, according to China Labour Bulletin. State media confirmed the strikes, and crane operators reportedly did not show up at work in many cities.

According to Wang Jiangsong, a scholar of labor movements, local governments took harsh and intimidating measures to prevent and forbid the crane operators from staging the strikes. Mr. Wang lauded the planned strikes as “unprecedented” in the recent history of labor mobilization in China, as laborers in the same field of work were organizing to strike in coordination across provinces and cities.  Chinese police took quick action to interrogate and intimidate the workers, while censors deleted online posts in order to prevent any national strike from taking place. On May 1, police all over the country mobilized to try to stop any strikes from taking place. In Zhengzhou, Henan, police reportedly detained more than 20 demonstrators, and several workers were said to be detained in Chongqing. At least two companies reportedly agreed to meet the workers’ partial demands and promised to raise salaries. (It is unclear whether the detained workers have been released as the time of writing.) Zhuhai City government officials met with workers’ representatives at a hearing on April 28 and promised to respond to their demands.

Wary of mass protests by Chinese citizens breaking out, authorities also reacted swiftly to online calls urging people to take to the streets on May 1 to demand rights protections in “National Resonance” (全民共振) demonstrations. The online calls for “National Resonance” originated from activists inside China and were then promoted by overseas Chinese activists. The messages encouraged citizens to rally at public squares, train stations, or any other public spaces, making their voices heard and demanding government officials to address their concerns and grievances. After the calls went out in April, police across China questioned and harassed dozens, and perhaps hundreds, of activists, warned them not to participate, and put some under house arrest.

In late April, during this heightened period of surveillance, police detained two Chinese activists, apparently for planning to hold demonstrations on May 1, although they had followed lawful procedures to apply for police permission to protest. In one case, police in Guangdong took away Dr. Zhang Weichu (张唯楚), a gynaecologist, on April 24, after she submitted an application to hold a protest. Zhang (aka Zhang Qimao, 张七毛) has faced harassment from police for speaking out about her older brother, Zhang Liumao (张六毛), who died in detention in 2015. Guangzhou police seized Zhang after she filed the application with the provincial public security bureau. She reportedly is serving an administrative detention at Panyu District Detention Center in Guangzhou.

In another case, police in Nanjing took activist Wang Jian (王健) into custody on April 17 and criminally detained him the next day for “picking quarrels and provoking trouble.” Mr. Wang had just submitted an application to hold a demonstration “against a US-China trade war,” a theme which he had thought more likely would get him police permission to protest. Wang was reportedly moved to “residential surveillance at a designated location” (RSDL), a de-facto form of enforced disappearance, on April 19, though he is not suspected of any offense such as an “endangering state security” crime, under which Chinese law permits holding him outside a detention facility.

Detaining citizens for merely seeking legal permits to stage demonstration suggests an unusually high degree of police alert over public gatherings to express dissent or discontent. As authorities under President Xi Jinping have increasingly closed off the limited space in China for free expression and assembly, citizens are vulnerable to retaliation even for seeking official permission to peacefully voice their concerns in public. In the cases of Zhang and Wang, police took persecution a step further, by criminalizing them for trying to operate within China’s legal framework.

While peaceful assemblies in China are nominally protected under the Constitution, citizens are essentially banned from organizing or holding any demonstration under the Law on Assemblies, Processions and Demonstrations. This law requires citizens to obtain a permit from police and prohibits demonstrations that challenge the CCP or criticize any government policies or those, in official parlance, that “directly endanger public security or seriously undermine public order” (Article 12). Authorities have strictly enforced this law by categorically rejecting any applications made by citizens without government approval to hold public gatherings.

In other cities, police recently took “preventative” measures to stop activists from protesting as part of the “National Resonance” on May 1. In Shanghai, police telephoned or summoned activists in the city and ordered them to “stay home,” “not forward the online calls,” and “not join protests.” Policemen stood guard and blocked two activists Yin Huimin (尹慧敏) and Wan Wenying (万文英) from leaving their homes. Two other activists are out of contact after being taken away by police. In Liaoning, officials forcibly returned activist Jiang Jiawen (姜家文) from Beijing. According to CHRD sources, police were deployed in large numbers in many cities on May 1 to pre-emptively seal off public spaces and to be ready to disrupt demonstrations and detain participants.

Under Xi Jinping, the government has legislated tighter measures to target organizing or holding public assemblies, penalizing individuals who are not even physically present at demonstrations or who only express opinions online. A 2015 amendment to China’s Criminal Law stipulates that those who “organize” or “provide funding” for demonstrations, even if they do not attend them, can be sent to prison for up to three years (Article 290). In a move against free expression that essentially redefined the meaning of “public gathering” in Chinese law, a judicial interpretation issued in 2013 by the Supreme People’s Court and Supreme People’s Procuratorate expanded the scope of the crime “picking quarrels and provoking trouble” (Article 293 (4)) so that “cyberspace” is now considered “public space.” With this change, online expression has become punishable as allegedly “disrupting the order of a public place.”

In 2017, police responded to small-scale public gatherings to pay respects to Liu Xiaobo (刘晓波) after his death in July by detaining mourners after they attended seaside memorials. Near Guangzhou, police in Jiangmen City took 11 people into custody for approximately 30 days before releasing them on bail and putting them under tight police surveillance. One participant, Huang Yongxiang (黄永祥), was again detained, on April 25, 2018, in Zhuhai City on suspicion of “inciting subversion of state power.” Huang’s current detention appears tied to activist Zhen Jianghua (甄江华), who had joined protests outside trials of human rights lawyers or in front of detention centers in support of detainees before he himself was taken into custody in September 2017. Zhen was formally arrested in March on charges of “inciting subversion” after being disappeared in RSDL for six months.

The Chinese government must respect the human rights and fundamental freedoms of Chinese citizens, end its suppression of peaceful assembly, and provide safe outlets for free public expression of discontent by members of disadvantaged socioeconomic groups who have suffered due to rapid development and social dislocation, and by those who advocate for their rights. The government should repeal legislation and reform Chinese laws and the legal system to fully comply with the International Covenant on Civil and Political Rights, which China signed in 1998 but has not yet ratified. Xi’s promised “win-win cooperation” for China and the world should not rest on a false stability maintained by suppression of Chinese citizens who try to peacefully gather and express their concerns about government policies that negatively affect their lives.