May 20, 2022       Comments Off on UN High Commissioner Must Speak Up on Her China Visit for Los Desaparecidos 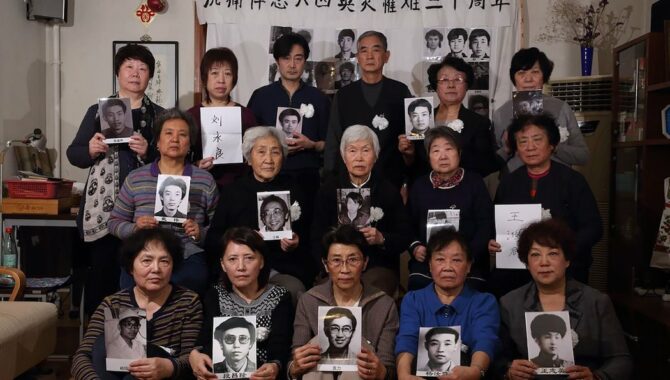 Your trip occurs on the eve of the 33rd anniversary of the 1989 Tiananmen Massacre, an act of horrific state violence against peaceful protestors, for which there has been no accountability, and which the Chinese Communist Party–– through censorship, threats, and jail–– is determined to bury, in an ongoing campaign of “enforced amnesia.”

CHRD and Dialogue China urge you to bring up the issue of zero accountability for the June 4th Tiananmen Massacre with Chinese authorities on your brief visit to China.

[Photo: Tiananmen Mothers in 2019, before the COVID-19 pandemic]

We ask you to inquire about the fate of the Tiananmen Mothers, a group of the victims’ mothers and relatives, formed shortly after June 4, 1989, who are China’s analog to the inspiring women, the Mothers (and grandmothers) of Plaza de Mayo in Argentina, seeking accountability for the “disappearance” of their sons and daughters by the military in the 1970s.

Both groups tirelessly demanded truth, accountability, and justice for those “disappeared,” killed, tortured at the hands of brutal dictatorships for many years and have endured ongoing state harassment and suppression for their brave efforts.

Many civil society organizations and human rights advocates have voiced grave concerns about the timing and strategic vulnerability of your visit. Your visit at this particular juncture of time will be carefully managed and choreographed by the Chinese government so that you will see and hear only what the government wants you to see and hear.  We are concerned that the OHCHR-prepared report on the human rights situation in the XUAR will be further delayed since any fact-finding investigation on your trip has been ruled out by the Chinese government, that you will have no unhindered access to the victims, eyewitnesses, independent members of civil society, and that your voices will be silenced and your views distorted by the Chinese government if and when you speak up about the lack of meaningful and unfettered access.

To counter manipulation and whitewashing the Chinese government’s brutal human rights atrocities, to prevent any further erosion of the reputation and credibility of your office, you must speak up for the families and friends of los desaparecidos –– the disappeared and missing in the Uyghur, Tibetan regions, in Hong Kong, and on Mainland China.

We urge you to show the Tiananmen Mothers that you stand with them and their “missing” children on your trip. While the UN Human Rights Council’s Complaint Procedure has declined to look into a complaint, filled by a group of victims and survivors of the massacre, who led or joined the 1989 pro-democracy movement, accusing the Chinese government of committing crimes against humanity during the 1989 massacre and engaging in a consistent pattern of gross human rights violations by continuing to suppress those who try to remember, we appeal to you, the UN’s highest official with the mandate to protect human rights, to demand your interlocutors in the Chinese government about the health and well-being of Ding Zilin, a retired university professor now 85 years old, who was one of the founders of Tiananmen Mothers and its de facto leader. Known as an “advocate for the dead,” Professor Ding has been barred from publicly, or even privately, mourning for her son, Jiang Jielian, who at age 17, was one of the thousands of protesters killed by the Chinese military on the night of June 3, 1989.

The surviving Tiananmen Mothers (and fathers, wives, siblings) have for more than three decades persisted in asking that the killings of their loved ones be investigated and for those responsible to be held accountable. Chinese authorities have not only denied them the right to seek justice, but also have extralegally detained some of them and closely surveilled and penalized them. The aging Tiananmen Mothers in China are running out of time to seek justice for their own “desaparecidos.”

The Chinese authorities have systematically suppressed calls for accountability, and censored information about their brutal crackdown on the nationwide 1989 democracy movement on the internet, in the media, and in history books.

The preciously rare spaces where the 1989 victims have been remembered outside mainland China are disappearing. Over the last few years, authorities in Hong Kong have cracked down on those gathering to remember victims and speak out for the truth. Every year since 1989, between 100,000-200,000 people had gathered in Hong Kong’s Victoria Park to light candles and pay tribute to victims and families, committed to remembering the massacre and the movement’s ideals, as well as honoring the Tiananmen Mothers.

Your visit to China comes at a time when it is no longer possible for people to openly remember and commemorate the victims of the Tiananmen Massacre in Hong Kong or the mainland.  Hong Kong authorities have forced the organizers of the annual gathering, the Hong Kong Alliance in Support for Patriotic Democratic Movements of China, to disband and subjected them to a “national security” investigation, charging some members with acting as “foreign agents.” The group’s key leaders are in detention but have courageously refused to comply with requests for information about participants. The Hong Kong government has also raided and closed down the Tiananmen Museum in Hong Kong, and pressured the University of Hong Kong to take down its “Pillar of Shame,” a sculpture paying tribute to the June 4th victims.

According to media reports, you have sought “meaningful access” for your visit, and to “gain a clear understanding of the human rights situation in the country and engage in discussions on relevant issues with a wide range of stakeholders, including senior Government officials and civil society.”  But the Chinese government has publicly declared that your visit must be on “friendly terms” to “promote exchange and cooperation.” The Xinjiang Uyghur Autonomous Region’s highest-ranking official has said that UN and diplomatic visits like yours are part of the Chinese Communist Party’s efforts to engage in “external struggle.” The Chinese government sees your visit as a propaganda tool to provide itself some badly needed moral legitimacy at a time of domestic public discontent over its “zero COVID” strict lockdowns and international criticism over its refusal to condemn Russia’s invasion of Ukraine.

One way to reassure us of the ability and determination of your office to fulfill its important mandate is that you publicly remember the los desaparecidos of China.

Add the Tiananmen Mothers to your list of concerns to raise, and be a voice for them, their children, and those who have kept their memories alive at great cost to their own liberty and livelihoods.