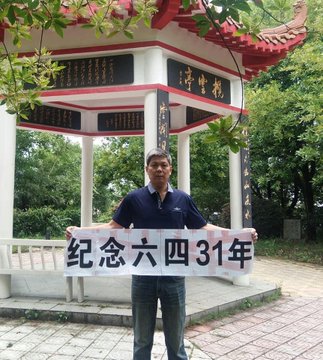 Yichang City national security officers took activist Liu Jiacai (刘家财) from his temporary residence on June 3, reportedly for “forced travel” ahead of the June Fourth anniversary, according to his wife. His whereabouts are currently unknown. After disappearing into police custody, Liu’s Twitter page appeared to have been wiped off its recent content. Liu Jiacai served a five-year prison sentence from 2013-2018 on “inciting subversion” charges for writing about and organising discussions about human rights problems in China.

Update: Police released Liu Jiacai and he returned home in the morning of June 11

Qingyuan city police in Guangdong summoned activist Zhang Wuzhou (张五洲) for “disrupting public order” on June 5 for her act to commemorate the 31st anniversary of Tiananmen Massacre. The next day, police put her under criminal detention on suspicion of “picking quarrel and provoking trouble.” On June 4, Zhang held up a placard at the Baiyun Mountain in Guangzhou to commemorate the massacre and oppose the National Security Law being imposed on Hong Kong. She took photos and uploaded them to multiple WeChat groups. She is currently being held at Qingcheng District Detention Center in Qingyuan. Zhang had been released in February from a 16-month prison sentence in retaliation for her speaking out about witnessing Guangzhou lawyer Sun Shihua being assaulted and strip-searched by police in Hualin Police Station in September 2018. Her brother Zhang Liumao died in police custody in November 2015.

Hunan activist Chen Siming (陈思明) wrote an essay and posted photos online to commemorate the 31st anniversary of June Fourth. Police took him away and penalized him with a 15-day administrative detention. Qingyun police took Chen on a “forced travel” ahead of the anniversary and released him on the morning of June 5. Hours after his release, he published his essay and photos on Twitter. Qingyun police promptly summoned him and then put him under administrative detention the next day. Chen has previously been detained and forced to travel when he took actions to remember June Fourth around the anniversaries in the past few years.  He was also questioned over his support for the Hong Kong protests and for criticising the Chinese government’s response to the COVID-19 pandemic.

Activist Detained For 24-Hours, Subjected to Degrading Treatment in Connection to the Anniversary

Zhengzhou police detained activist Fang Yan (方言) for 24 hours at Nanyang Road Police Station and subjected her to degrading treatment. According to an account written by Fang, police arrived at her door on June 5 and said a delivery person had accused her of “slandering” after she had called the police reporting what she believed to be a scammer trying to swindle money from her. Zhengzhou police took her away and subjected her to a strip-search. Police pinned her in an interrogation chair known as “tiger bench” for hours and forced her to sign a confession before releasing her on June 6. In 2014, Fang had been criminally detained for two months for taking part in a memorial to mark the 25th anniversary of the June Fourth massacre, which may be why police targeted her and briefly detained and mistreated her, to intimidate her, during the sensitive period this year.

For more cases involving police silencing and intimidating Chinese activists around the 31st anniversary of June Fourth, see our briefing on the detention of Chen Yunfei and our Twitter feed @CHRDnet