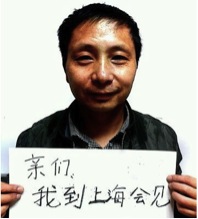 Crime: Creating a disturbance, using a cult to undermine implementation of law, and gathering a crowd to disrupt order of a public place

Wei Zhongping, born in 1963, is a petitioner-turned-activist from Jiangxi Province. He was detained in April 2013 after calling for the release of other activists arrested in a nationwide crackdown on freedom of assembly, association, and expression that began the previous month. Xinyu City authorities initially arrested Wei for “inciting subversion of state power,” but then changed the criminal charges. Wei, and fellow defendants Liu Ping (刘萍) and Li Sihua (李思华) were held in pre-trial detention longer than the three-month limit under Chinese Law after local authorities repeatedly delayed their trial. The court had to suspend the first trial held on October 28, after the defendants and lawyers protested against a number of legal violations. Thr trial resumed on December 3, but was also marred by similar violations, as a number of key witnesses and supporters of the defendants were put under house arrest or restricted in their movements in advance of the proceedings. The charge of “unlawful assembly” was unexpectedly changed to “creating a disturbance” just prior to sentencing.

Wei Zhongping began his advocacy on issues of workers’ rights. He ran as an independent candidate for his local People’s Congress in 2006, and also in 2011, along with Jiangxi activists Li Sihua and Liu Ping. In addition, he has been involved in promoting housing and land rights through assisting others in their rights-defense work. Prior to his arrest, Wei joined a public call for top officials to disclose their wealth, a campaign that played a role in triggering the crackdown from the spring of 2013.