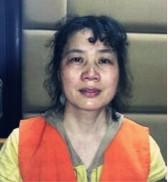 Crime: Creating a disturbance, using a cult to undermine implementation of law, and gathering a crowd to disrupt order of a public place

Liu Ping, a prominent Jiangxi-based activist and “New Citizens’ Movement” member, was detained in April 2013 as part of a nationwide crackdown on freedom of assembly, association, and expression that began in March of that year. Liu was initially arrested for “inciting subversion of state power,” but authorities later dropped that accusation and charged her with three other crimes. She was tried alongside Li Sihua (李思华) and Wei Zhongping (魏忠平).

During her prolonged pre-trial detention in Xinyu City Detention Center, Liu was reportedly physically assaulted and subjected to other forms of mistreatment, including deprived medical treatment for severe diarrhea that may have been caused by unsanitary conditions. Lawyers requested bail for Liu during her first trial in October 2013, but the trial was suspended. Her lawyer Si Weijiang (斯伟江) raised the issue of torture during her December 2013 trial, but the court refused to dismiss evidence or a confession that may have been extracted from torture. The court also refused to file a case to investigate the allegation of torture. Her family members have been put under soft detention and warned not to speak to media before her trial, and one of her lawyers, Zhang Xuezhong (张雪忠), suffered retaliation for taking on her case. The charge of “unlawful assembly” was unexpectedly changed to “picking quarrels and provoking trouble” just prior to sentencing.

Liu Ping was still recovering from surgery for an inflamed gallbladder and gallstones when she was detained in April 2013. She also suffers from rheumatoid arthritis. Police beat Liu in the days after they took her into custody, and she reported being choked and having her arms twisted painfully. Later, when Liu was interrogated in the detention center, police repeatedly shoved her head against metal bars, twisted her neck and arms, and also shackled her extensively. Liu’s lawyer reported in July 2013 that she had become very weak, having lost a great deal of weight while needing to force herself to eat and suffering daily bouts of diarrhea. Authorities had blocked Liu from accessing funds that supporters have sent to the detention center for her. She was even prevented from buying medicine to treat a severe bout of diarrhea. In August 2013, Liu who has suffered from a stomach illness, was reportedly still sick in detention. From April to August 2014, Liu was only allowed cold water to shower and cellmates were ordered not to speak to her.

Since Liu Ping was transferred to Nanchang City Women’s Prison in Jiangxi Province in August 2014, her health continued to deteriorate and she lost more weight, but prison authorities continued to refuse her treatment to improve her condition. At a prison visit in February 2015, Liu’s family learned that the activist had been given some pills, but she continued to suffer from chronic diarrhea, and authorities refused to provide her eyeglasses even though her eyesight was worsening. During a visit in April 2015, Liu Ping told her daughter she was given medicine after seeing a doctor, but it was not effective; after taking the medication, she still suffered from several bouts of diarrhea in one morning. When her daughter requested that prison authorities provide treatment for her mother’s chronic diarrhea, they denied that Liu suffers from any illness. Liu Ping also told her daughter during the April 2015 visit that she is not allowed to speak freely during meetings, leading her daughter to suspect that her mother is being mistreated. In June and July 2015, Liu Ping did not make the routine once-a-month phone call that was previously allowed (in accordance with Chinese law). When her family visited her on July 27, 2015, Liu’s family noticed she appeared very thin, tired, and sick. Her family fears deeply Liu Ping’s ongoing untreated illnesses will soon cause her health to worsen further, and possibly become life threatening. Ms. Liu has also been denied correspondence and a Bible that supporters had sent to her. In addition, her daughter reportedly has been treated differently from other visitors to the prison; officers confiscate her phone and are present to monitor every meeting she has with her mother.

Born in 1964, Liu began her activism in 2009 by fighting for labor rights. In 2011, she ran for a seat in the local People’s Congress and was held for several days before and during the election. Liu has been a frequent victim of arbitrary detention, and her family has suffered from retaliatory actions by local authorities. Before her current detention, Liu joined an anti-corruption campaign and demanded the Chinese government ratify the International Covenant on Civil and Political Rights. She was a member of the “New Citizens’ Movemenet,” loose group of activists that promotes social justice and political and legal reforms.