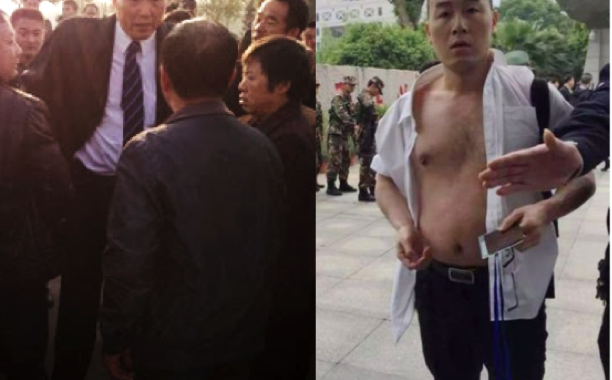 Since President Xi Jinping came to power in March 2013, there has been a surge in incidents of violent assaults against human rights lawyers in retaliation for their work defending clients in politically “sensitive” cases. CHRD has documented 23 incidents involving 32 lawyers in this time period. Some lawyers have been targeted multiple times, and a number of them are currently under detention due to the July crackdown on lawyers. Previous episodes of abuse against rights lawyers occurred in the mid-to-late 2000s, under then-President Hu Jintao.

In one of the most dramatic incidents related to the current crackdown, authorities have stifled an apparent escape attempt by the son of detained lawyers Wang Yu (王宇) and Bao Longjun (包龙军), a teenager who was trying to flee China via Myanmar. Men in Burmese police uniform were reportedly seen taking away 16-year-old Bao Zhuoxuan (包卓轩) and two Chinese activists in the city of Mong La on October 6. Chinese police appear to have been involved in the operation, as Bao has apparently been returned to China; he was reportedly seen with his grandmother at her home in Inner Mongolia, though nobody has been able to speak to the teenager as police are closely monitoring him and his relatives. The two activists who assisted him, Xing Qingxian (幸清贤) and Tang Zhishun (唐志顺), have since disappeared. It is unclear whether Burmese or Chinese police are holding the activists in custody, and their precise whereabouts are unknown. Both of their homes—in Chengdu and Beijing, respectively—have been searched by police. Xing’s mother-in-law was told his case involved illegal immigration, and members of Tang’s family were summoned for questioning on October 12. Both Tang and Xing are in possession of valid passports and tourist visas, and have health conditions which require daily medication.

Chinese authorities confiscated Bao Zhuoxuan’s passport when he was abducted on July 9 with his father at Beijing Capital International Airport, where he was to fly to Australia to study. From that day, the teenager was under house arrest and police monitoring, first in Tianjin and then in Hohhot. He said he went through “hell” during the first 48 hours under police control. He was threatened when he tried to ask for the return of his cellphone and passport, and police also warned him not to try to hire lawyers for his parents.

Physical violence by police or state-hired thugs has been a continuous tactic used against Chinese human rights lawyers, in violation of domestic and international law, including the Convention against Torture, which China ratified in 1988. Next month, the Chinese government will go before the Committee against Torture in a dialogue as a part of the fifth review of China’s implementation of the Convention. During the last review of China in 2008, the Committee identified harassment of lawyers and impunity for unaccountable “thugs” as two of three overarching obstacles to China’s effective implementation of the Convention. The wave of violence against lawyers, and including harassment and detention of their family members and associates, shows that the government has not taken any meaningful steps to fulfil its obligations under the Convention. The Chinese government has also failed to implement recommendations from the Universal Periodic Review at the Human Rights Council in 2013, which it claimed to “accept,” to end violence against lawyers. 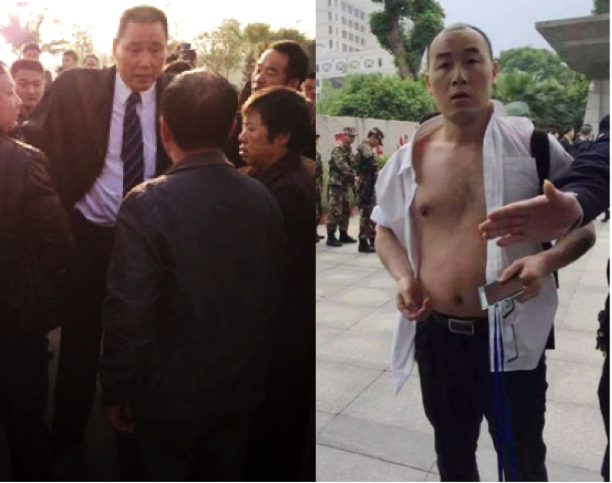 Lawyer Pu Zhiqiang (浦志强) (left) is surrounded by a gang that physically prevented him from entering a Jiangxi courtroom in 2013, and lawyer Liu Jinbin (刘金滨) (right) after being attacked outside a Hunan courthouse in 2015.

In the assaults on lawyers, types of torture and cruel, inhumane, and degrading treatment have included shackling during arbitrary detention, punching, kicking, verbal abuse, and threats. In some of the most violent incidents, attackers have wielded weapons, including knives and batons. Many lawyers have been left with serious physical injuries from assaults, not to mention psychological suffering.

In all the incidents of violence against lawyers that CHRD has documented, there has been no known criminal accountability for alleged perpetrators. In most cases, police did not respond to the scene of the assaults, much less file reports or investigate the abusive acts. Complaints filed to relevant authorities have been ignored. Several lawyers who have been attacked also have been accused of committing “crimes,” pointing to a disturbing trend that has emerged under Xi Jinping—the criminalization of human rights lawyers for defending their clients and challenging unlawful conduct by police and judicial officials. The perpetrators of violence act with impunity, making a mockery of the Xi government’s so-called commitment to “ruling the country with law.”

The mid-to-late 2000s saw several incidents of violence against rights lawyers during the term of President Hu Jintao. Some of the most egregious cases include the disappearance, torture and imprisonment of lawyer Gao Zhisheng (高智晟), starting in 2006; a violent attack in 2006 on Chen Guangcheng’s lawyer Li Fangping (李方平); the abduction and torture of lawyer Li Heping (李和平) in 2007; and the three-month abduction and torture of lawyer Teng Biao (滕彪) in 2011.

Violence against human rights lawyers is a measure of authorities’ desperation in the face of human rights lawyers’ growing numbers and strength. Lately, a number of young lawyers have increasingly taken on cases representing activists, members of officially banded religious groups, and ethnic minorities. They are boldly challenging widespread breaches of Chinese law by authorities at detention facilities, during police interrogation, and in the courtroom. Many of these lawyers have become organized in solidarity to push back against state harassment, under the name “China Human Rights Lawyers Group” (中国人权律师团), which grew from about 20 lawyers in 2013 to more than 200 by July 2015.

The lawyers’ emboldened actions appear to have led to a nationwide police crackdown on rights lawyers, which, beginning on July 9, has involved abductions, secret detentions, police interrogations, and raids on offices of law firms. Approximately 300 attorneys and activists have been summoned for questioning, and to date, and more than 20 remain held in secret locations. Many of the detainees face charges related to “national security,” which authorities have used to deny the lawyers access to their own legal counsel, putting them at great risk of torture and mistreatment. There has never been this many human rights lawyers in custody at any given point since such individuals emerged in China, in the early 2000s.

CHRD urges the international community to push the Chinese government to end violence against human rights lawyers by taking the following measures:

Click here to see an extensive list of attacks on human rights lawyers as documented by CHRD. The list is not exhaustive of all incidents of violence against such lawyers in China since March 2013, and will be updated when we have more verified information.