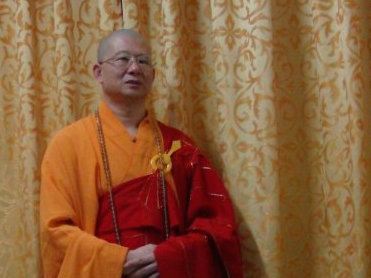 (Network of Chinese Human Rights Defenders – November 5, 2015) – CHRD finds a Chinese court’s sentence of the Buddhist leader Wu Zeheng (吴泽恒) to life in prison excessively harsh and grossly unjust. The verdict was announced in a closed-door hearing in Guangdong on October 30. The punishment targets a religious leader for his beliefs and peaceful activities, including protecting human rights, which date back to his time as a student leader in the 1989 pro-democracy movement.

The Zhuhai City Intermediate People’s Court sentenced Wu on charges related to the religious group’s alleged activities—“organizing or using an illegal cult to undermine implementation of the law” (12 years), “rape” (life), “fraud” (14 years), and “production and sale of harmful food” (6 years). Authorities also fined him 7.15 million yuan in connection to the last two charges. The scene outside the courthouse during the hearing was chaotic, with a heavy police presence and more than a dozen Buddhist practitioners briefly taken into custody.

Wu is the founder and head of the Buddhist-inspired Huazang Dharma group, which authorities tried to break up in the summer of 2014. Born in 1967, Wu, also known as Zen Master Xingwu (行武禅师), founded the Huazang Dharma group in the early 1990s. He gained thousands of followers inside China and overseas, leading to pressure from authorities. In 2000, a Beijing court sentenced him to 11 years in prison for “economic crimes” after he sent open letters to senior Chinese Communist Party leaders that criticized corruption within the Party and authorities’ infringements of citizens’ religious liberties. During his past imprisonment, Wu reported being subject to torture and other forms of mistreatment, including sleep deprivation, solitary confinement, and forced labor.

“Wu’s life sentence is an outrage. He is the victim of both religious suppression and political persecution,” said Renee Xia, CHRD’s international director. “This case further exemplifies the government’s ramping up of its assault against independent religious and spiritual groups whose growing influence is perceived as a threat.”

Buddhist leader Wu Zeheng (吴泽恒) has been sentenced to life in prison in a grossly unjust case of religious and political persecution. (image: Xinhua)

The court also sentenced three of Wu’s disciples—Ms. Meng Yue (孟越), Ms. Yuan Ming (袁明), and Mr. Zhao Weiping (赵卫平)—to between three and four years’ imprisonment for the alleged offenses of “fraud” and “organizing or using an illegal cult to undermine implementation of the law,” according to state media. A fourth individual, surnamed Liu (刘), received no criminal sentence after being convicted of “production and sale of harmful food.”

After his release from prison in 2010, Wu faced repeated harassment until authorities tried to break up the Huazang group last year. Starting on July 29, 2014, Guangdong police criminally detained Wu and 20 members of the group through a series of raids in Shenzhen, Zhuhai, and Shanghai. The detainees were accused of “fraud,” “rape,” and “organizing or using an illegal cult to undermine implementation of the law.” Even before the detainees were formally charged, China’s state media engaged in a sustained campaign to discredit the Buddhist organization, depicting it as an “evil cult” whose members were suspected of criminal acts.

Wu’s case highlights the wider religious suppression in China in the last few years, as seen in government policies and practices as well as individual cases. Authorities have long used criminal charges related to “illegal cults” to clamp down on Falun Gong practitioners and underground house churches, and such persecution has only intensified since President Xi Jinping became president in March 2013. Since then, officials in Zhejiang Province—a place known as a hotbed of Christianity in China—have ordered both state and non-sanctioned Christian churches to take down crosses, and overseen the demolition of church buildings and the punishment of religious practitioners. In addition, authorities have recently introduced new regulations in the Xinjiang Uyghur Autonomous Region to restrict the practice of Islam.

In other cases of persecution tied to religious communities, Christian pastor Zhang Shaojie (张少杰) of Henan Province, who was initially detained in 2013, is serving 12 years in prison after helping residents of Nanle County defend their land rights against local officials. In addition, police detained lawyer Zhang Kai (张凯) this past August after he went to Zhejiang to provide legal representation to detained Christians who had resisted official orders to remove crosses from churches. Zhang was put under residential surveillance at a secret location on trumped-up charges of “endangering national security” and “gathering a crowd to disrupt social order.”

Besides facing persecution for his religious practice, Wu Zeheng also belongs to a long line of Tiananmen-era activists who have been subjected to constant government repression ever since the violent crackdown on the pro-democracy movement in June 1989. CHRD has confirmed that at least 21 other individuals who participated in or vocally supported the movement are now imprisoned or detained for their post-1989 activities, including dissident journalist Gao Yu (高瑜), rights defense lawyer Pu Zhiqiang (浦志强), and activist Guo Feixiong (郭飞雄).