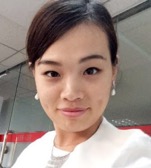 Li Shuyun, a trainee lawyer with Beijing Fengrui Law Firm, has been arrested in the crackdown on human rights lawyers in China, with her law firm the main focus of investigation. Tianjin Municipality Public Security Bureau (PSB) officers initially seized her from her home on July 10, 2015, and took away a computer and hard disk. They claimed they were working with Beijing police and that they were investigating a “criminal case.” She was forcibly disappeared in the months prior to her arrest. On January 12, 2016, Li’s lawyer, Lu Zhimin (陆智敏), was informed by a guard at Tianjin No. 1 Detention Center that his request to visit her was denied because she had engaged a new lawyer. Her father later released an open letter asking the new lawyer to contact them. Li reportedly worked as an assistant with Fengrui Law Firm’s director Zhou Shifeng (周世锋), who was also arrested in January 2016.

She was released on “bail pending further investigation” on April 8, 2016. Following her release on bail, Li was too afraid to speak out and her supporters couldn’t contact her. Authorities eventually dropped the criminal case against her on April 7, 2017. She reportedly is considering going back to university, as she is too afraid to continue as a trainee in a law firm. On May 14, 2017, Li posted her first public account of conditions in detention, allegeding that authorities tortured her. She reported being forced to stand for 16 hours a day, being forced to taken an unknown medication for months, sit for extended periods on a stool, and shared the same room as death penalty suspects.

Born 1991, Li Shuyun graduated from Henan University of Science and Technology before going on to work for Beijing Fengrui Law Firm. She had not yet obtained her lawyer’s license before her detention.