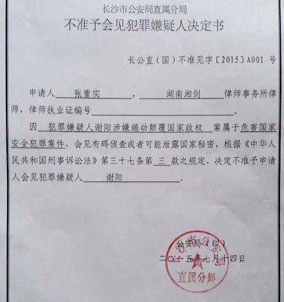 An important deadline has passed in the continued detentions of lawyers and activists seized during the July crackdown. The 37-day maximum allowed for criminal detention—beyond which a criminal suspect has to be formally arrested or released under Chinese law—has passed for the seven individuals criminally detained between July 8-14. Police still hold in custody 22 lawyers and activists; of these, 15 are under criminal detention or “residential surveillance at a fixed location” in Beijing, Tianjin, Guangxi, Guangdong, Henan, or Hunan, but police have not notified families of their exact locations. Seven others have disappeared into police custody, with all but one of them detained in secret for more than a month. Only one individual was released after 37 days of criminal detention, and no individual seized in the crackdown is known to have been formally arrested. Police can hold individuals in residential surveillance for up to six months.

In all, more than 300 individuals were summoned and interrogated in mid-July, and most were later released, though some have not spoken publicly about their situation. Police raided the offices of three law firms in Beijing, and detained many of the lawyers and staff from Fengrui Law Firm, which has often handled “sensitive” rights defense cases. Authorities have denied detainees’ legally protected rights by taking them into custody without a warrant, not informing families of individuals’ detention status or whereabouts, and denying or limiting access to legal counsel. Authorities have denied lawyers’ requests to visit at least nine individuals who are under criminal detention or residential surveillance, citing that they are being held on suspicion of a “endangering national security” crime; specifically, seven of the nine are known to be held for “inciting subversion of state power.” The rationale for claiming “national security” concerns in the lawyers’ cases appears to be a pretext for abridging the detainees’ right to legal counsel. Families fear that denying lawyers’ visit, or enforced disappearance, may have been used to hide torture of the detainees to coerce confessions.

The large-scale police operation in July is an extension of President Xi Jinping’s escalating crackdown on the country’s growing human rights defense movement. The Xi government’s zero-tolerance of dissent and civil society is now being aggressively codified into the newly enacted or proposed draft laws as well as draft amendments to the Criminal Law.  For example, China’s new National Security Law, which was enacted in July, will legalize the systematic suppression of political, ethnic, and religious dissent. If the draft laws take effect as written, they would provide legal rationale for criminalizing Chinese citizens for  criticizing government policies, strengthening Internet control, and cutting off support for NGOs. Possible changes to the Criminal Law are of particular concern to the legal community, as the proposed amendments may in effect criminalize the speech of lawyers when they defend clients’ rights at trial, an “offense” punishable by up to three years in prison. The expanded police power provided in the national security law can already be felt in the current crackdown on lawyers.

7 Criminally Detained Beyond Legal Limit, Some in Unknown Locations

Seven lawyers or legal assistants listed below remain criminally detained, and all of their detentions have passed the 37-day mark. Three of them are still detained in secret locations. So far, the only person who has been released from criminal detention is Liaoning activist Jiang Jianjun (姜建军), who was criminally detained on July 10 and let go on August 18 from Dalian City Detention Center. Those held in Tianjin had been taken there from Beijing for un-explained reasons.

The eight individuals below are being held under “residential surveillance at a designated location,” a compulsory criminal measure outlined in Article 73 of the Criminal Procedure Law, where a suspect can be detained away from home for up to six months. Their exact locations remain unknown.

In addition, the seven individuals below have disappeared after being seized by police. All but one was taken away from their home or office between July 10 and 12.

Police threatened some of the 300-plus lawyers and activists summoned for questions with disbarment or criminal detention, and warned them not to speak publicly about being interrogated or to support detained lawyers and activists. Lawyer Yu Wensheng (余文生) faced retaliation—detention and interrogation for one day—after he filed a lawsuit against the Ministry of Public Security over the illegal handling of detained lawyers. Family members of detained lawyers have also been targeted, in particular the wife and brother of Li Heping and Wang Yu’s teenage son, who have been detained or put under house arrest, interrogated, and threatened against speaking publically on their cases.

The current crackdown is particularly alarming as it has targeted lawyers and authorities conducted themselves with complete disregard to the legal rights provided in China’s own law. State media reports on the detained lawyers was, in many instances, the first time families learned of their loved ones’ status after they went missing, and have yet to receive police notice of detention. Authorities have flouted many legal provisions outright, or used legal loopholes related to national security to deny due process rights. As most individuals have not been able to receive a visit from their lawyer, it is unknown if they have been tortured or mistreated in detention, which is likely due to China’s systemic problem with torture. A list of some of the known violations includes:

In addition, Chinese authorities have contravened international human rights conventions and treaties that the Chinese government has signed or ratified, violating the human rights of those swept up in the crackdown. These include the right to be free from arbitrary detention, enforced disappearance, and torture, freedom of expression, assembly and association, due process rights, including the right to be presumed innocent until conviction through fair trial by an independent court, and the right of lawyers to work in just and favourable conditions. Chinese authorities have used national security measures to supress human rights, in contravention of a 2013 resolution by the UN Human Rights Council—a body where China holds a membership seat —urging states to stop targeting civil society in the name of counter-terrorism and national security. (UN HRC 27/31).

CHRD reiterates a call on the Chinese government to unconditionally release all detained lawyers and others swept up in the crackdown; to end its reprisals against human rights lawyers for exercising their independence; and to bring its new legislation into complete compliance with international human rights standards.