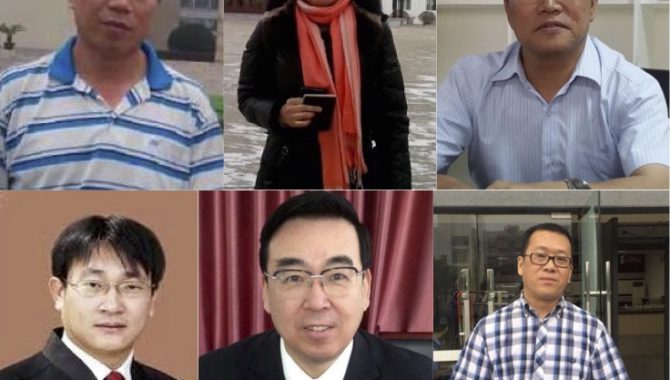 (Network of Chinese Human Rights Defenders, July 13, 2015) – Massive police operations across China starting July 9, coordinated by the Ministry of Public Security, are a serious affront to civil liberties. The deteriorating human rights conditions in China under President Xi Jinping have now reached a point of crisis. The raids, involving abductions, detentions, disappearances, summons, and searches, have affected more than 100 lawyers and activists, with the number still growing as of the time of this report. To date, 6 have been put under criminal detention, 3 are being held under residential surveillance in undisclosed locations, at least 11 were taken into police custody and disappeared, and more than 100 have been questioned by police and released. CHRD condemns the Chinese government’s assault on human rights lawyers as “national security” threats, as claimed in state media, and demands the immediate and unconditional release of all individuals who are detained so far. CHRD is concerned that those who have disappeared into police custody are likely to be subjected to torture.

The large-scale operation began soon after China’s draconian National Security Law took effect – on July 1, and one day after China angrily denounced the UN High Commissioner for Human Rights as “unprofessional” following his criticism of the law. The High Commissioner described the law as “extraordinarily broad,” and said that “coupled with the vagueness of its terminology and definitions,” it “leaves the door wide open” for further restrictions on human rights and civil society in China. The concerted raids demonstrate how the new law can be put to use to legitimize and embolden massive countrywide security operations against any perceived threats to the government.

The coordinated police operations also demonstrate how authorities can put to use China’s draft Internet Security Law, which would legalize invasive and strict cyber-policing and authorize shutting off the Internet to entire regions for “security” purposes. Social media sites favored by rights activists and lawyers have been disrupted following the raids, with users inside China generally experiencing difficulties in logging into their accounts, according to reports gathered online. In the same article (linked above) from the state media Xinhua agency detailing the operations and discrediting the lawyers, police pointed to one particular social media service, Telegram, as the platform that lawyers and activists have been using to “plot” and “organize” “criminal activities.” Many of the released lawyers and activists have indicated that that they were warned against posting messages online about the raids. The day the raid began, a massive DDOS (distributed denial of service) attack began on Telegram’s Asia-Pacific server, coordinated from East Asia. While it is unclear who is behind the attack, the timing of the DDOS attack and the police raids may prove not a mere coincidence.

The police operations have focused on the Beijing Fengrui Law Firm, with the abduction and detention of the director, several of its lawyers, paralegals, and administrative staff. The July 11 Xinhua article accused the firm of running a “criminal syndicate,” serving as “a platform for masterminding serious illegal activities to incite “social disorder” and gain “profits.” Xinhua cited the Ministry of Public Security to confirm the criminal detentions of six lawyers and staff at the Fengrui Law Firm, including the director of the firm, Zhou Shifeng (周世锋), lawyers Wang Yu (王宇), Wang Quanzhang (王全璋), Huang Liqun (黄力群), assistant Liu Sixin (刘四新), and lawyer Bao Longjun (包龙军), and also referred to “many others” as criminally detained without naming them.

The unnamed “many” include prominent lawyers Li Shuyun (李姝云), Li Heping (李和平), Sui Muqing (隋牧青), Xie Yang (谢阳), Gou Hongguo (沟洪国, aka Ge Ping, 戈平), and Zheng Enchong (郑恩宠). The nature of the detentions and locations of these lawyers are currently unknown or unconfirmed. Li Heping was taken away on July 10, when his home and firm in Beijing were also searched. Sui Muqing in Guangzhou, Xie Yang in Hunan, and Guo Hongguo in Tianjin have been put under “residential surveillance” in unknown police-designated locations. Disbarred Shanghai lawyer Zheng Enchong had his home searched on July 11 and was taken away. Liu Xiaoyuan (刘晓原), a senior partner at Fengrui Law Firm, disappeared for three days and has been threatened with disbarment. Unless police notify the families within 24 hours of the whereabouts of these lawyers, and allow their own attorneys to visit, both of which are required by laws, these lawyers are considered to have been “disappeared.”

From information disclosed by released lawyers and activists so far, it has become clear that the aim of the mass raid was to intimidate the lawyers into silence and force them to withdraw their support to lawyer Wang Yu and her law firm, Beijing Fengrui. Many of the detained or questioned lawyers signed an open letter to protest Wang Yu’s disappearance. Police seemed to have use the list of signatures as their “guide” to hunt down the lawyers and tried to intimidate them into submission.

Violations of Procedural and Legal Rights

Legal rights and procedural rights of the detained or disappeared lawyers have been trampled on by unrestrained police power. The operations have so far been conducted in a manner more commonly used against violent criminal gangs, including using early morning break-ins, abductions, hoods to cover heads of those taken into custody, massive police presence, and state media smear campaigns to heighten the level of the seriousness of the “crimes” that the lawyers are accused of, with no presumption of innocence.

The Ministry of Public Security, according to Xinhua article, apparently ordered the raids to retaliate against the rights lawyers for their increasingly organized network. Police accused Fengrui law firm’s director, Zhou Shifeng, of running a “criminal syndicate” with the lawyers and others at the firm that coordinated with those in the “rights defense circles,” including lawyers, bloggers and other netizens, and petitioners, and that they masterminded more than 40 “sensitive incidents” since 2012. This included hiring the maverick activist Wu Gan (吴淦), who was formally arrested in early July on charges of “inciting subversion” and “creating a disturbance,” as a special advisor.

What the Ministry of Public Security, according to the article, listed as “sensitive incidents” include recent advocacy campaigns when Chinese netizens and civil society activists and lawyers spoke out, criticized, or in some cases, gathered to protest official obstruction of justice or government impunity to suspects of rights abuses. These include the “Qing’an Incident,” when a policeman shot a petitioner to death at a train station in Heilongjiang Province in early May, with the official narrative widely questioned by the public. Wu Gan was one of the most outspoken critics of the government’s handling of the case. Another “sensitive incident,” according to the Xinhua article, is the “Jiansanjiang incident” where four lawyers were detained and tortured in 2014 after they insisted on meeting their clients (Falun Gong practitioners) detained at a “black jail.”

In specific terms, the recent raid is likely intended as a stern warning to China’s embattled but increasingly unified human rights lawyers and activists. At the same time, the mass rounding up is a part of the overall suppression of civil society that has taken place under President Xi Jinping since he came to power over two years ago. In 2014, Xi’s government detained or jailed the highest number of human rights lawyers in any single year since rights lawyers emerged in China a few decades ago. Human rights lawyers Ding Jiaxi (丁家喜), Pu Zhiqiang (浦志强), Tang Jingling (唐荆陵), Wang Yonghang (王永航), and Xia Lin (夏霖) all remain behind bars. This year, authorities’ growing intolerance of outspoken lawyers protesting breaches of due process rights has led to constant clashes, many of which have turned violent. In the last three months, at least four lawyers were seriously injured in four separate violent incidents.

The dramatic crackdown on lawyers is also a measure of the government’s nervousness about their growing strength, an increasingly organized mutual support network within legal communities, and the lawyers’ rising prominence and influence in society, especially among disenfranchised groups that have been mistreated, including politically persecuted human rights defenders. The crackdown is an extension of the government’s long-term strategy to smother civil society, which it is legislating through the draft Overseas NGO Management Law and its provisions to cut off international support to Chinese NGOs. Most of the lawyers affected by the raids are affiliated with a loose circle of more than 200 lawyers, known as “China Human Rights Lawyers Group,” who routinely issue statements to protest rights violations, travel to support fellow lawyers, and challenge authorities obstruction of their client’s due process rights in court. After authorities shut down several independent groups in the past few years, including Gongmeng (the Constitutional Initiative), New Citizens’ Movement, Transition Institute, and Yirenping, the lawyers’ informal group is perhaps the only remaining widespread and organized alliance that is independent from the government.

Beijing Fengrui Law Firm may seem an obvious first target for authorities in its long-term strategy to crush the rights defense movement, since it has employed several of the country’s most courageous lawyers and recently employed leading activists, such as Wu Gan. The firm’s director, lawyer Zhou Shifeng, may have defied tremendous pressure to employ these rights lawyers and activists. For years, police and legal affair authorities have pressured law firms to fire or not hire rights lawyers. Many firms have acted cautiously for fear of losing their license to operate; rights lawyers who are forced to leave their firms or try to change firms often run into difficulty in getting new firms to hire them. It is clear that authorities failed to intimidate Fengrui Law Firm with the threat of sanctions, and they could not discredit Fengrui lawyer Wang Yu with a nasty state media led smear campaign last month. Instead, authorities have decided to “destroy” Fengrui, as the Xinhua article declared.

CHRD urges the Chinese government to unconditionally release all detained lawyers and others swept up in the raids; to end its reprisals against human rights lawyers for exercising their independence or protecting the judicial process from government interference; and to bring its National Security Law, the draft Internet Security Law, and the draft Overseas NGO Management Law into complete compliance with international human rights standards.

The international community should take actions to gain the release of the detained individuals. Strong protests by government, international agencies, and NGOs in March and April were followed by the release of five Chinese feminists and women’s rights activists. A concerted international campaign—#FreeRightsLawyers—will make a difference. More specifically, CHRD urges that: 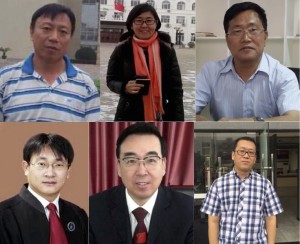 The annexed document is a list of the individuals detained or disappeared in the raids, which CHRD has crossed-checked and updated. To date, 6 are under criminal detention, 3 are being held under residential surveillance in undisclosed locations, 11 were taken into police custody and disappeared, and up to 100 have been summoned for questioning by police and later released.