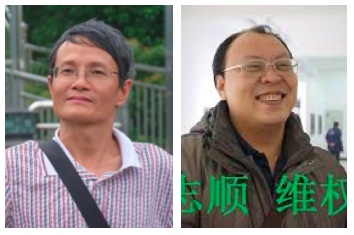 Activist Xing Qingxian (幸清贤), who has been disappeared by Chinese authorities for more than seven months after being abducted in Myanmar, was formally arrested on May 6 on suspicion of “organizing others to cross national borders,” according to a police notice received by his family. Xing is apparently being held in Tianjin Municipal No. 2 Detention Center—the first known confirmation of his exact whereabouts since he and another activist, Tang Zhishun (唐志顺), were taken away last October by Burmese police and then handed over to Chinese officers and brought back to China. Xing’s arrest was reported on May 18, or 226 days after the activists were first taken into custody and held incommunicado. At the time of this writing, Tang’s family has not received any police notice, but he is also believed to have been formally arrested, and likely on the same charge.

The activists’ case is intertwined with the “709” crackdown on human rights lawyers that was launched in July 2015. When seized at a guesthouse in Mong La, Myanmar, Xing and Tang were accompanying Bao Zhuoxuan (包卓轩), the 16-year-old son of now-arrested rights lawyers Wang Yu (王宇) and Bao Longjun (包龙军). The young man, who was also taken into custody on October 6, was reportedly trying to escape house arrest in China and reach Thailand in order to claim political asylum in the United States. Two days later, Xing’s home in Jinniu District in Chengdu in Sichuan Province was searched by local police and officers from Xing’an, Inner Mongolia, where Bao Zhuoxuan’s grandmother lives. Police confiscated several items and told Xing’s mother-in-law that the activist had been detained for “illegal immigration.” With Xing’s reported arrest, CHRD has now confirmed 19 individuals from the “709” crackdown who have been formally arrested.

Activist Xing Qingxian (left) was formally arrested on May 6—7 months after going missing. Activist Tang Zhishun (right), seized along with Xing, has also likely been arrested.

If Xing, 49, and Tang, 40, face trial for “organizing others to cross national borders,” a conviction carries a minimum prison sentence of two to seven years. An individual can be given seven years to life imprisonment if found to have been a “ringleader” or if there are other serious circumstances (China’s Criminal Law, Article 318).

Although the men’s lawyers were told in October that the case had been transferred to Tianjin, police from Tianjin Municipal Public Security Bureau have repeatedly refused to let the lawyers meet with their clients. Reportedly, authorities denied lawyer visits in October and November 2015, and again in January and February 2016; police stated that the cases are of “grave significance, hence a meeting is not allowed.” Due to their lengthy enforced disappearance, there are ongoing concerns about the activists’ vulnerability to mistreatment, including being deprived of necessary medication for serious health conditions. Xing Qingxian requires medicine to treat severe asthma, and he also suffers from rhinitis, a chronic inflammation of the nasal cavity. The Beijing-based Tang Zhishun has hyperthyroidism that requires daily medication and that, if left untreated, can lead to heart problems.

CHRD has sent two communications about the activists’ case to UN human rights experts, first in October 2015, shortly after Xing and Tang went missing, and again in early April, after they had been disappeared for six months. The communication last month highlighted egregious legal and procedural violations in the case, including denied legal counsel and lack of family notification of detention as required by Chinese and international law. Also in April, the men’s wives wrote to Nobel laureate Aung San Suu Kyi and appealed for assistance in securing the men’s release, after learning that she played a key role in the recent decision to free political prisoners in Myanmar (see letter in English and Chinese)

Xing Qingxian, originally from Guiyang in Guizhou Province, became involved in rights defense work after filing a lawsuit in 2004 over a wage dispute and termination against a company where he had worked as a technician. He studied law on his own and began providing legal advice to workers defending their labor rights. In 2009, Xing received a two-year prison sentence for “assembling a crowd to disrupt social order” after being seized at a peaceful demonstration. Following his release, Xing continued to document rights violations, assist petitioners, and train others on rights defense advocacy. Tang Zhishun, who has worked as an engineer, began focusing on rights defense issues after his home was demolished in 2006. He wrote a training manual to assist others in defending land rights, assisted eight villages in Beijing where homes were threatened with demolition, and helped found an independent public welfare organization.

CHRD calls for the immediate release of activists Xing Qingxian and Tang Zhishun. They have been detained as political persecution for their activism, including their efforts to rescue Bao Zhuoxuan from house arrest, and they are highly vulnerable to ill-treatment, including not having access to necessary medications.

For more information on these cases, see: