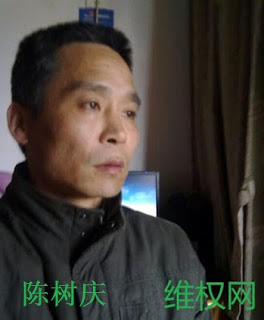 Police summoned Chen Shuqing, a Hangzhou activist and member of the China Democracy Party, twice for questioning on suspicion of “subversion of state power” between May and August 2014, before criminally detaining him that September. Authorities also searched Chen’s home in Hangzhou and seized a computer hard drive, a cellphone, articles, and other items. His detention came two months after fellow party member Lü Gengsong (吕耿松) was put under criminal detention. Both were later arrested for “subversion.” According to the indictment against Chen, his alleged “crime” was his involvement in the China Democracy Party, and publishing essays about the party on overseas websites, including Boxun News and Canyu. Authorities had initially set the date for their trials on July 23, 2015, but they were abruptly postponed and later held that September. The two were tried in separate cases, but Chen’s indictment included a references to Lü Gengsong, and the trials were held on the same date.

Police in Hangzhou summoned or detained several other members of the banned opposition party between April and August of 2014, including Xu Guang (徐光), Tan Hai (谭凯), Lai Jinbiao (来金彪), Hu Chen (胡臣), Wu Yuanming (吴远明), and Lou Baosheng (楼保生). Police held them on suspicion of various criminal offenses, including “inciting subversion of state power.” Xu Guang, the founder of the party, was formally arrested, but all were later released, except Lü and Chen.

Born on September 26, 1965, Chen participated in the 1989 pro-democracy protests in Tiananmen Square as a student at Hangzhou University. Beginning in 1998, he served as the director of the national organizing committee of the China Democracy Party after fellow Hangzhou-based activist Zhu Yufu (朱虞夫) was arrested and the party declared illegal. From the mid-2000s, Chen served a four-year sentence for “inciting subversion of state power” in apparent retaliation for posting a pro-democracy essay online. After his release in 2010, Chen resumed taking part in demonstrations and pro-democracy activities, and as a result was repeatedly summoned and questioned by police.

Opinions adopted by the Working Group on Arbitrary Detention at its eighty-sixth session on Chen Shuqing and Lü Gengsong, November 18-22, 2019