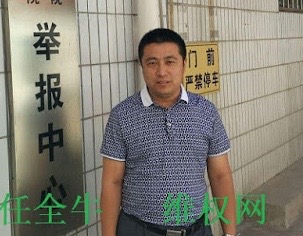 Lawyer Detained for Demanding Investigation Into Rumored Assault of Client

Rights lawyer Ren Quanniu has been criminally detained over social media posts demanding an investigation into the rumored sexual assault of his client, Zhao Wei.

Police in Henan Province have criminally detained rights lawyer Ren Quanniu (任全牛) over social media posts demanding investigation into the rumored sexual assault of his client, Zhao Wei (赵威). On July 8, the day Ren was detained, the Zhengzhou City Public Security Bureau posted on weibo that the lawyer, who is held on suspicion of “picking quarrels and provoking troubles,” was being investigated for “disseminating falsehoods” about possible sexual assault of Zhao at Tianjin No. 1 Detention Center. The police statement claims that Ren posted on weibo on May 27 about the assault rumors, which “severely damaged Zhao Wei’s reputation.” Ren was seized the day after Zhao was reportedly freed on bail, though no one has been able to independently confirm her release, and her whereabouts remain unknown at the time of writing. Lawyer Ren is being held at Zhengzhou City No. 3 Detention Center, where lawyers Chang Boyang (常伯阳) and Zhang Junjie (张俊杰) were able to see him on July 11.

Zhao Wei’s defense lawyers, Ren and Yan Huafeng (严华丰), who never were able to meet their client during her one-year detention, had tried to push authorities to investigate the assault rumors in early June, when police again denied a request by them to see Zhao. When messages appeared on Zhao’s weibo account after her unconfirmed release on July 7, Ren expressed doubt online that she had posted the messages. Zhao Wei, also known as Kaola (考拉), was arrested in January on suspicion of “subversion of state power” after being detained during the “709 Crackdown.” Before her detention, she had worked as an aide to arrested lawyer Li Heping (李和平).

More than 100 Chinese lawyers expressed outrage over Ren’s detention and demanded his release in a statement released on July 9. The day after Ren was detained, his wife and two children were evicted from their residence by their landlord, who had likely been pressured by authorities.

Shanghai police have reportedly held human rights defender and migrant worker Hu Changgen (胡常根) under criminal detention since June 6 for an alleged terror-related offense in retaliation for his online expression. Hu is facing a charge of “fabricating and spreading false terrorist information,” according to a local procuratorate, likely due to views that he posted online about discriminatory policies towards migrant laborers.

After Hu was taken into custody on June 6, lawyer Ji Zhongjiu (纪中久) was not allowed to meet with him for over two weeks. When Ji finally gained permission to visit Hu at Pudong District Detention Center, police refused to provide the lawyer details on the case, and only on July 8 did a procuratorate official even inform Ji of his client’s alleged crime. The legal provision for “fabricating and spreading false terrorist information” (Article 291 (2)) took effect in November 2015 as part of the Ninth Amendment to China’s Criminal Law. The offense is punishable by up to three years in prison in the least serious instances, but can range from three to seven years if “serious consequences” are involved.

Originally from Anhui, Hu Changgen has been a migrant laborer in Shanghai for over 20 years, and was working in a factory when he was detained. In recent years, Hu has pushed for rights protections for migrants like himself, including equal opportunity for their children to attend school in Shanghai. Laborers from outside the municipality usually lack local “household registration” (hukou) that entitles their families to social and economic benefits, including education in local public schools, unless they meet onerous requirements and pay large fees.

The UN Working Group on Arbitrary Detention (WGAD) declared the detention of activist Yu Shiwen (于世文) “arbitrary” and called on the Chinese government to release him, in an opinion issued in late April. Over two months later, however, Yu remains detained on suspicion of “picking quarrels and provoking troubles,” a trumped-up charge tied to his role in organizing a memorial for June 4th victims in early 2014. Yu was taken into custody in May 2014 during the crackdown around the 25-year anniversary of the Tiananmen Massacre, and has now been held for over two years without being brought before a judge.

The Chinese government has a track record of ignoring WGAD’s rulings, an indication of its systematic lack of cooperation with UN human rights mechanisms. Besides Yu Shiwen, other Chinese HRDs still remain incarcerated despite WGAD decisions declaring their detentions “arbitrary.” In January 2016, a Guangdong court sentenced to prison lawyer Tang Jingling (唐荆陵) and activists Wang Qingying (王清营) and Yuan Xinting (袁新亭) over a year after the Working Group found their detentions “arbitrary.” Detained activist Su Changlan (苏昌兰) was tried in April 2016 after the WGAD issued a similar opinion in December 2015. This pattern of the Chinese government’s defiance is also evident in the case of labor activist Xing Shiku (邢世库), who is still being detained in a psychiatric hospital in Heilongjiang two years after the Working Group issued its opinion on his “arbitrary” detention.

Since late September 2015, CHRD has provided information to UN human rights experts on a total of 45 detained or imprisoned defenders in China, including updates in April 2016 on 22 detainees from the “709 Crackdown.” In these communications, CHRD has requested that UN bodies inquire into allegations of torture, forced disappearance, arbitrary detention, and obstruction of justice by Chinese authorities in retaliation against these individuals’ human rights activities. In May, CHRD sent communications alleging torture against six detained activists, focusing on the reported denial of medical treatment, a form of official retaliation that has commonly been used against incarcerated rights defenders.

CHRD has been particularly concerned about the case of imprisoned activist Guo Feixiong (郭飞雄, aka Yang Maodong, 杨茂东), whose health has continued to decline due to denied medical care in Yangchun Prison in Guangdong, where he is serving a six-year sentence. As his family fears for his life, Guo has kept up a hunger strike since early May to protest his unjust persecution and mistreatment, with guards force-feeding him through a tube to keep him alive. CHRD has sent UN experts three letters alleging violations against Guo since he was taken into custody in August 2013, most recently in early April 2016.