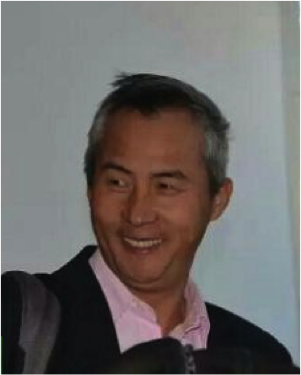 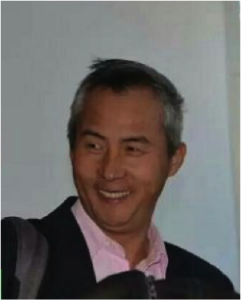 “The past ten years, I’ve struggled with him, argued and fought, and asked him not to stay in this risky profession, since surveillance by police has never stopped, with officers guarding the door day and night, and he has been kidnapped and beaten, threatened, and banned from traveling abroad. I can only say, even though he’s 45 years old, he’s still simple-minded: he simple-mindedly believes in the law, simple-mindedly seeks legal justice to bring about protection of citizens’ rights.”

Nearly a dozen plainclothes men who claimed to be from the Tianjin Municipal Public Security Bureau raided and searched human rights lawyer Li Heping’s Beijing home for four hours on July 10, 2015. Li’s wife, Wang Qiaoling, said she was not presented with a warrant when her husband was taken away or a notice for computers, external hard drives, legal case files, and books confiscated from the home. Around the same time, Globe-Law Law Firm, where Li is a partner attorney, was searched as well. Li’s assistants, Zhao Wei (赵薇, screen name Kaola, 考拉) and Gao Yue (高月), were also detained; Zhao disappeared the same day as Li and was later put under criminal detention in Tianjin, while Gao went missing on July 20 and was placed under residential surveillance at an undisclosed location. At the time they were seized, Li and his assistants had been working on a project to promote the International Convention against Torture, which China ratified in 1988. Their detentions have been part of a concerted police operation targeting human rights lawyers and activists that has partly been meant to suppress support for lawyer Wang Yu (王宇), who was detained on July 9.

After Li was taken into custody, his family and fellow lawyers searched for him at police stations in Beijing, Tianjin, and at Tianjin Public Security Bureau, but authorities refused to disclose his whereabouts. According to the state media agency Xinhua, he was placed under “compulsory criminal measures” on July 18, 2015. In a Xinhua article titled “Update on Fengrui Law Firm Case,” Li Heping was listed as one of nine main suspects of using that law firm, where Wang Yu works, as a platform for masterminding “serious illegal activities” to “incite social disorder.” Wang Qiaoling filed a defamation lawsuit against nine media outlets, including Xinhua, People’s Daily, and Sina, for misleading the public by portraying her husband as a criminal. In the suit, Wang presented many legal and procedural violations the authorities had committed, including not informing family members where Li was being held, and essentially declaring that he was guilty of allegations against him. In retaliation for Wang’s efforts, police broke into her home on August 6, 2015 and took her in for questioning, and warned her to stop advocating for her husband.

In January 2016, authorities finally confirmed Li was in police custody and being held at Tianjin No. 1 Detention Center, after he had been formally arrested on January 8 on suspicion of “subversion of state power.” A month later, officials told Li’s family-appointed lawyer Ma Lianshun (马连顺)  that he had been “fired,” but didn’t provide any evidence or allow Ma to meet with Li to verify such a decision was voluntarily made.

On December 5, 2016, Tianjin No. 2 People’s Procuratorate told Ma Lianshun that Li had been indicted, but refused to disclose which crime had had been formally charged with. Three days later, authorities confirmed to his wife that he has been indicted for “subversion of state power,” but only after she travelled to the Tianjin procurtorial offices. His indictment comes after a lengthy delay from authorities: In June 2016, Tianjin police recommended Li be indicted and transferred to prosecutors for review. On August 8, Tianjin No. 2 People’s Procuratorate sent the case back to police for further investigation, and the case was returned to the prosecutors for review on August 15.

On April 28, 2017, the Tianjin No. 2 Intermediate People’s Court weibo announced that Li had been tried in secret on April 25, and convicted and given a suspended sentence on April 28. Authorities held a closed door trial on the grounds it involved “national security,” and Li’s wife was not informed of the trial or sentencing hearing until after it had finished. According to the court’s announcement, Li pleaded guilty and said he would not appeal. He was represented by a government-appointed lawyer, after being denied access to the lawyer appointed by his family for the duration of his detention. The announcement claimed Li had “attacked” China’s political and legal system through postings online, interviews with foreign media, and accepting funding from overseas.

Li returned home on May 9, 2017, and reportedly told his wife of being forced to take medication and being chained for weeks while detained. Following his release, his family remained under surveillance. On June 6, 2018, judicial authorities in Beijing disbarred Li, which means he is forbidden from practicing law–a punishment exacted on Chinese lawyers who are convicted of criminal behavior.

Born in October 1971 in Henan Province, Li Heping graduated from Henan University with a law degree in 1995, and began practicing commercial law in 1997. Li later began to take on criminal defense cases, including representing an innocent man accused of rape and murder, and was very successful in this work. Looking to handle more significant cases in major city, Li relocated in 2000 to Beijing and received a Master’s Degree in Law at Renmin University in 2005. In the capital, he represented activists, dissident writers, farmers whose property had been expropriated, and other rights lawyers. Despite the government’s repressive policy on religions freedom, Li Heping, a Christian himself, also represented underground church members and Falun Gong practitioners who had been persecuted.

Li Heping first worked as a lawyer at Gaobo Longhua Law Firm, where he began to take on politically sensitive cases. In 2001, he defended Yang Zili (杨子立), a university student charged with “subversion of state power” and later jailed for posting articles online about reforms and democracy. In 2005, on behalf of the blind, self-taught lawyer Chen Guangcheng (陈光诚), Li Heping filed complaints against officials in Shandong Province, where Chen lived, seeking government accountability for human rights abuses. Authorities warned Li that his law license would be suspended if he got involved in Chen’s case. That same year, Li appealed to the Beijing Bureau of Judicial Affairs on behalf of the vocal human rights lawyer Gao Zhisheng (高智晟) after Gao’s license was suspended by the bureau.

In 2006, Li Heping defended more high-profile cases: Tan Kai (谭凯), an environmentalist and founder of “The Green Watch”; and one of the leaders of the “San Ban Pu Ren” (三班仆人, a Christian sect that the Chinese government labeled as a “cult”) who was sentenced to death and executed in December 2006. That same year, he took on a Falun Gong case where Li argued that it is unconstitutional for the government to label a religion as a “cult,” religion and state should be separated, and an individual has the right to their beliefs. His 10,000-word defense statement, co-penned by several other attorneys, titled “Constitution is Supreme, Freedom of Religion,” became a frequently used reference for other lawyers when representing Falun Gong practitioners.

As Li Heping pursued more cases defending political and civil rights, he became a target for government reprisal in the form of threats, arbitrary detention, and torture. In September 2007, Li was abducted after he briefly spoke to policemen who were following him. A dozen plainclothes men put a hood over his head, dragged him into a car with no license plate, drove for about an hour to an unknown location, and took him to a basement. The men removed the hood and stripped him of his clothes (except of his underwear). They beat him for six hours with electric rods, and took turns pulling his hair, pushing him, and verbally abusing him. While torturing him, the men shouted, “Get out of Beijing! Otherwise, we’ll beat you whenever we see you.” Around midnight, they put the hood back on Li’s head, drove him away, and dumped him in woods in suburban Beijing. Li sustained injuries all over his body from the grueling ordeal.

Under mounting government pressure due to his work on high-profile rights cases, authorities did not renew Li’s law license in 2009, effectively barring him from practicing law. Without formal credentials, Li eventually decided not to directly represent cases and instead chose to provide legal consultation. Li focused on pushing for the abolition of torture in China, producing writings and a booklet on anti-torture topics and giving legal assistance in torture cases.

Li has been widely recognized for his daring rights defense efforts. Li Heping was named one of the vanguard human rights lawyers of 2005 by the international magazine Asia Weekly. In 2008, National Endowment for Democracy gave him its Democracy Award for Religious Freedom, and the same year he was honored with the Human Rights Award, bestowed by The Council of Bars and Law Societies of Europe.

Submission to UN on case of Li Heping – October 2007, CHRD