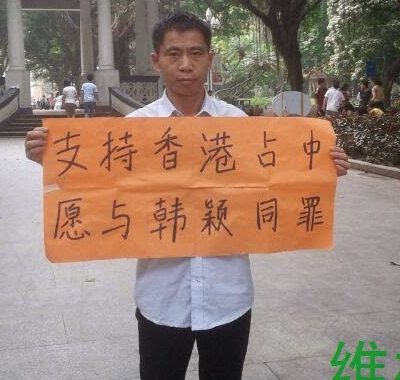 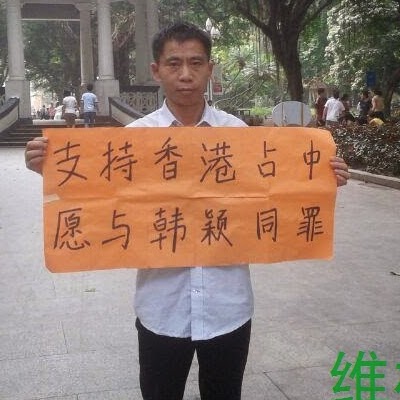 Guangzhou police detained activist Zhang Rongping during the suppression surrounding the 2014 pro-democracy protests in Hong Kong. Plainclothes police first seized him on October 3, 2014, while Zhang was walking down a street in Guangzhou, and criminally detained him for “picking quarrels and provoking trouble.” Zhang was taken into custody days after he posted a photo of himself holding a sign backing both Hong Kong and Beijing activist Han Ying (韩颖), who was also arrested in the crackdown. (Han was released on bail after eight months in detention.) Zhang’s lawyers learned in February 2015 that police had changed his alleged criminal charge to “inciting subversion of state power,” for which Guangzhou prosecutor’s indicted him on May 25, 2015.

After being held incommunicado for months, Zhang’s lawyer, Liu Zhengqing (刘正清), finally met with Zhang for the first time in January 2015 at Guangzhou No. 1 Detention Center. During a later meeting, Zhang told his lawyer that after he complained about being mistreated in September 2015 he was shackled and beaten in retaliation; he said he was kicked in the head and restricted from using the toilet, washing his teeth, bathing, or changing his clothes. These allegations of mistreatment were never investigated by authorities.

Issued in April 2016, the court’s verdict against Zhang said he had posted online several pro-democracy articles and information on a loose group called the “Justice Oath” that promoted democracy, and that he incited others by calling for donations to support such an organization. It went on to say he held demonstrations against the Chinese Communist Party (CCP), after which he uploaded protest images to the Internet. The verdict also listed as evidence of his “crime” that he tried to push for a multi-party democratic system and end CCP’s the one party dictatorship, and that all these actions constituted “inciting subversion of state power.” Zhang’s lawyers argued that all he had done was exercise free speech as a basic right.

Zhang’s lawyers met with him in February 2017 in Meizhou Prison. They reported Zhang was generally in good health, but had lost a lot of weight. Zhang told his lawyers that officials at the prison were refusing to accept funds sent to Zhang by his friends to use in the prison for things like better food, medicines, and personal hygiene products. Zhang was released from prison on August 25, 2018, when he was reportedly taken back to his home by national security officers but not yet allowed to move about freely.

Zhang, also known by his screen names Zhang Shengyu (张圣雨) and “Ghost Sage” (鬼圣), was born on April 4, 1969, in Hunan Province. He has been involved with the “Southern Street Movement” in Guangdong, which has consisted of activists taking to the streets or other public spaces to conduct rights advocacy and express political ideas. In 1997, Zhang received a three-year prison sentence for “robbery.” He became active in human rights campaigns in 2010, and since then has been detained several times for his work, including in 2012 on suspicion of “subversion of state power” for distributing leaflets about democratic freedoms.