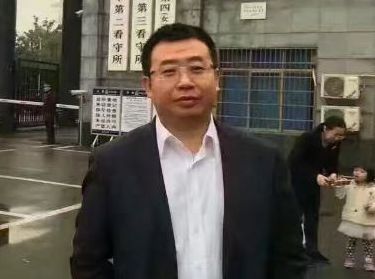 (Chinese Human Rights Defenders—December 16, 2016) After forcibly disappearing the human rights lawyer Jiang Tianyong for 25 days, Chinese authorities finally confirmed that he is in police custody under “compulsory criminal measures.” According to the state media report, public security officers took Jiang into custody on November 21 and gave him a nine-day administrative detention for “fraudulent use of another person’s ID.” On December 1, he was then placed under “compulsory criminal measures” for “illegally possessing documents classified as state secrets” (Article 282 Criminal Law) and “illegally disseminating state secrets to overseas [sources]” (Article 111) and other unnamed “crimes.” Jiang could face life imprisonment if convicted of Article 111 and authorities considered the conditions to be “especially serious.”

CHRD asks the Chinese government to immediately release Jiang Tianyong, on the grounds that his detention is clearly arbitrary under international human rights standards and China’s domestic legal provisions. According to a statement released by Jiang’s wife:

Jiang Tianyong, 46, is a leader of the China Human Rights Lawyers Group (中国人权律师团) and an outspoken supporter of detained rights lawyers from the “709 Crackdown.” He disappeared on the night of November 21 when he was meant to board a train to Beijing from Changsha in Hunan Province. Jiang had been in Changsha to meet with Chen Guiqiu (陈桂秋), the wife of arrested human rights lawyer Xie Yang (谢阳), and Xie’s defense lawyers. They had attempted to visit Xie Yang at Changsha City Detention Center.

On November 23, one of Jiang’s family members reported his disappearance to the Tongbolu Branch of the Zhengzhou Public Security Bureau in Henan. Although Jiang is a registered resident in Zhengzhou, authorities there refused to investigate his disappearance, claiming that “jurisdictional constraints” prevented them from doing so because Jiang was travelling to Beijing when he went out of contact. Police in Beijing and Changsha refused requests from his family and supporters to release surveillance video of the Changsha South Train Station and the train that Jiang was supposed to board. In an open letter released on November 27, prominent Chinese lawyers called for Jiang’s release. On December 6, three UN special experts called on China to investigate Jiang’s disappearance and raised deep concerns that his disappearance was in reprisal for Jiang’s cooperation with a UN Special Rapporteur’s visit to China in August.

Jiang has defended or supported many high-profile human rights defenders, including rights lawyer Gao Zhisheng (高智晟) and legal advocate Chen Guangcheng (陈光诚). Judicial officials disbarred Jiang from practicing law in 2009 due to his involvement in such cases. Since then, Jiang has taken an active role in organizing Chinese human rights lawyers to provide legal counsel to victims of rights abuses and criticized authorities’ abuses of legal rights.

Authorities have tortured, disappeared, and arbitrarily detained Jiang on several occasions. Police detained Jiang in March 2014 after he and three other lawyers went to investigate a “black jail” in Jiansanjiang City in Heilongjiang where Falun Gong practitioners were allegedly being held; Jiang was beaten in police custody and suffered eight broken ribs. In May 2012, police seized Jiang when he was on his way to visit Chen Guangcheng in a Beijing hospital, detained him for nine hours, and beat Jiang so badly that he suffered hearing loss. In addition, police forcibly disappeared Jiang for two months in the spring of 2011, following online calls in China to hold “Jasmine Rallies” just as pro-democracy movements spread across the Middle East and North Africa.