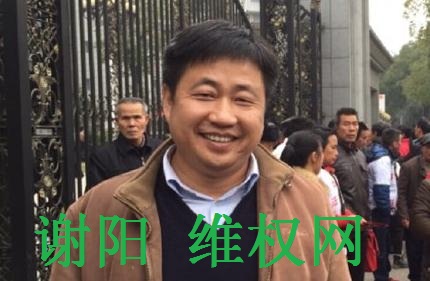 Length of Punishment: Exempted from punishment

Changsha police detained Hunan lawyer Xie Yang in the “709 Crackdown” on human rights lawyers and activists in July 2015. Police took Xie from his hotel in Huaihua City, Hunan Province along with his assistant, Wei Deifeng (魏得丰), who was released after 24 hours. Xie was put under “residential surveillance at a police-designated location” for six months, during which police refused Xie all access to his lawyer and did not notify his family of his location. In January 2016, officials formally arrested Xie on suspicion of “inciting subversion.” According to a statement released by his wife on August 12, 2016, Xie’s case was transferred for review to a Changsha procuratorate, which days later sent the case back to police for further investigation.

For months, Changsha authorities refused to allow Xie’s lawyers, Zhang Chongshi (张重实) and Lin Qilei (蔺其磊), a meeting with their client, on the grounds that he is being investigated for a crime in the category of “endangering national security” and that the lawyers could hinder the investigation or leak state secrets (Article 37 of Criminal Procedure Law). In August 2016, Xie’s family released information stating that authorities granted one meeting between Xie and his lawyers in late July in an attempt to have the lawyers convince Xie to confess. Xie told his lawyers that he had been tortured in August 2015 while in “residential surveillance” and also in July 2016 in the detention center, when police tried to coerce him into confessing. In August, police hanged Xie from the ceiling and repeatedly beat him. Xie lost consciousness at one point and was taken to the hospital. In detention, he is being held with inmates charged with crimes eligible for the death penalty. Xie told his lawyers that the inmates have been instructed to monitor him in his cell, and have beaten him with shackles. No investigation appears to have been conducted into the allegations, and officials have since refused to allow his lawyers to meet him.

In April 2016, authorities placed a travel ban on Xie’s wife, Dr. Chen Guiqiu (陈桂秋), a professor of chemical engineering at Hunan University, claiming that it would “endanger national security” if she left the country. The ban on Chen appears to be due to the fact that she has publicly supported her husband’s innocence. Dr. Chen attempted to sue to have the ban lifted, but the Shenzhen City Intermediate People’s Court refused to accept the suit.

His wife released information in December 2016 that Xie’s lawyer Zhang Chongshi had been granted a brief meeting on November 21, 2016. Zhang had heards sounds of Xie Yang being beaten by a guard, and saw signs of injuries on Xie’s head. Prominent lawyer and activist Jiang Tianyong (江天勇) had met with Xie’s wife and his lawyers Zhang and Lin on November 21, 2016, and went missing afterwards. On December 16, Changsha People’s Procuratorate indicted Xie on charges of “inciting subversion of state power” and “disrupting court order” and transferred his case to Changsha Intermediate People’s Court.

In early January 2017, Xie provided extensive details of alleged torture to his lawyers during several meetings. According to notes collected by Xie’s lawyers Chen Jiangang (陈建刚) and Liu Zhengqing (刘正清) during meetings with Xie between January 4-13, 2017, and released later that month, Xie Yang disclosed details of being tortured by the police officers from the Changsha Public Security Bureau, including the head of the detention center, and procuratorate officials. The abuses took place mainly in the initial days of the six months of Xie’s detention under “residential surveillance at a designated location” (RSDL), from July 11, 2015 to January 9, 2016. Though torture continued, Xie said, after he was moved to Changsha City Public Security No. 2 Detention Center, where he has been detained since being formally arrested in January 2016. Following the revelation of these torture allegations, state media released a smear campaign in early March 2017, claiming the allegations were false. Authorities then blocked Xie’s lawyers from meeting him again.

Xie’s wife announced that she had been told Xie would be put on trial on April 25, 2017, at the Changsha City Intermediate People’s Court. Dozens of supporters, diplomats and foreign media attempted to attend the trial, but were told it was postponed. On May 8, 2017, the court put out an announcement on its weibo account that the trial had begun that morning at 9:30 am, and claimed it was “public.” However, despite photos posted on the court’s social media account of announcement boards inside and outside the courthouse dated May 5, there was no announcement made online or on the court’s website, nor were the photos posted online on May 5. No attempt was made to genuinely publicly announce this trial, effectively making it a closed door “show trial.” According to transcripts released by the court, Xie was represented by two attorneys named He Xiaodian (贺小电) and Liu Zhijiang (刘志江), who did not raise allegations of torture. Xie’s attorneys appointed by his family, Chen Jiangang (陈建刚) and Liu Zhengqing (刘正清), were not allowed to attend. On May 3, Chen Jiangang and his family and two friends were seized by police while vacationing in Yunnan. His wife and young children were released, but Chen was still forcibly disappeared on the day of the trial.

The United Nations released a statement on May 5, 2017–the day of Xie’s trial–calling for the lawyer’s release. Xie reportedly was released on bail on May 8. His whereabouts were unknown for a period of time, but it was subsequently reported that Xie was living at home, though under extremely tight police control. Guards were occupying a residence next to his home and closely monitoring his movements, a situation of virtual house arrest.

On December 26, 2017, the Changsha court stated that Xie was guilty of “inciting subversion” but declared that he would be “exempt” from punishment, since he had admitted at trial to criminal behavior and “expressed regret.” In court, Xie denied allegations of torture that had been reported in January 2017, and apologized for “misleading the public.” It is believed that Xie’s statements at the December hearing, including his “confession,” were issued under coercion and in direct exchange for “leniency.”

Xie Yang was taken away by authorities on January 11, 2022, after he protested in support of Li Tiantian, a teacher in Hunan province who was forcibly put in psychiatric detention after she protested in support of a teacher in Shanghai, Song Gengyi,who was fired after she questioned the government’s official death toll of the Nanjing Massacre. Xie has now been criminally detained on the charges of “inciting subversion” and “picking quarrels and provoking trouble”.

Xie Yang, born on February 4, 1972, has been a lawyer with Hunan Gangwei Law Firm and has represented many politically sensitive cases. Some of Xie’s previous clients include activist Xue Mingkai (薛明凯), arrested in 2011 during the “Jasmine Crackdown”; New Citizens’ Movement activist Zhang Baocheng (张宝成), who was imprisoned in 2014; and “Southern Street Movement” activist Xie Wenfei (谢文飞), seized during the 2014 clampdown on mainland supporters of the Hong Kong pro-democracy protests. In early 2014, Xie Yang criticized the violent assaults against four human rights lawyers in retaliation for defending their clients; perhaps to avoid official rebuke over Xie’s stance, his law firm issued a statement at that time denying it was employing Xie. More recently, Xie represented the family of a petitioner shot to death by police in Qing’an, Heilongjiang in May 2015, in one of the “politically sensitive” cases authorities cited as a “subversive” activity conducted by the lawyers in the “709 Crackdown.” Days after he traveled to Qing’an, Xie was himself a victim in an incident of violence in Guangxi while handling a case involving a financial dispute between two companies.

China Must Drop All Charges Against Lawyer Xie Yang, May 9, 2017