China Must Drop All Charges Against Lawyer Xie Yang 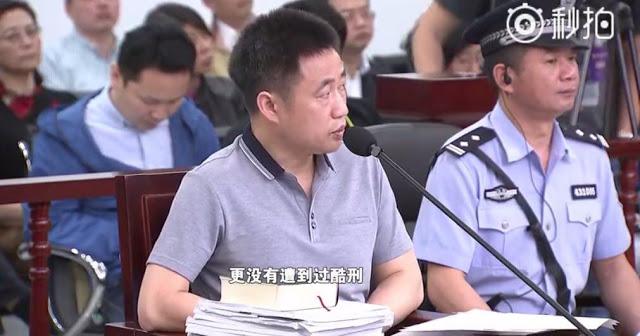 (Network of Chinese Human Rights Defenders, May 9, 2017) – The Chinese government must drop all charges against human rights lawyer Xie Yang (谢阳). Xie Yang’s trial on May 8, tightly controlled and orchestrated by authorities, made a mockery of justice. He was reportedly released on bail after the trial, likely in exchange for his guilty plea, though his whereabouts remain unknown. Authorities detained Xie Yang in retaliation for his work defending persecuted human rights activists, lawyers, and political and religious dissidents. The government refused to allow an independent and impartial investigation into Xie’s allegations of torture in detention. This case has been replete with abuses of Xie’s due process rights, and his lawyers and family have faced intimidation and harassment.

The trial at the Changsha Intermediate Court followed the government’s script in the ongoing political persecution of China’s human rights lawyers in the past two years—through detention, torture, forced confession, imprisonment, and public humiliation on state television. Government-imposed lawyers represented Xie in court, while Xie’s own lawyers were either detained or kept in the dark about the trial. At the hearing, the state-appointed lawyers did not mention Xie’s allegations of torture in detention, nor requested the judges exclude any evidence extracted through torture.

Hunan authorities claimed on state media to have conducted an investigation in February 2017 into Xie’s allegations of prolonged torture in police custody, which came to light in January. The investigation was reportedly conducted by Hunan Provincial Procuratorate, which is the direct supervisory body of the policemen and prosecutors who were the alleged perpetrators. The investigation lacked any transparency, as only state controlled media reported about it. Xie’s family and lawyers never received the final report.

At the trial, Xie answered “no” to the prosecutor’s question about whether he was ever tortured. The court did not hear any evidence that Xie’s confessions were legally obtained, such as non-edited video recordings from his interrogations, as required by China’s Criminal Procedure Law when there is suspicion of confessions extracted through torture. Xie Yang’s wife issued a statement on May 8, expressing her concern that Xie was recently subjected to further torture and intimidation. Since February, he has not been allowed to see his lawyers hired by his family that had documented his torture allegations.

Reading from a prepared statement on May 8, Xie, apparently acting under duress, entered a “guilty” plea on charges of “inciting subversion of state power” and “disrupting court order,” and expressed “repentance” for his alleged crimes. In court, Xie said that he had attended trainings abroad, which prosecutors argued indicated his ties to “foreign elements.” Prosecutors told the court that Xie had used Telegram, an instant messaging app, to conspire with people inside and outside the country to “subvert state power, overthrow the socialist system and harm national security and social stability,” according to the court’s weibo account. (See full indictment.)

An affidavit that Xie signed on January 13 with his lawyer, however, explicitly stated that, if he was to appear on TV or in trial making a confession, it must be either the result of torture or a compromise made in exchange for being reunited with his family. In the affidavit, Xie stated that he was “completely innocent,” and that police had repeatedly tortured him to extract a confession; if he would ever “admit guilt, either in writing or in an audio or video recording, the [confession] does not indicate my true thoughts, but instead was coerced by torture and ill-treatment, or made in order to allow me the best guarantee of being released on bail, returning home, and reuniting with my family.” Xie said that he and his family were both under tremendous pressure from authorities who demanded that he drop his torture allegations.

Though Xie has been released on bail, he remains a criminal suspect and subject to arbitrary controls and harassment from police, and he is at risk of disappearing into extralegal police custody. Prominent lawyer, Li Heping (李和平), received a suspended sentence last week and was “released” but has since disappeared. CHRD has documented 15 individuals detained in the “709 Crackdown” that disappeared into police control after being released on bail or a suspended sentence, and 13 are still missing.

The Chinese government tried to present a veneer of legality with Xie’s trial, by posting information on the court’s weibo account in real time, covering it on state TV, and featuring the case prominently on the court’s website. However, the heavily scripted hearing and its state coverage bears the familiar hallmark of previous show trials and government-staged TV confessions of other Chinese rights defenders. Announcement of the trial date was not made public “three days in advance,” as required by Chinese law, and appeared on the court’s weibo only 20 minutes before the trial opened. Also, while the government claimed the proceedings were “open,” police put Xie Yang’s father-in-law and other supporters under house arrest before and during the trial, and warned activists not to show up at the courthouse or comment on it online.

For months, Xie’s wife and daughters faced police harassment and intimidation, particularly after the alleged torture of Xie was reported in January, and they finally fled the country for their own safety. Last week, police briefly detained Xie’s lawyer Chen Jiangang (陈建刚), his wife, and two young children during a family trip in Yunnan. Chen reportedly remained under police control during the trial on May 8.

In March 2017, police claimed Xie had “fired” lawyers Chen and Liu Zhengqing (刘正清). Previously, authorities had largely blocked Xie’s access to his lawyers for 16 months, a rights deprivation that put Xie at greater risk of torture and all but guaranteed an unfair trial. Xie has been held at Changsha City Public Security No. 2 Detention Center since being formally arrested in January 2016. Authorities took Xie into custody as part of the “709 Crackdown” on human rights lawyers.

Under these extraordinary circumstances, the trail of Xie Yang is seriously tainted. Xie Yang is not free unless he is released from extralegal detention and enforced disappearance.