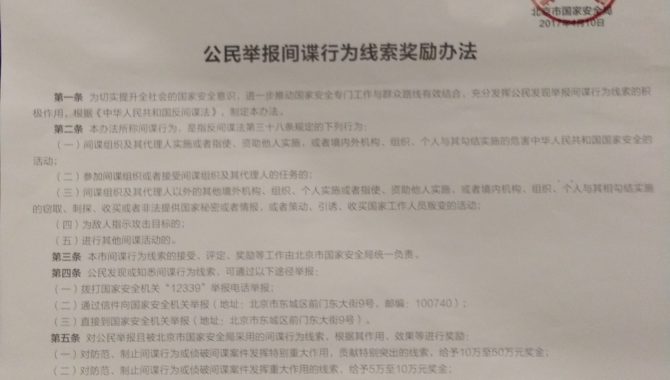 (Network of Chinese Human Rights Defenders, May 24, 2017) – Provisions in China’s new draft intelligence law, if adopted in their current form, would authorize pervasive surveillance on NGOs and intrusion on privacy. The draft law requires all Chinese citizens to collaborate with national intelligence collection; authorizes Chinese intelligence agents overseas to use “the necessary means” in their work; and requires intelligence agencies to collect and process information on foreign groups and individuals operating in China that allegedly fund, incite or implement acts that “endanger national security,” or domestic groups or individuals “colluding” with foreigners inside China. The draft intelligence law clearly aims at further tightening control over civil society organizations, both domestic and international, which are already under assault as “hostile forces” that threaten “national security.”

A government notice on how Chinese citizens can report on suspected “spying” activities.

The National People’s Congress (NPC) released the draft of the National Intelligence Law on May 16, 2017, and it is open for public comments until June 4. From that time, there will be a second reading of the bill by the NPC, a largely rubber-stamp parliament, and it may then be adopted. A selected “explanation” of the draft law has been released on the NPC website, with a full draft posted online on a separate website.

Though the draft law contains language about “respecting and protecting human rights” in national intelligence work (Article 7), it is replete with provisions authorizing the expansion of the power of state intelligence agencies to conduct surveillance of NGOs. It joins the phalanx of recently adopted Chinese laws that tighten the government’s grip on civil society, including the Counter-Espionage Law (2014), National Security Law (2015), Counter-Terrorism Law (2015), Overseas NGO Law (2016), and Cyber-Security Law (2016). In releasing the draft law, the NPC explicitly stated that authorities should work to properly coordinate these laws.

CHRD has serious concerns over the following draft provisions:

In its current draft form, the intelligence law further infringes the rights to free expression, association, and peaceful assembly in China. President Xi Jinping has escalated his crackdowns on civil society and prosecuted lawyers and activists for promoting and protecting human rights as “endangering national security.” International NGOs operating in China have been treated as “hostile foreign forces.” According to CHRD’s documentation, almost one-third of imprisoned human rights defenders since 2013 were convicted with “endangering state security” crimes. By putting out yet another law legalizing surveillance and persecution of human rights defenders in the name of national security, China continues to defiantly ignore UN Human Rights Council resolution (HRC 27/31), which calls for the “creation and maintenance of a safe and enabling environment for civil society.”

CHRD urges the NPC to drop or revise key provisions in the National Intelligence Law to ensure protection of Chinese citizens and foreign nationals’ human rights. International organizations, foreign NGOs, and like-minded governments should submit comments on the draft law, and raise concerns with officials at all levels of the Chinese government.