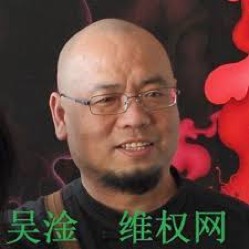 (Network of Chinese Human Rights Defenders – August 14, 2017) – The Chinese government must release activist Wu Gan immediately and unconditionally. The state’s persecution of Wu, including today’s trial, punishes him for his exercise of free speech and peaceful assembly. The case has been rife with abuses of his due process rights, including the right to a fair and open trial.

Chinese authorities tried Wu Gan behind closed doors on a charge of “subversion of state power.” The Tianjin No. 2 Intermediate People’s Court, where Wu stood trial, announced on its weibo account that a verdict would be issued on a later date. The court cited “state secrets” in Wu’s case as the pretext for closing the trial to the public. Wu Gan (吴淦), 45, an advisor at the Beijing Fengrui Law Firm and an activist known for his bold and provocative advocacy tactics, was detained in late May 2015, weeks before the launch of the “709 Crackdown” on human rights lawyers. His lawyers and family have accused police of forcibly disappearing Wu and torturing him to try to coerce him to confess to criminal acts. The activist, who was held in pre-trial detention for 27 months, was kept incommunicado for the first 19 months of his time in custody.

Fujian national security officers intercepted Wu Gan’s father Xu Xiaoshun (徐孝顺) in Beijing four days before the trial, and it is unclear if Xu was allowed to attend the proceedings. There was a heavy police presence outside the Tianjin courthouse. At the time of writing, more than a dozen supporters of Wu Gan who had attempted to observe the trial had reportedly been taken into custody and then held at Guijiasi Police Station in Tianjin’s Hexi District. In addition, several people have been reported to be missing after being seized around the courthouse.

The Tianjin court’s announcement claimed that Wu Gan admitted criminal wrongdoing. However, Wu Gan insisted on his innocence in a statement released through his lawyers before the trial, which read in part:

“I will be convicted not because I am guilty, but because of my refusal to accept a government-appointed lawyer, to plead guilty in a televised propaganda confession, and because I exposed torture, mistreatment, violence, and prosecutorial misconduct.”

Police first seized Wu Gan on May 20, 2015, outside a courthouse in Nanchang City in Jiangxi, where he was staging a protest to support harassed lawyers working on wrongful conviction and death penalty cases. Wu served a 10-day administrative punishment after the protest and was then directly put under criminal detention on May 27, 2015, on suspicion of “libel” and “picking quarrels and provoking trouble,” and sent to Yongtai County Detention Center in Yunnan Province. The Xiamen City People’s Procuratorate approved his arrest on July 3, 2015, for “picking quarrels” and a more serious charge of “inciting subversion of state power.” On January 20, 2016, Wu’s case was transferred to Tianjin, where other “709” crackdown detainees were being detained, and police re-started investigation in his case, claiming that “new evidence” had emerged. Wu was indicted on December 23, 2016, but for a more severe offense, “subversion of state power.” As evidence of “subversion,” the indictment against Wu cites his courthouse protests and online postings criticizing government authorities for abusing legal rights. Wu told his lawyers that, while at the detention center, he was tortured and threatened by police to force him to confess and admit guilt on state television.

Wu’s connection with the Beijing Fengrui Law Firm has been a major factor in his detention and prosecution, linking his case to the “709 Crackdown.” Fengrui’s director Zhou Shifeng, also detained in the crackdown and now serving a seven-year prison sentence, hired Wu as a special advisor in the spring of 2015. Fengrui publicly backed him after he was detained that May and subjected to a smear campaign in state media, and Fengrui lawyer Wang Yu initially represented Wu. Lawyer Wang’s own detention on July 9 marked the start of the crackdown, which would affect over 300 lawyers and activists. In targeting so many individuals, Chinese authorities appear to have viewed the close ties emerging between activists and lawyers as a new threat. The government again turned to state-media to manipulate public opinion, accusing Fengrui of being a “criminal syndicate,” and came down hard on the law firm by imprisoning its director and detaining several of its lawyers and staff members. Another one of the firm’s lawyers, Wang Quanzhang, has been detained incommunicado since August 2015.

Wu Gan, known by his screen name “Super Vulgar Butcher” (超级低俗屠夫), or “The Butcher” (屠夫) for short, had often conducted advocacy campaigns that incorporate spirited social media messaging, humor, and street performance. A veteran of the People’s Liberation Army, Wu also worked as a security guard at the Xiamen Gaoji International Airport for over 10 years. He resigned from that job in 2008 and became a blogger and then an activist to campaign for social justice. In 2009, Wu gained notice for his advocacy for victims in several high-profile cases, including the case involving migrant worker Deng Yujiao (邓玉娇), who killed a government official in Hubei who refused to back off an attempted sexual assault against her, and a case involving four men sentenced to death in 2003 after being tortured into confessing. Wu Gan’s work on that death penalty case was vindicated when the four defendants were acquitted at a re-trial on December 22, 2016. Each received 2.27 million RMB, or approx. US 330,000, in compensation in early August 2017—or just days before Wu Gan went on trial.

Activist Wu Gan was tried behind closed doors on August 14, 2017, for “subversion of state power” in a sham trial in Tianjin, after being detained for 27 months.