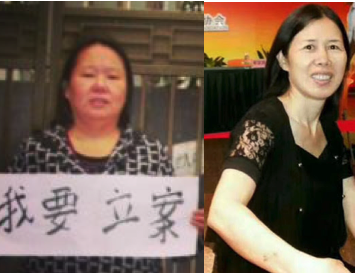 The award has been given to those who carry on Cao’s grassroots advocacy while facing threats and risks in promoting human rights, protecting vulnerable social groups from abuses, pushing for civil society participation in international human rights mechanisms, and monitoring the Chinese government’s implementation of its human rights obligations. The award includes prize money to support ongoing initiatives and assist the recipients, who have suffered government reprisal.

Cao Shunli died on March 14, 2014, after being held in detention for five months and denied adequate medical treatment. Police seized her in Beijing on September 14, 2013, as she was boarding a flight to Geneva, where she was to attend a session of the UN Human Rights Council (HRC) and an international human rights training. Starting in 2008, Ms. Cao had worked to push Chinese authorities, without success, to allow civil society participation in drafting China’s National Human Rights Action Plans and its state reports for China’s first and second Universal Periodic Review at the UN HRC. She faced reprisals as a consequence of her role in such efforts. 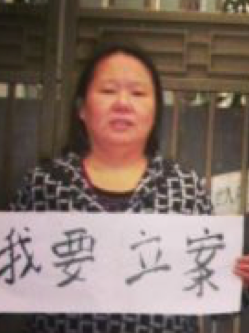 Chen Jianfang, based in Shanghai, 48, has engaged in human rights activism for the past decade. Formerly a farmer, Chen began defending land and housing rights after she and her family lost land to government-backed developers. She went on to expand the scope of her advocacy, exposing systemic causes of rights abuses and the Chinese government’s persecution of social and economic rights defenders’ civil and political rights. Chen has weathered persecution by authorities to emerge as a leading voice for land and housing rights in Shanghai, where land grabs and forced home demolitions have been rampant behind the local skyscrapers and high-speed railways, symbols of China’s “development” model virtually devoid of human rights protections.

In 2008, Chen Jianfang worked closely with Cao Shunli in efforts to participate in national-level consultation with civil society for the 2009 UPR, by trying to get the government to receive human rights information they had collected. Authorities refused to accept any such information and instead retaliated against the two women and others who engaged in this advocacy. In June 2013, Chen and other activists took to the streets in Shanghai and handed out copies of “UPR Recommendations” to China, which had been made by UN Member States during China’s first Universal Periodic Review in 2009. This action helped raise awareness of the UPR process at the grassroots level. Upon learning of the recommendations, some Shanghai residents reportedly expressed hope that more countries would encourage the Chinese government to improve its policies and practices, particularly those affecting the rights of disadvantaged groups and issues of forced demolitions and land expropriation.

“Over the years, Chen Jianfang has advocated for human rights in relative obscurity, without seeking fame or benefits for herself, and always toiling with great diligence and dedication. She’s truly a model grassroots human rights defender in China today.” – Chinese activist

In September 2013, authorities stopped Chen from boarding a flight in Guangzhou to attend a human rights training and observe a HRC session in Geneva—on the same day when Cao Shunli was abducted by police while heading to the same program. Police forcibly returned Chen to Shanghai, where she was detained, interrogated, and closely monitored. Chen was disappeared in November 2013—just a week prior to the HRC election, when China would be voted to the body for a second term despite a bleak human rights record and efforts by many, including Chen, to expose the government’s abuses.

Chen’s advocacy has put her at constant risk of retaliation by authorities, including intimidation, physical assault, and arbitrary detention. She was again prevented from traveling abroad in October 2017, when she was to take part in a human rights forum in Ireland. Authorities have tried, though unsuccessfully, to deter Chen and stifle her advocacy by locking her up in “black jails” (makeshift detention facilities), and police also detained her for 15 months at a Re-education through Labor camp in 2010-11.

Li Xiaoling, 55, based in Guangdong Province, has undertaken human rights advocacy and provided support to persecuted defenders since 2012. She has been in police custody since June 4, 2017, in retaliation for exercising free expression and for her activism. She is now being held at Zhuhai City No. 1 Detention Center. Once a successful businesswoman, Li Xiaoling turned to human rights work after she encountered obstacles in her efforts to expose judicial malfeasance in a legal case involving a personal tragedy. Li has vigorously advocated for the rights of marginalized social groups and victims of government persecution, while speaking up in exposing human rights abuses by authorities.

Li Xiaoling has been outspoken in support of efforts to seek justice for persecuted petitioners—those who bring complaints of alleged rights abuses to authorities beyond the local level. She has devoted herself to supporting incarcerated human rights defenders. Li has taken part in many nationwide advocacy campaigns, including when HRDs in 2013 called on high-ranking Chinese officials to publicly disclose information on their wealth and urged the government to ratify the International Covenant on Civil and Political Rights.

“Li Xiaoling has not wavered from supporting other human rights defenders in so many ways over the years—speaking up for them, collecting and taking donations to detention facilities, and contacting lawyers for legal assistance. She has even contributed her own meager retirement funds to help those in need.” – Chinese activist

Li Xiaoling was detained in 2017 on the 28th anniversary of the Tiananmen Massacre, soon after posting photos online of her standing at Tiananmen Square and holding a sign reading, “June 4th Marching to the Light.” She was formally arrested in Zhuhai on September 12 on suspicion of “picking quarrels and provoking trouble.” In November, police transferred her case to the local procuratorate, recommending indictment. Li has reportedly been ill-treated in custody, including by being deprived of medical treatment for glaucoma, a condition that has deteriorated during her current detention. Li also suffers from painful tumors on her body. A local court refused to look into a lawsuit that her lawyers filed against the police, alleging torture of Li, and authorities have rejected applications for Li to be granted a bail on medical grounds.

The Cao Shunli Memorial Award acknowledges the efforts of human rights defenders in China who have demonstrated a deep commitment to promoting human rights, typically in the face of great personal risk. The award has been announced annually on March 14, the anniversary of Cao’s death from torture in detention, and a date that some Chinese activists have designated “Human Rights Defenders Day” in her memory. In 2015, disability and labor rights activist Zhou Weilin (周维林) was the first recipient of the award. Imprisoned housing rights activist Jia Lingmin (贾灵敏) received the award in 2016, and women’s and housing rights activist Su Changlan (苏昌兰) was bestowed the honor in 2017.