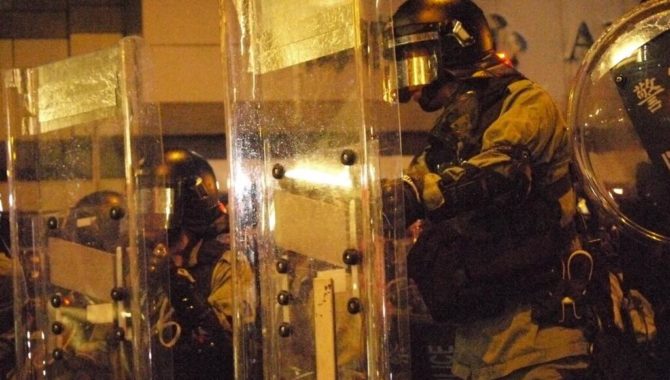 (Chinese Human Rights Defenders—October 5 , 2019) Hong Kong’s Chief Executive Carrie Lam should reverse her decision to use emergency powers to introduce the Prohibition on Face Covering Regulation, which went into effect at midnight on October 5. The use of emergency powers to bypass the legislative system to deter people from protesting sets a dangerous precedent, and creates an overly broad regulation that violates the right to peaceful assembly as guaranteed by the Basic Law, Hong Kong Bill of Rights Ordinance, and International Covenant on Civil and Political Rights (ICCPR).

The Prohibition on Face Covering Regulation infringes on the right to peaceful assembly because it is not proportional and the least intrusive restriction and may deter Hong Kongers from exercising their rights over fear of prosecution. Many people in Hong Kong wear masks at protests to protect themselves from reprisals, as some individuals have lost their jobs, had personal information exposed, or students may face punishment for participating in the protests or supporting them. The UN human rights office reminded the Hong Kong government after the ban was announced that “freedom of peaceful assembly is a fundamental right and should be enjoyed without restriction to the greatest extent possible.” There have been two judicial challenges to the regulation in Hong Kong, although one has already been struck down by the High Court.

According to the UN expert on the right to peaceful assembly, “there may be legitimate and non-criminal reasons for wearing a mask or face covering during a demonstration, including fear of retribution.” Under European human rights standards, face masks should not be prohibited if it is not worn for the purpose of “preventing the identification of a person whose conduct creates probable cause for arrest” and wearing a mask doesn’t create “clear and present danger of imminent unlawful conduct.” The regulation applies to anyone attending any protest in Hong Kong, and as such, is disproportionate and extremely intrusive. Attending an authorized demonstration does not give probable cause for arrest or imminent unlawful conduct.

The Prohibition on Face Covering Regulation applies to all public meetings and processions regulated under the Public Order Ordinance (POO), with violators facing a prison term of one year and a fine of up to HK$25,000 (USD$3,188). The regulation defines a facial covering as a “mask or any other article of any kind (including paint) that covers all or part of a person’s face.” Exemptions are allowed for those who use masks in employment for their physical safety while working—and should thus apply to journalists and first aiders—and for religious and health reasons. Individuals can also be charged up to one year after the alleged offence, and an additional six-month prison term and HK$10,000 (USD$1,275) fine for those who do not comply with police commands to remove their masks.

Carrie Lam used the 1922 colonial-era Emergency Regulations Ordinance (ERO) to introduce the regulation. The ERO grants the chief executive vast powers to “make any regulations” if s/he considers it to be “an occasion of emergency or public danger.” Under the Basic Law, the chief executive cannot declare a state of emergency, as such, Carrie Lam invoked the ERO to declare a “state of serious public danger.” The legislation does not have a specified end period, as expected when such a state of serious public danger or emergency has ended. It is an abuse of executive power to bypasses legislative authorization to introduce a piece of legislation.

Under the ICCPR and the Bill of Rights Ordinance, which directly introduced the provisions of the ICCPR into Hong Kong domestic law, emergency derogations from the rights to free expression and peaceful assembly can only be done “In time of public emergency which threatens the life of the nation and the existence of which is officially proclaimed.” Hong Kong’s Bill of Rights Ordinance (1991) repealed any pre-existing legislation that was not consistent with its provisions. The ERO was written before any modern international human rights law came into existence and has not been used since deadly riots in 1967, before the ICCPR came into force in Hong Kong. It likely is not legally valid as it does not comply with the strict provisions regarding derogation to human rights.

Since June, large public protests have been held in Hong Kong initially against a proposed extradition bill, which have since morphed into a larger movement calling for full democratic rights for Hong Kong people and for accountability for excessive use of force by the Hong Kong Police Force in suppressing the demonstrations. The newly announced regulation has escalated tensions, as protests and violence broke out across the city on the night the ban came into effect.

The use of emergency legislation to restrict the human rights and fundamental freedoms of the people of Hong Kong is the start of a slippery slope of removing Hong Kong’s human rights safeguards enshrined under international and domestic law and guaranteed by the “one country, two systems.” The government should reverse its decision and ensure that the rights to freedom of expression and peaceful assembly are protected in Hong Kong.